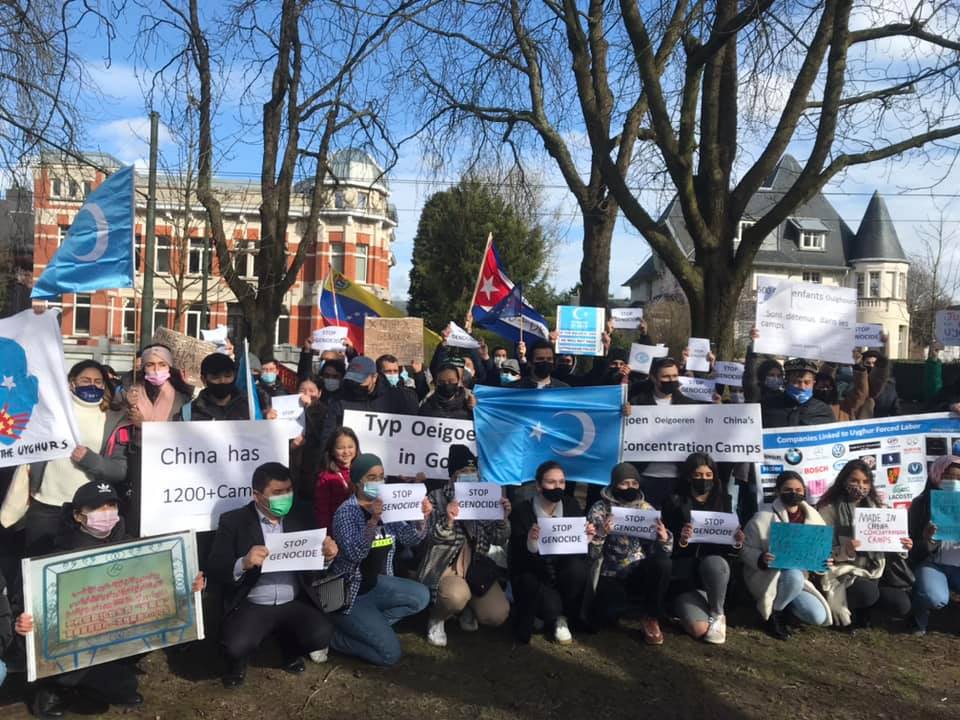 The situation of Uyghurs in China’s western Xinjiang province has been gaining an increasing amount of international attention in recent years. Just a few years ago, accounts of forced sterilisation, forced labour, systematic rape and other atrocities were unheard of. In recent years however, a new picture has emerged of China’s treatment of its Uyghur population. Louisa Coan Greve, director of global advocacy at the Uyghur Human Rights Project, claims the country aims to erase Uyghur culture completely.

The campaign to round up Uyghurs in Xinjiang, also known as East Turkestan by the Uyghur population, seems to have begun around march 2017. East Turkestan has been a contested region dating all the way back to the communist revolution in 1949. After being a republic for a little over five years following World War 2, it was absorbed by the Chinese state under Mao Zedong, losing its independence and becoming Xinjiang province.

Following the Chinese revolution, the people of the region would become increasingly more subjugated. Abdymutalip Imerov, head of the Belgian Uyghur association, says, ‘I came from Kazakhstan, but my parents emigrated from China in 1962. After 1949 the communists were slowly starting to clean out everyone important with some money or businesses. People like that were imprisoned and everything was taken from them.’

Relations thawed in the following decades, with Uyghurs regaining some freedoms such as the right to pilgrimage. However, after the wave of anti-communist sentiment following the fall of the USSR, separatist movements in the Xinjiang region began feeling emboldened. These movements include the Islamic Reformist Party, the Turkistan Islamic Party, and the East Turkestan Islamic Movement, the latter two of which have been designated terrorist organisations by the US. These organisations all share the goal of independence from China.

The tensions between the Chinese state and a number of separatist movements led to a wave of political violence between 1990 and 2001, resulting in the deaths of dozens of people on both sides. Although tensions remained after this period, things would remain relatively peaceful for the remainder of the decade until 2009.

Abdulkayyum Jappar from the Uyghur culture and information centre in Haarlem, says, ‘in Urumqi there was a peaceful demonstration on the fifth of July 2009, but it got violently suppressed by the Chinese government. Afterwards, the government classified the protest as riots, but it was a peaceful action organised by students.’ Jappar also claims that first-hand witnesses later came to testify to the centre in Haarlem.

From tensions to detentions

This unrest and a number of other events appear to have been the catalyst for more widespread repression of the Uyghur population. After seven years of ongoing tensions following the Urumqi event, the Chinese government seems to have intensified its crackdown on Uyghur people. From March 2017 onwards, the country started imprisoning over one million without due process in what is now being called the largest mass incarceration event since the holocaust.

Uyghurs and other non-Han minorities are being rounded up en masse and relocated to so-called re-education centers. According to the Xinjiang data project at least 380 of these camps litter the East Turkestan landscape. The Xinjiang Data Project is a US-funded Australian project focused on China. Despite Chinese officials claiming that the so-called re-education system was winding down, a number of new camps seem to be under construction.

While some of the camps seem to lack any fencing or perimeter walls, evidence seems to suggest that a large number of prisoners are being charged and transferred to higher security locations. Others are being hauled to factories where they are forced to perform hard labour, while hundreds of thousands are coerced to work in the region’s vast cotton fields. There have even been claims of widespread systematic rape, sexual abuse, and torture, according to one BBC article.

‘This is not a unique story to me. I know dozens of people with the exact same story’

According to Abdulkayyum Jappar, the situation is so bad now that millions of people are trapped, including several of his family members. ‘My brother has been jailed for five years now, my mother in law just got sentenced to fifteen years. My wife’s sister, who had just given birth, has also been jailed recently.’ Jappar goes on to say that multiple family members’ whereabouts are completely unknown, and he does not even know if they are still alive.

Babur Ilchi, program director for Campaign for Uyghurs, has a similar story. ‘My uncles were detained and my grandfather died in detention.’ According to Ilchi, these events prompted him to take a more active stance in the Uyghur community.  ‘This is not a unique story to me, I know dozens of people with the exact same story.’

Omer Yusuf, originally from Mekit, China, is currently residing in Turkey. His story shares a remarkable similarity to other Uyghur stories. Yusuf’s father and two siblings were arrested and are currently being detained for trivial charges. Yusuf regularly testifies on behalf of his family on the Uyghur pulse Youtube channel.

Abdymutalip Imerov says that several western countries are finally starting to recognize the genocide for what it is. Among them are the US, Canada, the Netherlands, and it will soon be discussed in the Belgian parliament. ‘That is why we manifest, to change public opinion. It is not a story, it is real, and it is happening now in the 21nd century.’ Imerov claims that the refugee organisations in the west cannot do much, but that the responsibility lies elsewhere. What the western governments, the EU commission and others need to do is to take concrete actions.

According to Babur Ilchi, however, progress is becoming more apparent. The US government recently deemed the situation a genocide, and both the Canadian and Dutch parliaments passed motions to do the same. ‘The US probably did the most out of all countries. First they passed the Uyghur Human Rights Policy Act, second the Uyghur Forced Labour Prevention Act.’

The Uyghur Forced Labour Prevention Act aims to ban all imports from East Turkestan because there is no way to separate companies that are using forced labour from those that are not. ‘The reason why this is a big deal is because East Turkestan accounts for 20 percent of global cotton supply. So one in five garments are made with cotton from East Turkestan,’ Ilchi says.

But economic policy is not the only area where action is being taken. Louisa Coan Greve says that the amount of countries voting in favour of China in the UN Human Rights Council has been going down every year. During recent years, fewer countries have been voting in favour of China. ‘That’s the progress, or at least one small sign that we’ve seen. Governments are recognising that the worst violators of human rights should not be sitting on the Human Rights Council to monitor human rights around the world.’

The US, Canada and the UK also recently joined the EU in sanctioning a number of Chinese officials over the crisis. These sanctions are the first to be imposed by the EU since those imposed during 1989 for China’s brutal repression of the Tiananmen Square demonstrations. The Chinese government responded by imposing its own sanctions on several EU officials.

‘There should be diplomatic consequences’

Greve goes on to say that, despite gains in some areas, other international institutions who have a mandate to monitor gross human rights violations have been silent, in particular the International Labour Organisation and the UN Security Council. ‘There is no UN fact checking body that has laid out the facts. There has been no resolution in the UN General Assembly, there has been no resolution of condemnation in the UN Human Rights Council’, she says.

‘Voting politics in the UN have prevented any serious global condemnation. There are already economic consequences, but there should be diplomatic consequences’, she concludes. Both Greve and Ilchi also think that the 2022 Winter Olympics in Beijing should be boycotted, going so far as to compare them to the 1936 Berlin Olympics.

Abdulkayyum Jappar, meanwhile, is worried that Chinese economic influence over Europe is becoming too great, making it harder for Europe to take action against human rights abuses. The recent EU-China Comprehensive Investment Agreement especially does not sit well with Jappar, claiming that it chains some European countries by hands and feet to do China’s bidding. The agreement will make it easier for Chinese interests to invest in European businesses and vice-versa. ‘China does not only pose a threat to the Uyghurs. In the long term, it can also threaten Europe. China already has a lot of influence in the region. If Europe does not wake up in time it might become another victim,’ he warns.

The Chinese embassy in Belgium and the Chinese mission in Geneva did not respond to repeated requests for comments on the situation in the province of Xinjiang.

Andy Murray: ‘Without hitting a line judge at US Open Djokovic would have 19 Grand Slam titles by now’