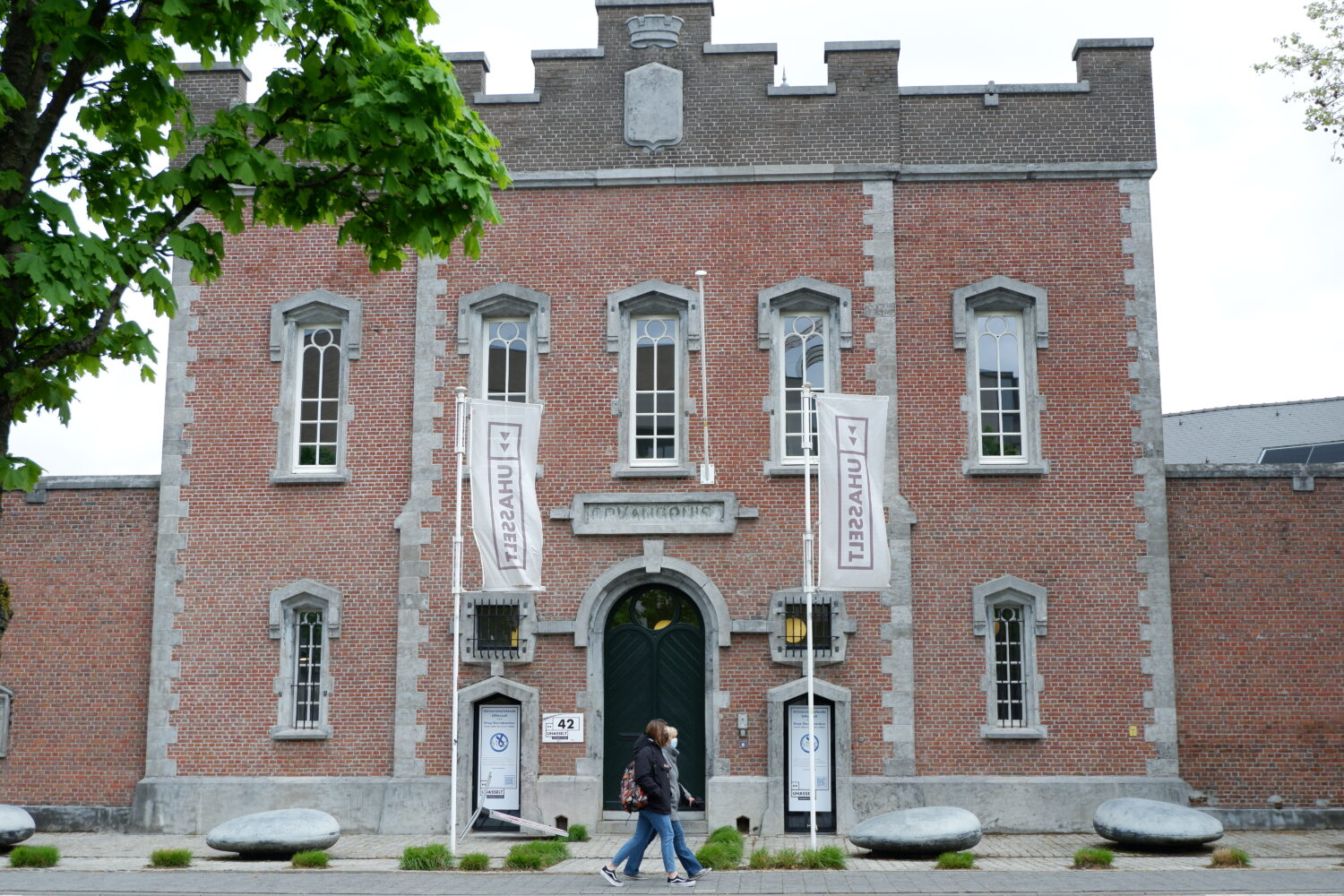 Behind large brick walls that once served as a prison for thousands of criminals, now lies the Faculty of Law of Hasselt University. On a guided tour of this unique renovation project, joining us is Karin De Greeve, author of a book about the prison and chairwoman of the Heritage Council. This report is part of the series Reporting the city, in which our 21bis reporters look for compelling redevelopment projects.

On the edge of Hasselt’s city centre stands its former detention centre. The building served as a prison for nearly 150 years before being officially sold to Hasselt University in 2005. The renovation itself started in 2007 and was completed in 2012, becoming the university’s brand-new city campus. The exterior façade remains almost unchanged, with thick prison walls connecting four large watchtowers found on each corner. The only noticeable difference is the multiple UHasselt-flags hanging on the outer gate, fluttering loudly as my colleague and I enter the campus and meet De Greeve in the panopticon.

See below how the facade of the building remains almost identical:

Panopticon
Being a star-shaped building, often referred to as a Ducpétiaux design, the panopticon serves as the heart of this former prison. It was through this design that the 18th century English philosopher Jeremy Bentham believed that one guard would be able to keep an eye on all prisoners who could not tell whether they were being watched or not. ‘If a guard was placed here, in the centre, the inmates never knew if the guard was looking at them or the person next to them,’ says De Greeve. With its high dome ceiling, the chapel reaches over two floors that are connected by rounded stairways. ‘It is here that mass was celebrated,’ De Greeve adds, ‘although it also served as a place for teachings and readings to the inmates.’

Inverted Ducpétiaux
Although the intention of applying the Ducpétiaux-design was there, in reality, architect  François Derré’s building failed to implement this system. ‘The cell ducts that he built did not allow guards to look directly into the cells as they were blocked by a wall,’ De Greeve explains. ‘This prison became known to be an inverted Ducpétiaux.’

‘The cells were essentially dungeons’

The panopticon in which we stand branches into four different cell ducts. These are now bright hallways that each have their colour. As we walk into the yellow corridor, the uniquely tiled floor catches our attention. ‘Although these aren’t the original tiles, their patterns were drawn by an artist,’ De Greeve tells us, ‘we are walking on an artwork,’ she adds. The glass wall allowing plenty of daylight into the cells used to be a very different story according to De Greeve. ‘This wall was previously out of stone and these corridors used to be extremely low and thus very dark. Each cell did have one tiny window above the door, but despite this, hardly any daylight entered. These spaces were essentially dungeons.’

Study cells
The cells that we walk past now are not filled with criminals but are instead occupied by diligent law students studying for their upcoming exams. One of these students is Büsra Yasar, currently studying law at University Hasselt. She finds it incredibly unique that she has the opportunity to study law in a former prison. ‘I like to study here because I have my own place which you do not have in a library.’

The small spaces have been transformed into separate study units containing only a wooden desk, a chair and multiple power outlets. According to De Greeve, not a single detail has been overlooked in the design process. ‘The desks have the same measurements as the prisoners’ bed that used to fill this room.’ Although it is difficult to imagine, the units in which we currently stand were sometimes inhabited by multiple prisoners. De Greve explains: ‘The original intention was: one person per cell. However, over the years, the cells became overpopulated, sometimes housing two or even three prisoners at once.’

Take a look at how the prison cells used to be then and how they are now:

Only bread and water
When walking through the narrow corridor with small doors, it’s hard to imagine that those small doors lead to the big auditorium which is crammed between the ‘arms’ of the Ducpétiaux complex and offers seats to 370 students. The current covid situation forcing students to sit as far away from each other as possible and thus resulting in barely any social contact between them makes it easier to empathise with the prisoners. De Greeve takes us back into time: ‘The prisoners were allowed to get some fresh air in the patio where today the auditorium is built. They were led out one by one, making it impossible for them to communicate with each other. If one shouted to the other, they were only given bread and water.’

The inmates were not allowed to have any form of contact with each other. This is in line with Ducpétiaux’ philosophy that detainees kept in isolation would reconsider their actions and would not commit crimes again when given a second chance upon their release. Paradoxically, the lack of interaction didn’t make them any happier. The literal application of this theory made the prison guards cover the heads of the prisoners while starting at the end of the corridor when leading them outside.

World War II
Behind the auditorium, a wide window covered with the returning pattern of tallies grants us access to one of the courtyards. We can already imagine the students sitting on the stairs, enjoying the sunlight on their skin. But now, with the weather changing every minute and no students strolling around the campus, the courtyard gives us a sad impression. This feeling resonates with the history hiding behind every object here.

‘An artwork of red deer with striking antlers replaces the cherry tree’, De Greeve points out. ‘During the Second World War, the Resistance was held captive in this prison. A group of five men was sent to liberate their fellow organisation members but stumbled upon a German soldier high up in the cherry tree. Despite being shot down, the soldier managed to warn everyone. Immediately the five members of the commando were executed and their bodies showcased at the entrance of the prison for every passer-by to see.’

‘t Gerecht
The courtyard at the other side of the building, now functions as an outdoor refectory. ‘t Gerecht, the canteen’s name, refers to the Dutch meaning of ‘the dish’ as well as ‘the court’. The kitchen can be found at the same place where the prison kitchen used to be. During the period where only men occupied the cells, food was prepared by members of staff. Later on, when the pink corridor was populated by women, they were responsible for cooking the meals as part of their chores.

‘What was very strict, was that no men could enter the women unit’, says Karin De Greeve while we see the pink tiles covering the floor from the corner of our eyes. ‘The only men allowed to go through that door were the prison director, the chaplain and the doctor.’

The pink corridor leads back to the panopticon where we were first introduced to Karin De Greeve. To end our guided tour, she reveals her appreciation for the renovation and the way the architects upgraded the old prison into the campus it is today.

Explore the history of Hasselt old prison in the timeline below: