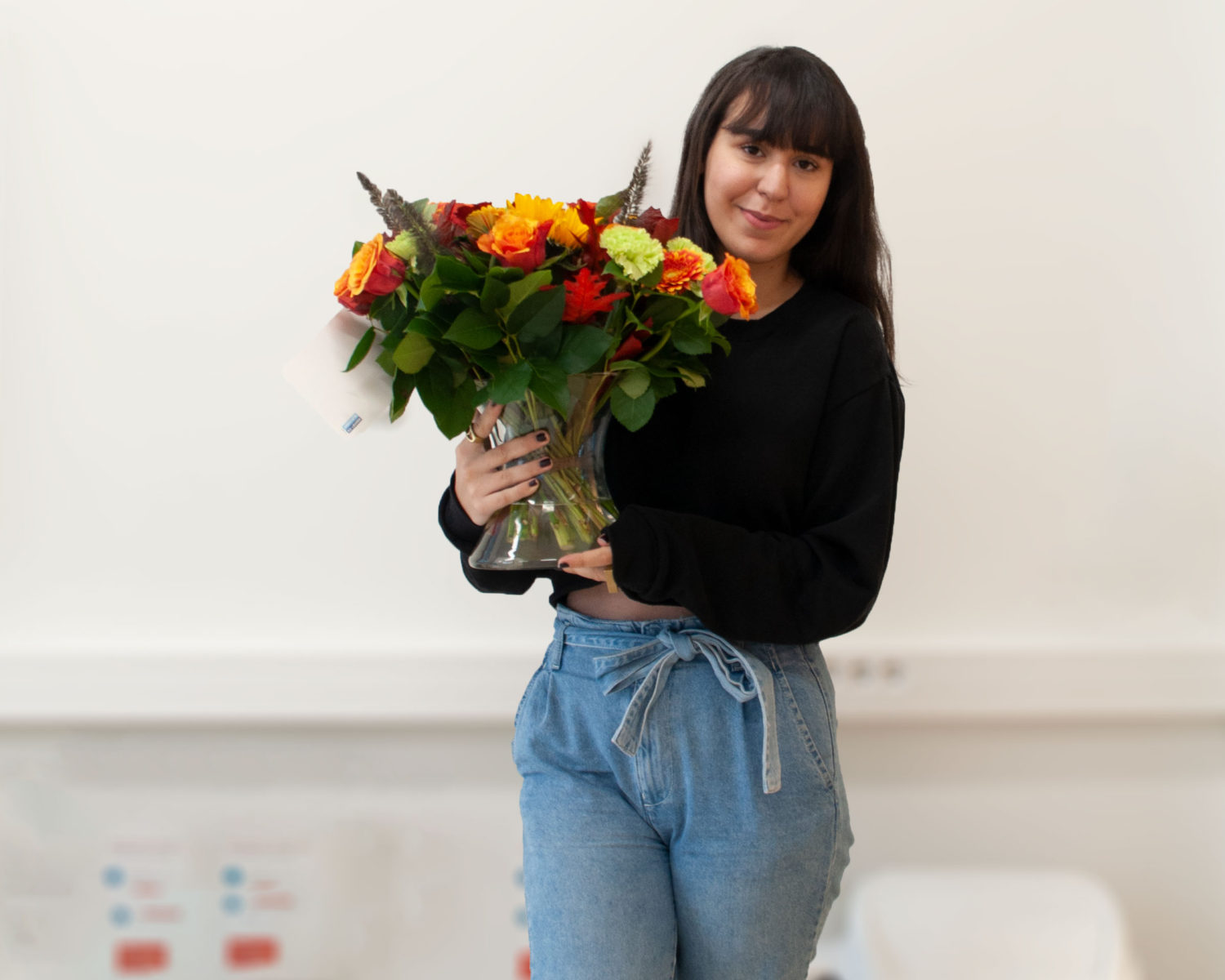 This week, Thomas More Mechelen Antwerpen celebrated the arrival of Hadis Mansouri (19), the 10.000th student to enroll in this college. A few years ago, Hadis and her family left Iran and came to live in Belgium. She’s currently studying International Communication and Media. The school made sure she got a bouquet of flowers and Hadis and her classmates received chocolate. ‘I didn’t know such a thing existed so I was surprised like, wow that’s cool.’

Five years ago Hadis, her brother and parents came to Belgium. They had to move here because of her father’s job. ‘My parents were coming here for three years but then when they left me and my brother stayed in Belgium to study.’ Now Hadis is living on Antwerp while her brother stays in Brussels. They’re both living alone and Hadis misses her parents very much. ‘I asked them if I can come back too but they wanted me to stay and study and maybe later, after my studies, I can come back. But I miss them so much all the time.’

A bright future
Hadis is interested in photography and business, how to become successful. She studied photography for two years in Antwerp but then decided to quit. That’s why she chose to study International Communication and Media. ’I have this idea since I was sixteen to make an application which was related to photography. At that time I couldn’t be successful. But I wanted to learn how to do that and make that happen so I think this course really matches what I need and what I want to do.’

‘Now, things are starting to get a little bit better.’

After her studies, Hadis wants to make her own business with an application related to photography. ‘After my studies, I’m planning to make that application and try to be successful this time. I really want to have my own business and company.’

She maybe wants to go back and work in Iran or maybe work in an English speaking country. ‘The two things that I’m considering where I wanna live is an English speaking country because of course I’m gonna feel more comfortable there or Iran, my hometown.’ Hadis is even considering Belgium. ‘I have to learn Dutch this year so who knows, we have it inside of our course, maybe if I know Dutch, I would want to stay here as well.’

It gets better
Although Hadis has been living in Belgium, she still doesn’t feel at home here, she even felt homesick. But now, things are starting to get a little bit better. ‘I had so many problems and I was alone at the same time. My parents were far away and my brother also was living in another city so I really got homesick. But since I came here to this school I feel so much better. Everything is going to be better. I’m even luckier you know? Even in this case, being the 10.000th student at Thomas More, now I’m feeling better. But the last four years were difficult. I always wanted to go back to Iran all the time. But now I can stay here and study and then I’ll see.’

If you currently are experiencing the same things as Hadis did, she recommends finding some friends. ‘That’s the most important thing. If you don’t have friends, you’re gonna be homesick and miserable and you wanna go back to your country of course. Try to communicate with people and study.’

Hadis also stays in touch with her home country. ‘I watch Iranian movies and movies or series that are currently playing on tv and that’s all I do. Or even listening to Iranian music. I also follow Iranian influencers on Instagram so I’m not that far.’

‘Women can still go to work and people can still drink but in private.’

Western media
Iran is often portrayed negatively in western media. But Iran isn’t all that negative in reality. ‘Every country has, of course, negative points and aspects. Iran has it as well but it’s not that negative.’ According to Hadis, there are currently two bad things happening in Iran. ‘The economic situation right now is not that good because America and other countries are not cooperating at the moment and they don’t want to sell anything to Iran, so that’s only bad for us actually, not even for the other people.’ Journalist and researcher Robert Carter agrees. Headlines, as he uses in his tweet like here, aren’t seen often when it’s about countries like Iran.

The second aspect in Iran is that women have to wear a hijab, a head covering that often is worn outside. ‘It’s not that women have to cover all the hair or they can’t do anything in that country. It’s something symbolic, they just have a scarf on their head but still, you can see hair or even part of bodies. And women can still go to work and people can still drink but in private, not in public. It’s pretty similar but a little different. We do it in a different way.’

Hadis doesn’t feel good about the fact that Iran isn’t portrayed as it most of the time is: beautiful. ‘I try to explain that it’s not as bad as they explain it on social media. I mean there are some bad things that every country has but still, it’s a good country, a beautiful country. If you go there, you’re gonna really enjoy it. It’s a lovely country.‘

Are you planning on moving abroad? Or just curious about different cultures? Our team from Being Away From Home will tackle some interesting articles for international students. Check our previous article: Discovering Belgian specialties.