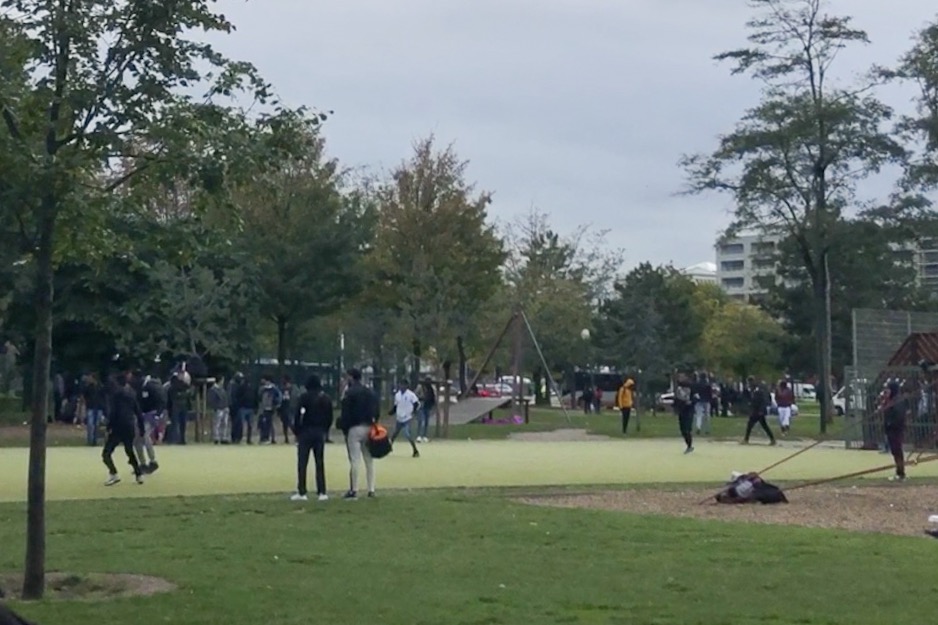 Located a few hundred meters from the Gare du Nord, the Maximilian Park has been over the past three years one of Brussels’ main drop point for migrants and refugees willing to start a new life in the United Kingdom. Many of them stay in the park for months, in very rough living conditions, hoping to finally catch “the good truck” that will allow them to cross the Channel.

It’s a small park in a mainly residential area, hidden between the nearby Brussels’ port industry facilities and the skyscrapers of the north of the capital. Slightly hilly, woody, equipped with brand new street workout material: nothing would distinguish it from the many other green spots of the city, if it wasn’t with all those tents set up in front of the gates, with those sleeping bags in which men are sleeping right on the ground, with that crowd of hundreds of migrants and refugees hanging around and remaining in the park all the time.

Some of those men used to live in Iraq, Pakistan or Afghanistan. Others travelled all the way from eastern Ethiopia, Eritrea, Sudan or Niger. They all have different stories but regardless of what it took them to arrive here and wherever they come from, most of them share two things: they dream of getting smuggled into the United-Kingdom and meanwhile they are sleeping in Parc Maximilien, without the basic services exposed to the elements, at the mercy of cold and rain.

By luck, cold and rain are absent the day we pay the park and its inhabitants our first visit. The sun is shining into a cloudless blue sky, allowing the afternoon to be surprisingly warm compared to the seasonal Belgian standards. As a consequence, an atmosphere we can imagine being lighter than usual floats in the park. Under the trees, sitting in a circle, a group of men listens to music and smokes chicha. They are all from Syria. ‘Everybody is, in this corner of the park’, explains Fadi, one of them. ‘Here, fights happen very often. People are tired, they get drunk and it can be dangerous. By staying together, we remain safe.’

There’s no danger right now, though, and the Syrian crew is relaxed. The smiles on everybody’s faces contrast with the horror of the stories being delivered. Most of them were opponents to Bachar al Assad. Prosecuted by the regime that in many cases killed several members of their family, they had to flee for their lives. some went through prison and torture. They explain it calmly, as they can not afford to whine on the past. Not yet. Not until they are not in England.

Luck on the truck
For all the migrants of the Maximilian Park, who barely speak a word of French or Dutch, England is an eldorado. The finishing line of their long run, the place where they’ll be able to ‘start a new life’, to find a job that would allow them to send money to what remains of their family. Therefore, while their day is spent in the park, they dedicate their night to ‘trying’. ‘Trying’ means getting into a truck, hoping that this truck is going to England, that the driver won’t notice anything, that the police will not search it. Most of the time those conditions don’t meet, but everybody lives in the hope that they finally will. We leave Fadi and his mates precisely as the sun goes down and as the whole park starts preparing for another night of endless tries.

Not a good place for a camera
New day, different atmosphere. A thin and icy rain replaces the sun and the crowd is now wading in the mud. The tense faces reveal that for everybody here, the day was hard. We come back to interview people but the general mood is not too confident anymore. Except for this guy. He’s from Ethiopia and claims to have crossed more than ten countries before arriving in Belgium. Would he accept to share his story? ‘Yes, sir!’ Is it okay if we film him? ‘No problem.’ Others object though, and it’s not long until the interview gets interrupted. We get warned. Promises to blur any background face won’t be enough: better move before things escalate.

As night falls, a growing tension has taken hold of the park and will finally burst into a violent fight letting one man lying on the ground, the cause of which nobody really know. Drugs perhaps, alcohol maybe, exhaustion, probably. Anyway. It’s fully dark now. Time for all the Maximilian park migrants to ‘try’. And for us to leave.