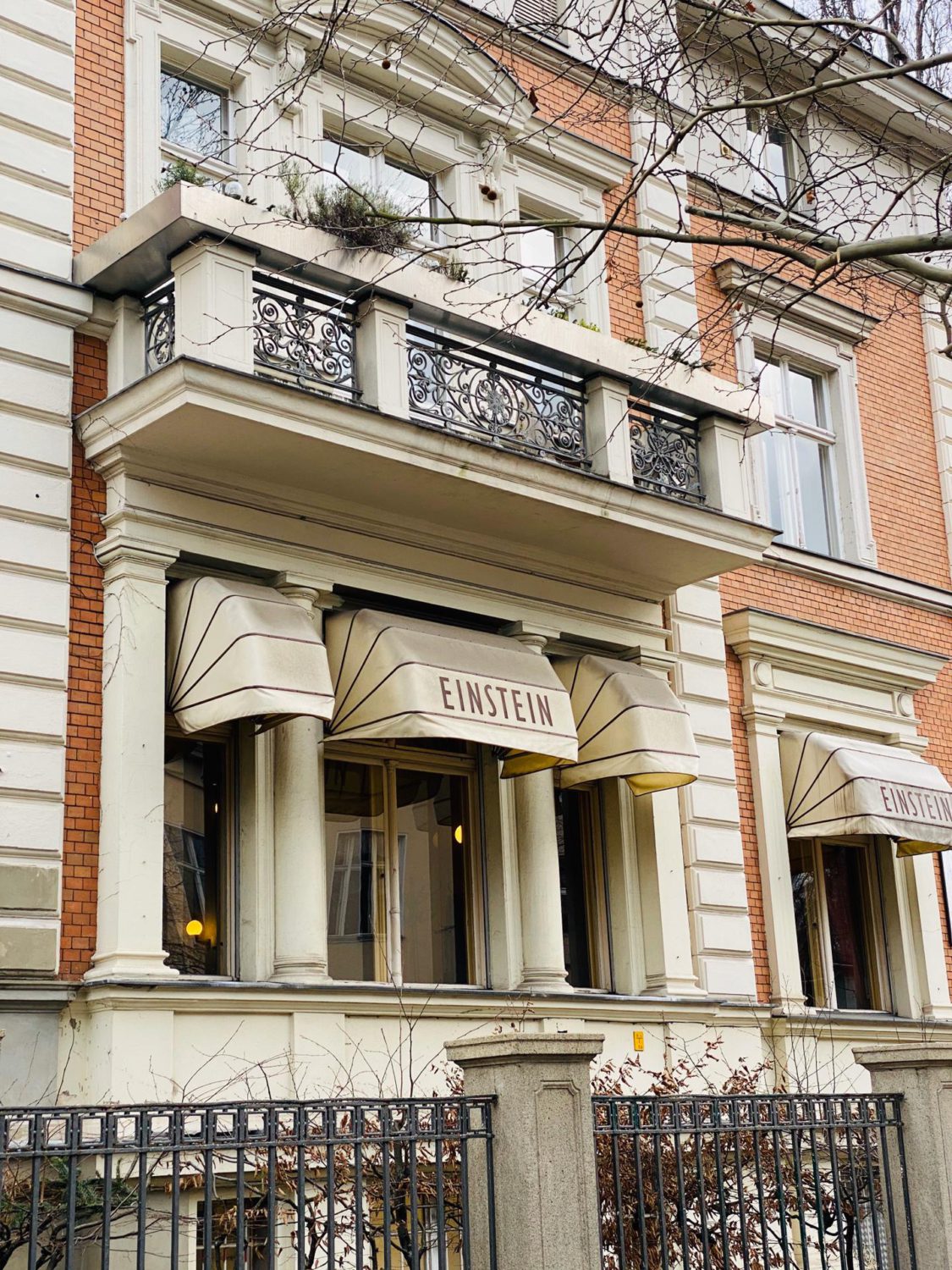 Ever wondered where Quenten Tarantino’s Inglorious Basterds was filmed and where Angela Merkel likes to drink her coffee? Then you should visit this hidden gem located in the heart of Berlin close to the infamous Potsdamer Platz.

In the middle of busy Berlin lays the Kurfürstenstraße with a much serener atmosphere. This is where Café Einstein is located. As a millennial we have a vague idea of what buildings looked like back in the day. But this building looks like it hasn’t changed much since 1878. A well-preserved building with a contemporary filter.

Upon entering the building there is a relaxed atmosphere. It’s almost like you are walking into a movie from the 20th century. This is where we are welcomed by Philipp Hasse-Pratje the CEO of the cafe together with the cafe’s manager. Philipp Hasse-Pratje is a German man in his early forties; the manager is American from New York, living in Berlin. ‘Welcome to Café Einstein’, says Hasse-Pratje. They accompany us to the restaurant area, where they offer us something to drink. Immediately we walk into this old historic restaurant where the dark brown fishtail floors and the wooden bar are an immediate eye-catcher. As the four of us are sitting down at the table you can smell the coffee all around and you immediately feel like you have gone back in time.

‘It’s only since 2006 that people who committed suicide during World War Two are being recognized as victims of the Nazi regime.’ – Philipp Hasse-Pratje

Back in the day Café Einstein Stammhaus was the residence of a Jewish sewing machine factory owner, he owned the biggest sewing factory in Europe called Rossman. A few years later the Blumenfeld family moved into the building. The family ran a private bank at Friederichstrasse. This couple was Jewish as well. Today there lay two tiles outside the building to commemorate the couple, who committed suicide during the Second World War. It’s only since 2006 that people who committed suicide during WWII are being recognized as victims of the Nazi regime. 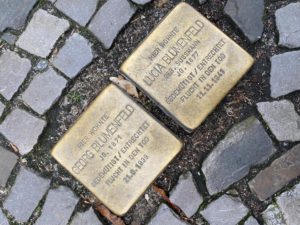 Ushi Bachauer was the woman who created the cafe as we now know it. “She was an Austrian woman who was the first to open a coffee house here. She did that in 1978 together with three friends. It was more like a cultural centre back then. They held a lot of cultural events such as reading books, music and theatre. Her husband ran a very well-known radio show called Radio Lias, so he supported the whole project”, Hasse-Pratje says.

After the fall of the Wall

Berlin became a whole different place after the fall of the infamous Wall 1989 and eventually evolved to the modern metropole as we know it today. The Café Einstein Stammhaus endured and adapted itself to the many changes in the city’s history.

As the Café was opened in 1978 it found itself in the middle of the Cold War. Although the Café is located in the Western part of Berlin it is very close to the former border between the West and the East. The period after the fall of the Wall was one of the most profitable periods since the Café was founded, thus the owner: ‘ We were always fully packed with people. People were standing in three rows at the bar and sitting outside on the stairs and eating their cake because it was so busy inside.’ To this day the Café still has some regular clients from back then. 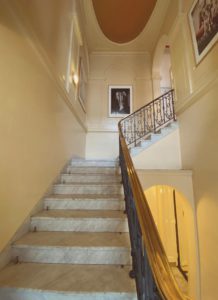 Against all odds: still standing

However it was not all fun and games for the Café Stammhaus Einstein company. In 2002 the company went bankrupt simply because it grew too fast. The investor kept on promising money and opened three more coffeeshops, until he realized the money wasn’t coming in. “The fact that the company was in such a bad place at the time gave me the opportunity to buy all the shares and save the company. This is where it all started for me”, says the CEO.

The exterior and interior are almost in its original state. The first floor and the library room still have their wooden plating from 1910-1920. The floors are still the same pattern, but it’s already been through a little bit of renovation because it was damaged here and there. And speaking of keeping the original interior, what about the clientele?

‘’It’s very mixed due to the whole cultural program that Ushi started. Let’s say for music events a lot of left alternative students might have the same taste as the right conservative elder states men. So pretty much everyone came and that still has not changed,’’ Philipp says

The café prides itself with its privacy policy and since there is no paparazzi allowed a lot of important and famous people have visited the cafe such as the president of Israel Reuven Rivlin, the number two from China and of course German chancellor Angela Merkel. She often comes in to have her lunch or her coffee, they usually call in maximum an hour before hand since they do not want anyone leaking information about her whereabouts.

The cafe is quite expensive so you don’t really see a lot of teenagers or young adults but it does happen whenever there is a cultural event being hosted. Some examples are weddings, company Christmas parties, birthdays, film parties.

One very famous movie director, Quenten Tarantino, shot a few scenes from Inglorious Basterds there. They not only filmed there but they also left a few of their decor items. The curtains that are still hanging in the cafe are one of the decor items that were left behind. 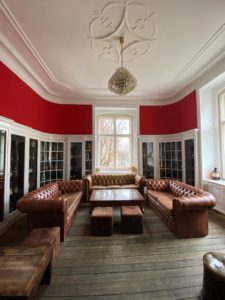 As our conversation was coming to and end we asked if there were any remnants of the time when the cafe was being used as an SS office. Philipp then showed us a big walk-in safe in the cellar that they now use as a storage place for all the cleaning supplies. A big steel door with bolts all over used to hold important paperwork form the officers. 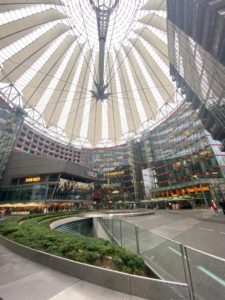 The history of the Potsdamer Platz started out very bright. Before the first World War the famous square housed one of the biggest trading centres in Europe. It even was the first place in all of Europe with traffic lights. The people of Berlin were very fond of the square and referred to it as ‘the busiest square in Europe’.

During World War Two the Potsdamer Platz suffered heavily from the bombings of the allied forces. After the war it became clear that the busiest square of Europe had changed into a desolate symbol of the loss of the German forces in the war.

From barbwire to a metropolitan city

The Cold War didn’t offer the people of Berlin a chance to rebuild the square in its former glory. Instead of that the infamous Wall was built right in the middle of the Potsdamer Platz. The square became a desolate place surrounded by barbwire.

If you’re standing in the square today you get the impression of a real metropolitan city. This is due to the many recently built skyscrapers. It is once again one of the biggest traffic intersections and trading centres in Berlin. This new vibe is embodied by the Sony centre. It is an enormous building. and it has a courtyard with many restaurants and shops. Especially the luminescent roof is very impressive once it gets dark. Through initiatives such as this the Potsdamer Platz is finally restored to its former glory. 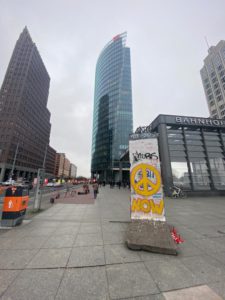