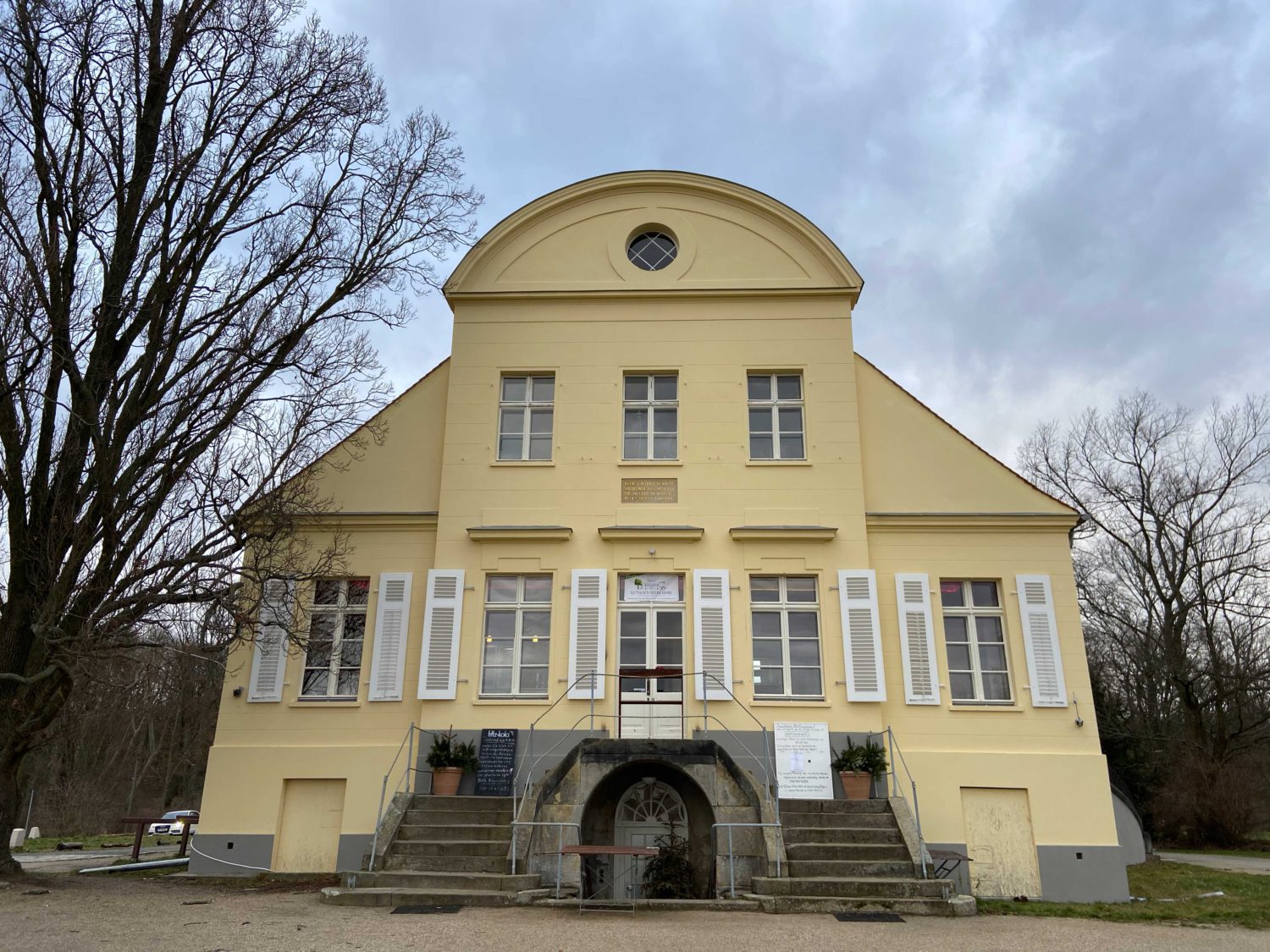 SPANDAU – When it comes to German history district Spandau in West Berlin is mostly known for the famous Nuremberg trials and its Nazi prison. But what you might not know is that art house Gutshaus Neukladow in Spandau served as a place where famous German artists developed their artistry. ‘I rediscovered the history, the Berlin history, the German history in the mirror of the Neukladow history,’ says art historian Miriam-Esther Owesle from the Guthmann Akademie.

To discover this rich cultural history yourself, you’ll have to go off the beaten path and take a local bus. Bus 134 stops right before the beautiful old town hall of Spandau and is only a few steps away from the old city center. But to get to the hidden cultural hub of the district it is best to travel a bit further into Spandau.

First stop: Gutshaus Neukladow. Right before the terminal of line 134 lies the park in which the Gutshaus was built. It’s only a small pathway removed from the main road, but you would miss it if you didn’t know it.

Birthplace of Otto von Bismarck
The Gutshaus – or manor house in English – was originally built by Anastasius Ludwig Mencken during the time of Prussia, the old German empire. Mencken was a member of the royal Prussian cabinet of King Frederick William III who gifted him the Neukladow estate in 1799.

Mencken then decided to build a manor house on the estate and commissioned architect David Gilly to design it. According to art historian Owesle it, ‘was a house from classicist architect David Gilly, a teacher of Schinkel­ (the most famous Berlin architect around 1800) and he potentially built Neukladow in 1800.’

Mencken’s children, among which Wilhelmine Luise Mencken, spent their childhood in the Gutshaus. Wilhelmine ended up marrying Karl Wilhelm Ferdinand von Bismarck in 1806 and the couple is now known as the parents of the infamous Reich Chancellor Otto von Bismarck.

Renovations by Grenander
After the departure of the von Bismarcks, the manor changed owners at least seventeen times. In 1887 it eventually ended up in the hands of the wealthy cement manufacturer Robert Guthmann. ‘He wanted to tear it down and rebuild houses there to make money but his son, art historian and aestheticist Johannes Guthmann, didn’t want that and he arranged that he could have it for a time in 1909,’ explains Owesle. Johannes Guthmann, Robert Guthmann’s son, went on to renovate the manor.

‘The interior design of Neukladow was made by Alfred Grenander. He is renowned because he constructed more than 70 U-Bahn stations, some of which are famous now. He was a modern architect and a very good friend of Guthmann,’ explains Owesle.

Cultural playground
With Johannes Guthmann in charge from 1909 onwards, Gutshaus Neukladow was in its heyday. In his memoirs, he wrote ‘Neu-Cladow und nichts anderes!’ which translates to, ‘Neukladow and nothing else.’ He meant that Neukladow was his everything and nothing could compare. The manor served as a meeting place and cultural playground for his best friends, who happened to be among Berlin’s greatest artists.

According to Owesle painters like Max Slevogt, one of the most famous German impressionist artists of his time, found a place to grow in Neukladow. ‘Guthmann was the first who ordered murals from Slevogt. So Slevogt’s career as a muralist started with Guthmann’s call. In his little circle he did a lot to flourish the arts.’

‘He gave them a platform to communicate and to rest from their heavy work in the city,’ she goes on to say, ‘I think it was very creative for them. Pianist Conrad Ansorge, who was the last pupil of the renowned composer Franz Liszt, was a good friend of Guthmann and he played in Neukladow. Even Slevogt used the peaceful place to play the piano for his friends. They would open the windows and sat on the veranda.’

WWI, no place for art
After World War One, Johannes Guthmann was asked by his father to leave Gutshaus Neukladow. There were multiple reasons, one of which was that Robert Guthmann originally wanted to make money of the estate. With World War One going on he needed the land to establish a sheep farm.

One remarkable reason why Guthmann had to leave was because of his relationship with Joachim Zimmerman. ‘They were both gay,’ explains Owesle, ‘it was very astonishing. They came in contact with one another at the Berlin university in 1895 and stayed together until Zimmerman’s death in 1953. So they stayed together for over 50 years.’

‘Guthmann and Zimmerman were both gay, it was very astonishing’ — Owesle

Guthmann and his partner moved to the region of Silesia in Poland in 1921 and left the epicenter of Berlin art behind. The building was eventually sold to the city of Berlin by the Guthmann family and its rich history was slowly forgotten.

In the years leading up to the Second World War, the estate was used mostly for military purposes. Barracks were built around the manor and stayed there for many years. In 1951, the Arbeiterwohlfahrt, a welfare service, started using the grounds as a recreational summer camp for mothers who suffered from a burn out. They stayed there until 1995 and the manor and its landscape fell into decay.

From decay to potential
A few years ago, the district turned over the manor to three private individuals, who saved it from decay by renovating it. Turning it into a cozy bistro with the proceeds going to the renovation of the building. It also serves as a place for exhibitions, concerts and lectures mostly held by the Guthmann Akademie, a research institution. ‘I decided in 2015 to found an academy. My vision was to build a bridge between older people and the university which means that I invited students to hold lectures about themes that are interesting from Berlin’s culture around the 1900s,’ says Owesle.

As for what the future holds, district Spandau is renovating and updating the manor and the surrounding parc. The plan is to change Gutshaus Neukladow into a public museum in 2025 but as of now it’s unknown what kind of museum it will be.

Update: Due to the coronavirus, Gutshaus Neukladow is temporarily closed.

From the Nuremberg Trials to Spandau Prison

After your exploration of Neukladow, you can take the bus back to the Spandau city center. But do pay attention because driving back you pass a supermarket named Kaufland. Nothing special, right? Well, what you may not know is that this place once housed a prison that played a big part in the history of Germany.

The Spandau prison was built in 1876 but only gathered international attention with the Nuremberg Trials. They were military tribunals held to prosecute Nazi leadership between 1945 and 1946. Seven of the convicted ended up in the Spandau Prison to serve out their sentence. A prison once built for up to 600 inmates now only held seven, the most famous one being Rudolf Hess, the leading member of the Nazi party.

Hess’ Tesco
Eventually Hess died aged 93 in 1987 and being the last prisoner, the prison was demolished so that it couldn’t serve as a neo-Nazi shrine. The British forces decided to build a shopping center on the site and held a contest to name it. A lot of people sent in the name ‘Hessco’s’, which is a mix between the last name of the last prisoner Hess and the famous British supermarket Tesco. However, in the second week of the contest they announced that the supermarket would not be named ‘Hessco’s’.

Ordinary supermarket
In 2013, supermarket Kaufland opened its doors. What was once one of the most famous places around Berlin is now nothing more than a parking lot and supermarket. A place you could easily walk past without giving it a second glance if you didn’t know what it housed before, the infamous Spandau prison.

The Spandau district might seem unimportant but if you look a bit further you discover not only a tragic history but also a rich and cultural one that’s worth a visit.

Take a walk around Spandau

Curious what else Spandau has to offer? This interactive map will show you even more hotspots in the region. And while the coronavirus makes it hard to explore these museums, bars, and cultural hubs now, nothing keeps you from planning your next trip to this wonderful Berlin suburb.