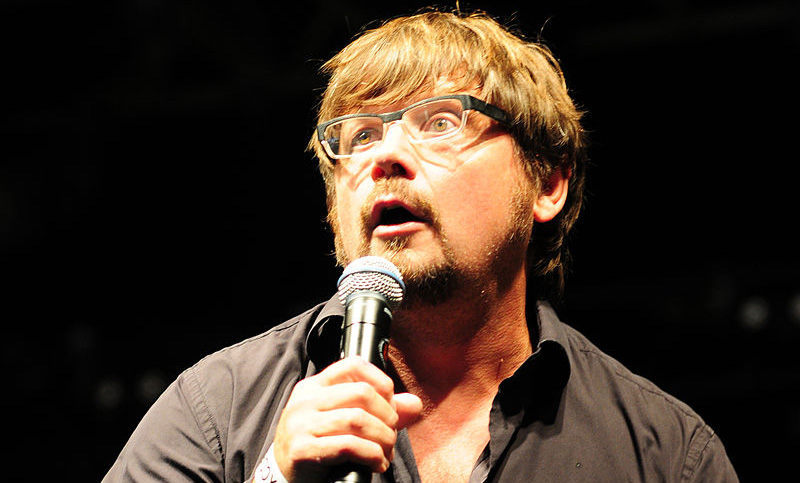 Nigel Williams started in Belgium as a factory worker when he slowly changed career paths and went into stand-up comedy in 1998. Since then, he’s had a flourishing career in stand-up comedy with people even calling him one of the founders of stand-up comedy in Flanders. But how did he experience the move to Flanders? ‘It’s okay to be racist here.’

Why did you first move to Mechelen, Belgium?

I was 22, living in England, and I had lost my job. My brother was living in Belgium at the time, so I decided to come over here on holiday. And then I thought: it’s okay here. So, I stayed, and that’s how it happened.

How difficult was it to adjust to life here compared to the United Kingdom?

Life was pretty much the same. What I did find difficult was; officially you speak Dutch. But you speak Flemish. If you’re a foreign person, that is confusing. You have two languages. I like people that play with language. In Flanders, people play with language every ten kilometers, but it’s more difficult to learn. I have a Chinese friend he learned Dutch. He went to school in the evening and learned Dutch. I was working in a factory in Mechelen, so I learned Flemish there. I could talk to people. He couldn’t.

Do you think that learning Flemish helped you understand our culture better?

Oh yeah. I have three daughters and I always brought them up in Flemish because I thought: you have to learn one language first. Learn the language where you live. A language is not just a language, there’s a lot of culture in it. So if you wanna understand people, you have to learn their language.

Would you describe yourself as an Englishman or Belgian?

European. I do believe in nationalities, but I don’t believe in nationalism, which is different. If you’re Flemish, you’re gonna have some things that other people in other countries don’t have. That’s not a problem. But we need to start thinking internationally. Start by saying you’re a European. Especially now with the coronavirus. It’s a virus it doesn’t see borders. So if we wanna survive as a species, we have to think of humans as one. Maybe that’s gonna take another thousand years.

You started stand-up comedy when it was hardly even around in Belgium. What was that like?

When I started doing stand-up comedy in Flanders, not everybody understood what it was. Stand-up comedy is completely different from what a lot of people here think it is. It is one person on a stage with a microphone, and you’re being yourself. You talk about stuff that people see and do every day, and you try to see the fun in it, or you try to see how ridiculous it is. You talk like yourself and don’t dress up. You don’t pretend to be somebody else, it’s very pure because you’re on stage on your own and it’s just you and a microphone. It’s like; wow if I fuck this up, it’s gonna be really bad. So I love it. It’s a lot of stress, but I’ve been doing it for 20 years now, and you lose the stress after a while.

You said that not everybody understood what stand-up comedy was.

They don’t get it. In a lot of places they still don’t get it. Stand-up comedy started in Belgium in 1998. That’s not very long ago, historically speaking. I did a gig a couple of months ago, and I was talking about politics and women’s rights and making jokes about it. I was on for an hour. And at the end of the show, people looked at me and said: ‘Oh we expected Jaques Vermeire (editor’s note: famous Flemish comedian), you didn’t make any faces.’

So, it’s a different kind of comedy then?

You’ve been living in Belgium since 1976. Are there still things that surprise you about Belgium?

Everyday. Because of the internet, we’re becoming a more global community. Everything is becoming the same: same hair, same glasses, same music. But there’s still some stuff in Flanders that I go: what, why are they doing this? For example, it takes longer here for people to start dancing. If you go to a gig here, in the beginning, people are just staring at the group. Whereas if you go to a gig in America or England, as soon as the singer starts, they go: yeah fucking hell!

‘You should never underestimate the health care you get here’

You’ve been living here for so long, what’s one thing you like about Belgium?

Health care. You should never underestimate what you get here. I even ordered pizza when I was in the hospital. How cool is that? We have a very good health care system in Belgium, and that needs to be protected. Especially now with the coronavirus. In the United Kingdom, it’s weird, it’s one of the most prominent societies, and they don’t know what they’re doing. Whereas in Belgium, and I’d never thought I’d say this, the majority of people are very disciplined at the moment. Belgians aren’t well known for their discipline. In England, when you wait for a bus, you cue up. In Belgium, they form a circle, and nobody knows who’s first or second. But now, people are pretty well-disciplined.

What’s something that irks you about Belgium?

Racism. I hate it. What’s the fucking deal? It’s okay to be racist here. You should never judge people on where they come from or how they look. When you’re born, you can’t help what color you are, right? If you’re a dick, or an asshole, or an idiot, you can change that. But you can’t change the color of your skin. So, if we just start judging people on who they are, that’ll make life easier.

How did you deal with that as an immigrant yourself?

I’m white, so it was quite easy. In the beginning, when I moved here I worked in the factory, and on Friday nights we went out for drinks. There was a place in the center of Mechelen for which you had to have a membership card to get in. So, I went to get my membership card, and the guy there said: ‘Oh no, you’re not Belgian, so you’re not allowed in.’ Also, to register in Mechelen, I had to get my fingerprint as well. That’s all changed now because of the EU laws. But that was a confrontation. And I thought to myself: I’m white, so what must it be like if you’re black?

What difference do you see between racism in the United Kingdom and Belgium?

Nobody dares to be openly racist in the United Kingdom because we have laws. But we have a moral law as well. Here in Antwerp, I was trying to help a Moroccan girl get on to a tram with her buggy. The tram stopped, the doors opened, and I got off to help her get on the tram. And the tram driver closed the door, went away, and flipped me off. He goes like this to me *shows middle finger*. If that was in England he’d be sacked. And people would react as well. But people here look the other way and don’t speak out. With the new generation, the internet is changing a lot. You can chat with someone in Africa or Australia right now as if they’re next door. That is amazing, that is cool. And I think that’s gonna change the world in a better way.