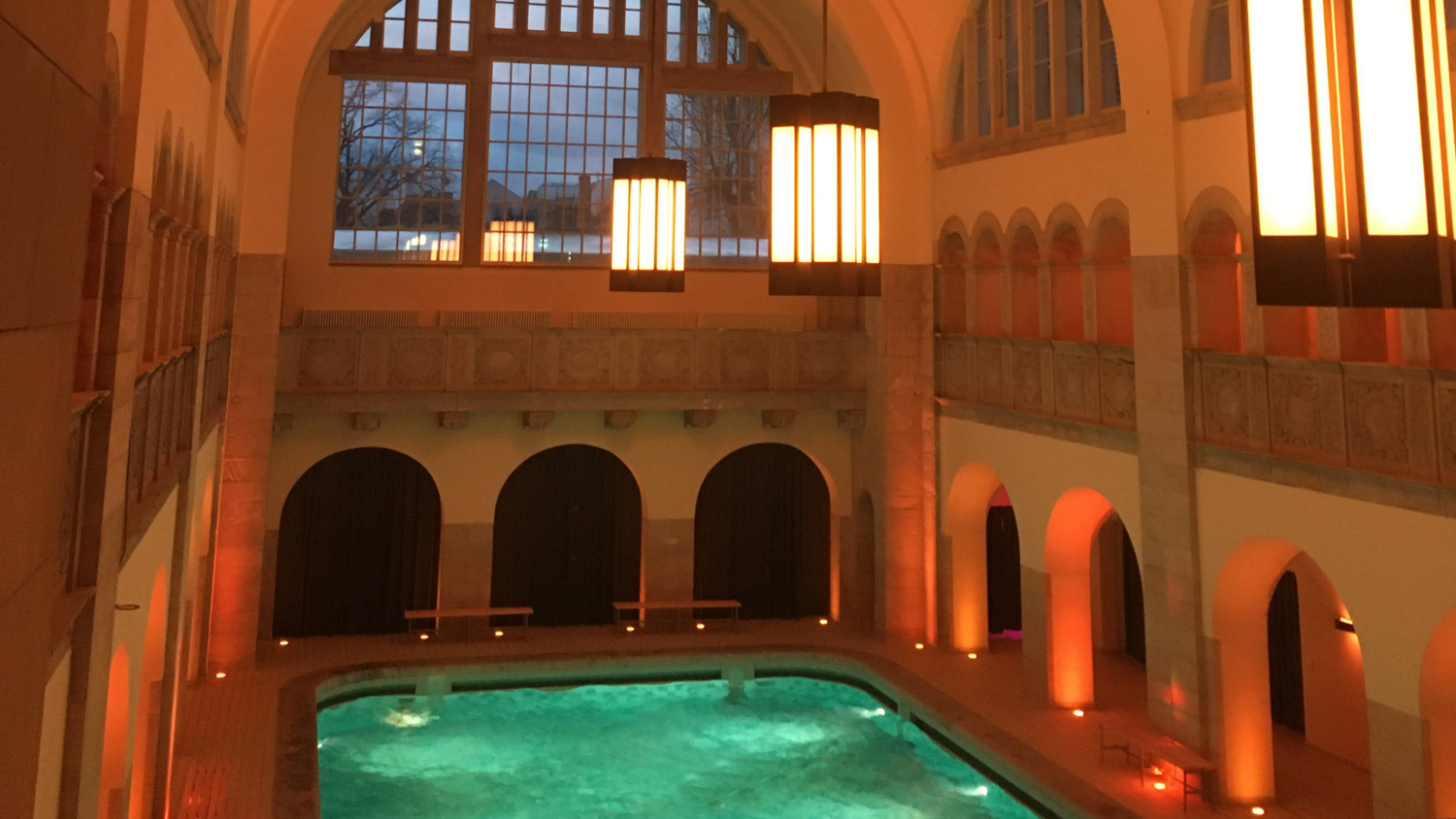 PRENZLAUERBERG – A public bathhouse, creative space, party venue, and a hotel. The Oderberger in the East-Berlin neighbourhood of Prenzlauerberg has quite an interesting history. But this hotel is not the only building with a story to tell. A few blocks down, a former brewery changed into a hostel, theatre and a restaurant. Pfefferberg complex offers multiple ways to unwind and relax.

The Oderberger hotel is a hidden gem within the north-east-Berlin neighbourhood of Prenzlauerberg. The building has a very colourful and fascinating history.

It opened in 1902 as Volksbadeanstalt, which roughly translates in a public bathhouse. It served as a social space for the local population. A place where they could go for a swim and a shower, since most of the houses in Berlin didn’t have their own showers and bathtubs.

In 1986 the bath was forcibly closed down because there were cracks in the pool basin. The East-Berlin city council lacked funding for the repairs and the building remained empty.

Shortly after it had closed down, the building was taken over by Berliners. They reopened it, but not as a pool since the basin still needed repairing. The Oderberger hosted art exhibitions, performances and ateliers but also parties. In 1989, after the fall of the Berlin Wall an official citizens initiative was founded to ensure the preservation of the historic site.

In 2011 the building was bought by the Jaeschke family who own the GLS language school. The family renovated the building and made it into a boutique hotel. The pool was refitted with a hydraulic floor which, when driven up, can transform the bath hall into an event location.

Not only hotel guests can use the pool, but it is also open for tourists and Berliners alike. By opening up the pool for the public, the Jaeschke family receives funding by the Berlin city council which they use for maintenance of the swimming pool.

Do you want to dive deeper into the story of the Oderberger? Hotel manager Verena Jaeschke is pleased to tell you more about it. Listen here:

A bit further down the road in the same neighbourhood lays the site of the former Pfefferberg brewery. The large building complex houses a hostel, art gallery, theatre and a beer garden in the summer. The bartender of the Pfefferbett hostel told us all about the history of the complex.

Pfefferberg served many different purposes during the past century. Joseph Pfeffer can be considered the founder of the complex. He started brewing his own beer in 1841 and founded the brewery on the hill. Schneider & Hillig took over the brewery in 1861. They brought in machinery and expanded the storage cellars. Their expansion continued and they built more separate buildings to store and sell the beer.

The brewery was abandoned for a few years, but got cleaned up again. After the First World War, its function changed completely. The brewery became a chocolate factory for a while. The Second World War brought a different purpose to the complex. Though plans to store military weapons were not realised, the storage cellars did get used as air attack shelters in the last few days of the war.

Fast forward to 1999. The Pfefferwerk foundation bought the Pfefferberg complex and made it into a hostel, restaurant, theatre and event location. Some parts of the buildings are available for pop-up stores or other temporary uses.

Pfefferberg originally started out as a brewery and has served a lot of repurposing projects. Even though its main purpose is not beer-making anymore, a small part of the brewery was restored and put back in use. Visitors can still enjoy a locally brewed beer in the bar. So we definitely had to taste it too.

Corona-update: Hotel Oderberger Berlin and the Pfefferberg complex will be closed until May 24th.

Planning on a city trip to Berlin after the lockdown? Don’t forget to visit the lively neighbourhood of Prenzlauerberg, and visit these hidden gems. https://uploads.knightlab.com/storymapjs/f93799ba7dbb2b1508a3f73361d74835/prenzlauerberg/index.html