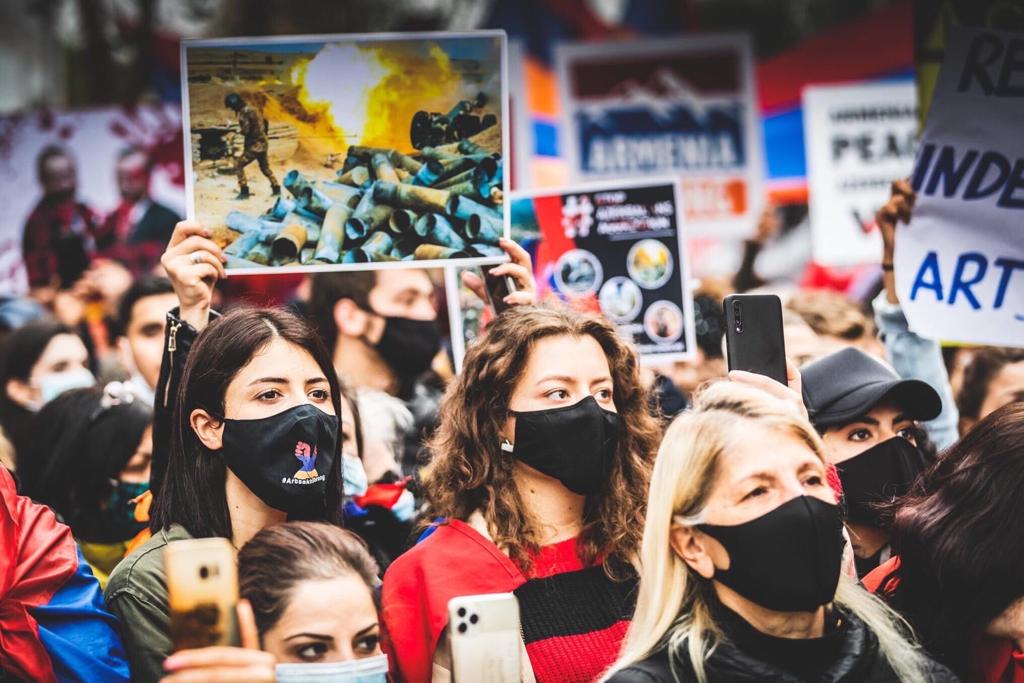 On Wednesday, the 7th of October, approximately 2 000 Armenians gathered in the centre of the European District in Brussels to protest against Azerbaijani aggression in the disputed region of Nagorno-Karabakh. Following this event, many news outlets like the Belgian newspaper Het Laatste Nieuws mainly focussed on the lack of masks and social distancing at the event, but at 21bis, we decided to give the Armenians a chance to voice their concerns instead.

The people gathered at 8 a.m. in the heart of the European Institutions wrapped in Armenian flags. The gathering was organised by the Armenian Community of Brussels, and was held at the same time that the European Parliament debated the Azerbajan-Armenian conflict. The protest was approved by the Brussels authorities, but much more people attended than initially anticipated. This led to an overcrowded Rue de la Loi which houses many EU Institutions and some revolts. The police even deployed the water cannons when the crowd wouldn’t disperse at the scheduled time and reportedly blocked a tunnel under Rue de la Loi, one of Brussels’ busiest streets..

These disturbances, combined with the lack of corona measures, caused the voices of the Armenians to be drowned out in the noise. Ani Karapetyan (34) is an Armenian woman who has lived in Belgium since 2011. She gave us her version of the events that expired that day.

According to her the manifestations weren’t just about the conflict in Nagorno-Karabakh, but rather about Turkey’s alleged involvement in the conflict. Especially since their President Recep Tayyip Erdoğan – an ally of Azerbaijan – allegedly wishes to expand its territory.

When our interviewer asked her how she felt about the media mainly focussing on the lack of masks, she aired her frustrations claiming that a lot of people were actually wearing the masks. ‘I even have some pictures.’ she added. She then proceeded to say that, ‘Even if we didn’t, more than 2 000 people gathered in the heart of Brussels, next to the parliament trying to get people’s attention, and all people get out of this is that we didn’t wear a mask.’

Although she is critical of the perception of the protest in the media, she remains hopeful that the European Union and NATO will take action before the conflict gets out of hand.