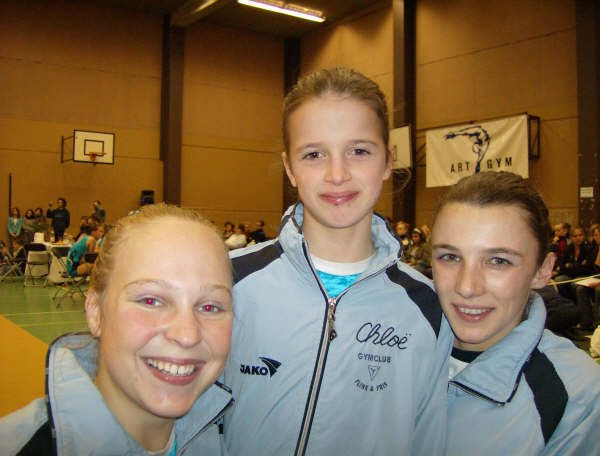 The Belgian helpline 1712 asks more attention to the abuse in the sports and culture sector. A couple of famous ex-athletes like Aagje Vanwalleghem, a former gymnast and Flemish actresses such as Marijke Pinoy and Anemone Valcke are trying to emphasise this problem. Chloë Demeulenaere (24) (in the middle of the picture as an 8-years-old kid), a former gymnast has had different mental issues and still feels the consequences. ‘As an energetic child, I was just sporting to amuse myself but the coaches kept on offending me during my training,’ says Chloë.

‘Once my trainer asked my mom if he could be angrier at me because I wasn’t paying much attention during training sessions. My mom didn’t know what this was all about but she agreed and so my trainer just dragged me the next training into the dressing room and shouted at me to work harder.’ Chloë was only 8-years-old when this happened and it affected her tremendously. Even now she has emotional issues and she’s afraid to disappoint people.
Not is she only emotionally hit, also her back problems caused her to stop gymnastics. She still feels the pain after being pushed to the limit every time and every training. ‘When I was 13 years old, I had a burn-out. I couldn’t function anymore because of the pressure during the training and the pressure of school. I was emotionally broken and I skipped one year of school. It took me quite a while before I was back on track and it even took me up until my 22nd birthday I could talk about this. Before that I had to have therapy and even had to stop working because of a second burn-out’, says Chloë.

Many actresses and former sporters claim now with the hashtag #dontlookaway (#kijknietweg) that there is no place for abuse in their sector because, over the last couple of years, the numbers have risen. According to the numbers of the helpline 1712, 17 percent of the Flemish sporters get in touch with sexual transgressive behaviour as a minor and no less than 82 percent was a victim of psychological transgressive behaviour.

The Belgian helpline 1712, gives some tips on how you can cooperate in this campaign. You can make a short film clip in which you turn your head and show that you don’t look away. Hang up the poster or change your profile picture on Facebook. More information is to be found on their website or if necessary there is the Community Help Service.