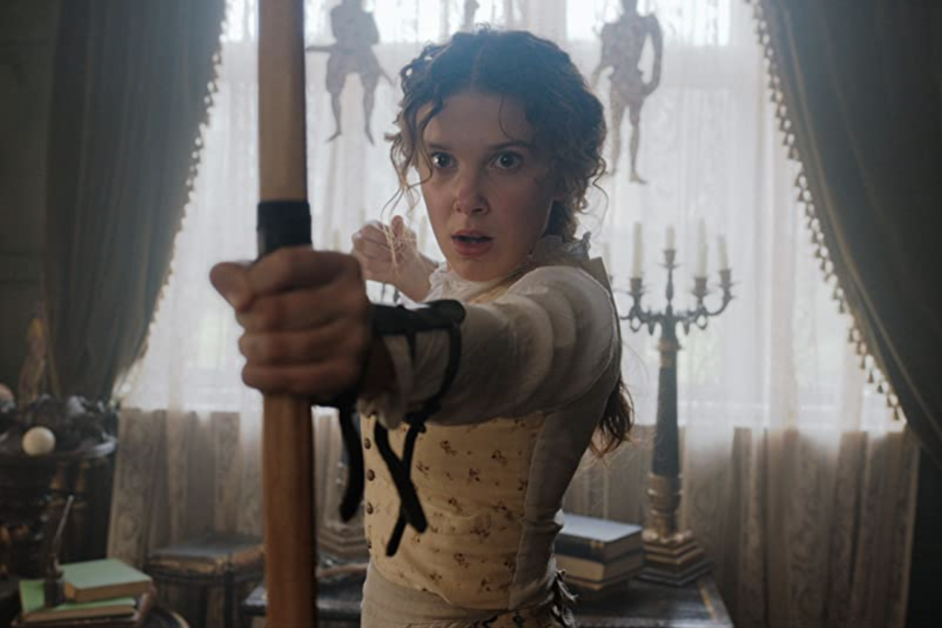 Life is pretty hectic right now, especially for students, so it’s the perfect time to unwind with Netflix’s newest movie Enola Holmes. The movie is based on the young adult book series The Enola Holmes Mysteries by Nancy Springer, who developed the character of Enola Holmes from the Sherlock Holmes universe.

Set in the 1800s, Enola Holmes details the tale of the 16-year-old sister of the famous detective Sherlock Holmes. Upon her 16th birthday, Enola realizes that her mother disappeared with no clue as to where she went. When her two older brothers Mycroft and Sherlock return home, it’s clear they care more about making sure Enola ends up as a suitable young lady ready to wed rather than looking for their missing mother. So Enola decides to set out into the world, looking for her mother.

Unhinged compass but compelling characters
The Holmes franchise has always gathered attention, and this film is no different. Add to that the stellar cast such as Millie Bobby Brown who also co-produces the movie (Stranger Things), Henry Cavill (The Witcher), and Sam Claflin (Me Before You), and you get a pretty compelling film before having even watched it. At first glance, it may seem like a film for kids, but due to its cast and the themes of the film, Enola Holmes secures a sense of maturity suited for an older audience as well.

Enola Holmes does miss the ball a few times. Mainly because of its lack of a main mystery that takes the forefront from the beginning, making it seem like an unhinged compass trying to find its north. It takes a while before the film finds its footing with a clear mission in mind. While that may seem like a film not worth watching, Enola Holmes draws its strength and vigour from its strongly established characters. Especially Enola Holmes herself is a treat to watch, played by the brilliant Millie Bobby Brown. She blossoms in the role of a 16-year-old girl too worldly for the Victorian era England she was born in.

Millie Bobby Brown
Most famously known for her role as Eleven in Stranger Things, Millie Bobby Brown truly shows her acting range with Enola Holmes and also steps up as a co-producer. Due to the style of filming, she is often seen breaking the fourth wall, giving the audience a glimpse into Enola’s mindset. This has Brown telling the audience her thoughts, which helps Enola become a multi-faceted character with her own power and free will. It becomes clear, quite quickly, that Enola possesses the same smarts that her older brother Sherlock has.

Enola Holmes is not perfect but has the bones to be an interesting, new Holmes franchise. The movie does a brilliant job of introducing the youngest Holmes sibling. However, in the end, you do end up with a sizzling hunger wanting to have the answers to the numerous questions still unanswered. Overall, Enola Holmes is compelling enough to warrant a sequel because it’s clear Enola Holmes’ story has only just begun.