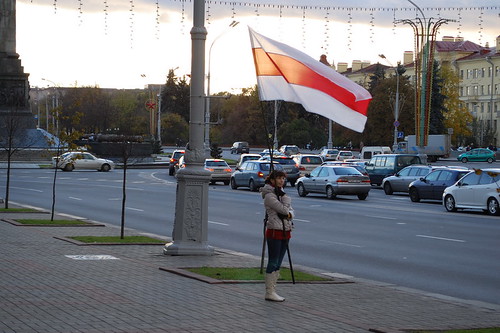 Protests in Belarus do not subside. On the 80th day, people continue to demand the resignation of the current president of the country. However, the ultimatum put forward by the opposition to Belarusian President Alexander Lukashenko may not come into force. ‘Any “dissent” in elite circles leads to the fact that a person is deleted from the list,’ – says Olga Loyko, editor-in-chief at TUT.BY. It is possible, that the general strike will not take place.

October 25, 2020, was the last day of the opposition’s ultimatum to the President of Belarus to resign or a general strike will take place. On that day, the protesters staged another demonstration in Minsk. They called on Lukashenko to resign his powers as President of the Republic. However, the protest movement was under constant pressure from the authorities. As a result, many leaders were detained while others fled abroad.

These circumstances have negatively affected the mood of the opposition. On the 80th day, the protests in the Republic are more taking the form of pinpoint meetings. The opposition has no leader, no strategy, and no ideology. There are more and more of those who are inclined to end the unrest in the country, regardless of who the next president will be. The Belarusian newspaper Nasha Niva reports, that in Chizhovka (a district in Minsk) a driver hit a person, who was standing with a white-red-white flag. In the center of Minsk, an unknown person, standing on the roof, tried to remove the white-red-white flag from the balcony. He chose an unusual method, trying to catch the flag with a fishing rod. For observers, today’s events are more taking a comical turn.

Belarusian opposition ‘would like to decide on the ideology later, electing the president in free elections,’ says Olga Loyko, editor-in-chief of the political and economic news block at TUT.BY. ‘So far, representatives of different ideologies can find themselves together and the protesters did not split.’

However, a general spirit of rebellion may not be enough to win. Especially when the authorities stand on the opposite side. The Belarusian Prime Minister Roman Golovchenko speaks about the calls for a strike: ‘These are direct calls to harm our country and the people who live and work here. After all, the call to stop the enterprise is nothing more than clearing a place for our competitors.’

The existing political elite fully supports the incumbent President of the Republic Alexander Lukashenko. ‘We have a more loyal, more monolithic elite. Any “dissent” in elite circles leads to the fact that a person is “deleted from the list”. We cannot have a situation when the mayor of Minsk supports the protesters. This is simply not possible. These are all positions appointed by the president. Therefore, there are only loyal people. Any disloyalty is an immediate resignation,’ says Olga Loyko.

It is difficult to imagine that in such conditions the struggle is in favor of the opposition. Power has a clear advantage. Moreover, if the opposition does not decide in time on the leader, tactics, and ideology, then the country’s political course, unfortunately for the opposition, may return to dictatorship.