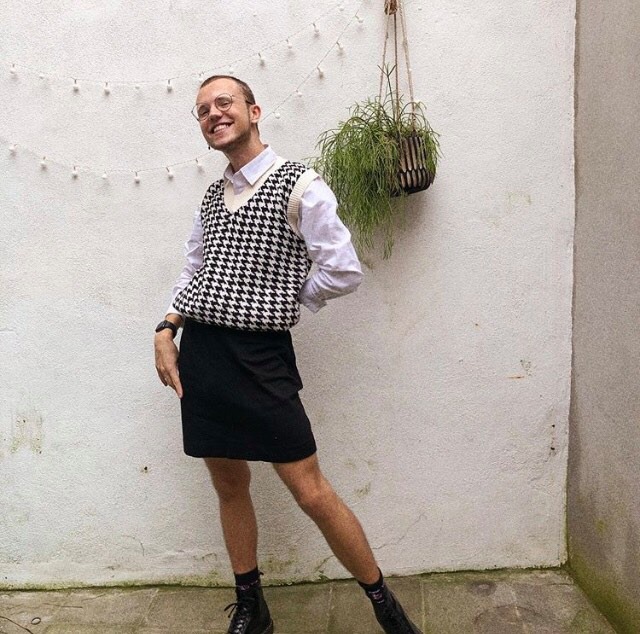 Girls and boys went to school with a skirt on the 22nd of October in Belgium, as a statement that they don’t agree with the dress code at their schools. Victor (16), Flemish primary school student, started this protest, ‘a skirt isn’t exclusively for girls, and pants aren’t exclusively for boys,’ says Victor. Girls and boys from middle and high school wore a skirt to school this Thursday, joined by higher education students using the hashtag #wewearskirts to post pictures of their skirts online. The same protest in Quebec, Canada already reached the news on the 14th of October in Belgium.

Not only did students go to school with a skirt against discrimination, the hashtag #draageenrokje (wear a skirt) was used on social media as well, with a picture from girls and boys, even older ones, in skirts. Victor is convinced that there are still too many stereotypes. ‘We do this because we feel that too many people live in boxes.’

Even though most classes are currently held online at Belgian universities, those students saw an opportunity to join the movement, and posted photos in skirts on their social media accounts with the hashtag #wewearskirts . Simon (18), primary teacher student, gladly participated. ‘It’s mostly about stereotypes and toxic masculinity,’ he says, ‘It’s stupid that society expects us to meet the male standards that are being imposed on us.’

‘I was late with posting my picture on Instagram and Twitter, but I’m still glad I did it.’ After posting the picture, Simon received negative comments on his picture on Twitter, ‘Those reactions are proof that the situation is worse than people might think.’ He is convinced that everyone should wear whatever they want. ‘It’s just a skirt, l honestly don’t know how people can feel offended by that.