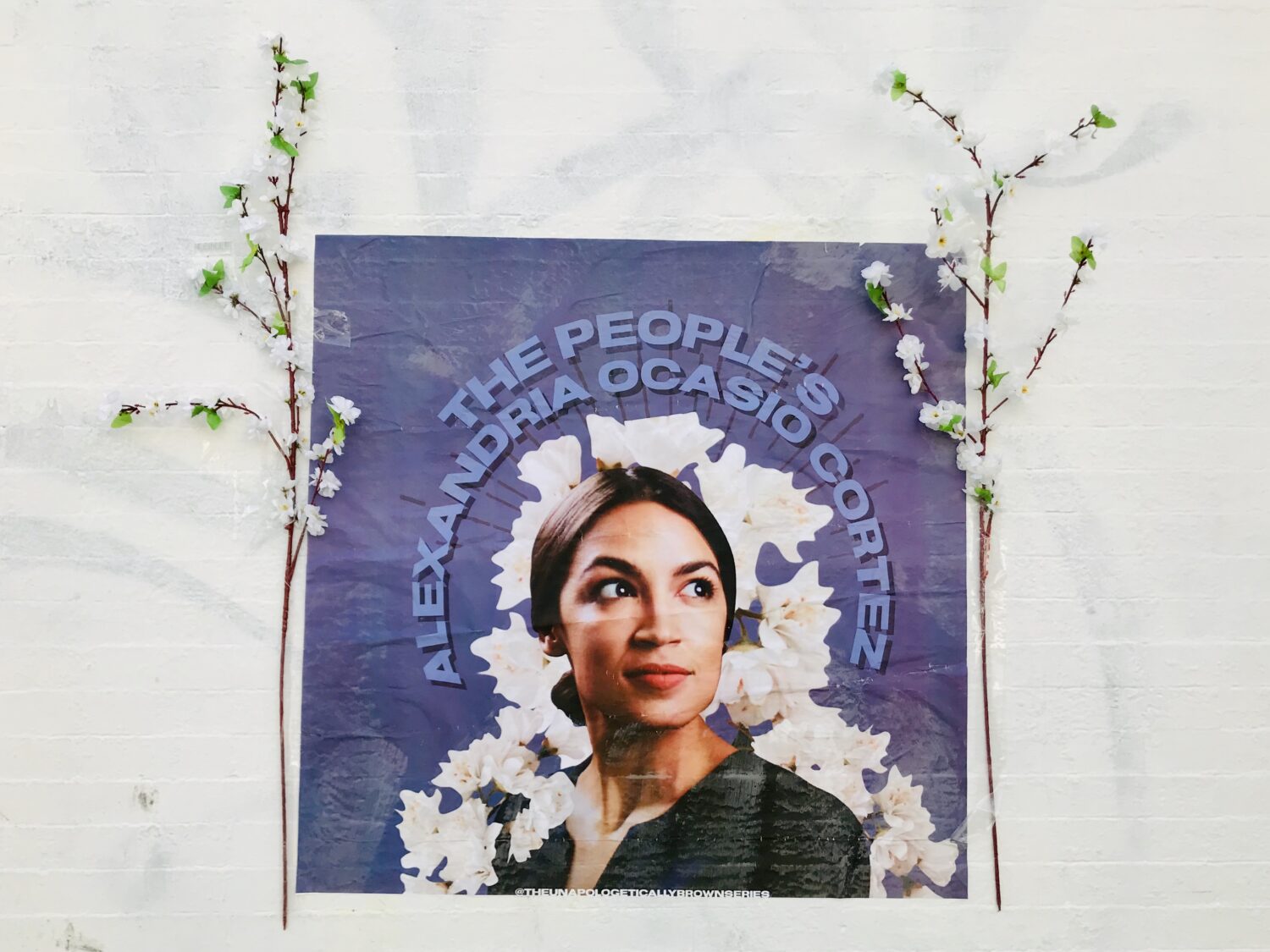 Many people heard Alexandria Ocasio-Cortez speak those words during her speech on the floor of the House of Representatives this July. In that speech she responded to congressman Ted Yoho calling her a ‘fucking bitch’.
But who actually is this young and fierce, American politician behind those strong words?

A local politician with a very strong message about inequality, climate change and more things that have been festering in society for a long time. Democrat Ocasio-Cortez showed up in American media when she won the midterm elections in 2018. She became the youngest congresswoman ever in the United States House of Representatives at the age of 29.

‘AOC caused a lot of fuss at the time of the midterm elections. The congressional district where she ran was in the hands of Joseph Crowley, someone very high up in the Democratic Party. Crowley had had that seat for 20 years. He thought he would get re-elected again, because many people don’t bother to vote in midterm elections. But AOC appeared and she thought maybe it’s time for something different, something new, more attention for the people who live in the 14th district’, says America correspondent Björn Soenens. After crushing Crowley, she was going to win those elections, because there are very few Republicans in the New York district of Queens and the Bronx.

This is the start of a movement.

Soenens explains: ‘She immediately got national attention, because she stood up in a district where that white man, Crowley, had been in charge for a long time and thought he was going to make a big career. It was a major upset for the establishment of the party. She immediately had a voice.’

Representative Ocasio-Cortez became quite the hype in the whole world. All kinds of talk shows had her as a guest and her network started expanding extremely quickly.

Part of her networking is being member of ‘The Squad’, a group of four progressive Democrats that were all elected to Congress during the 2018 midterm elections. Alexandria Ocasio-Cortez, Ilhan Omar, Ayanna Pressley and Rashida Tlaib, all four squad members are women of color under the age of 50.

👯‍♀️When your sisterhood is so powerful the President of the United States can’t stop thinking about it 👯‍♀️ 😉 . 📸: @kidnoble

Soenens: ‘She did not allow herself to be silenced once she got to the House. She stood out because of her collaboration with the so-called squad who put women’s rights more on the agenda.’

Members of The Squad are actually just local politicians, but because of their strong point of view and loud voices they have caught President Trump’s attention.

In a tweet, the president tells the four congresswomen to ‘go back to where they came from.’ Ironically only Ilhan Omar was born outside the US. The other three women were born and raised in America. AOC reminded the president of that by tweeting back: ‘Mr. President, the country I “come from,” & the country we all swear to, is the United States.’

Speaker of the House and Democrat Nancy Pelosi saw it as a great opportunity to defend her representatives and criticize President Trump. Pelosi responded in a tweet: ‘When @realDonaldTrump tells four American Congresswomen to go back to their countries, he reaffirms his plan to “Make America Great Again” has always been about making America white again. Our diversity is our strength and our unity is our power.’

Two years ago, Ocasio-Cortez was still waiting tables and bartending to support herself and her family after her dad passed away in 2008. She comes from a working-class family and is still paying off her student loans.

During a congressional hearing on student loans in 2019, Congresswoman Ocasio-Cortez talked about her own student loan payment to get her point across.

During the Covid-19 pandemic, AOC’s fight against student loans has only gotten stronger. She, together with other House Democrats, advocate for a pause or cancellation of student debt. The Student Debt Emergency Relief Act was introduced by Rep. Ilhan Omar in the House in March of 2020. The bill has been referred to the Committee on Education and Labor and still has to be approved or rejected.

‘The perfect storm of the right candidate, a catchy message, the right zeitgeist and the right media platforms to spread it on.’ Soenens points out a few of the factors that helped Ocasio-Cortez get world attention.

Soenens knows how the media and news industry works. ‘The media is always looking for heroes and the flavor of the day. Her appearance, her way of speaking, very passionate, fiery and using social media. That’s how it’s picked up by the media and by others. That’s how you get launched. Suddenly you go viral. We are living in the internet age. You get hyped and the internet knows no boundaries. It goes around the world,’ explains Björn Soenens.

With 7.4 million followers on Instagram and 9.4 million on Twitter, Ocasio-Cortez really knows how to reach the younger generations. AOC has made her name and fame on those platforms. The fact that she looks good might help too according to Soenens. He says: ‘She has some kind of political sexiness. There’s no denying that. If she were an old, wrinkled woman with black glasses and hippy type sweaters her notability might be different.’

Congresswoman Ocasio-Cortez’s two years in the House are almost over. She will need to be re-elected on November 3rd. However, she does not need to worry, because the vast majority of her district is Democrat. Winning the primary elections was more challenging. Soenens explains: ‘They tried to thwart her by sending a lot of candidates to her in the primaries, but she made it anyway. She is seen as a thorn in the flesh always claiming that they are too soft on certain subjects.’

In 2018, people already asked ‘Why can’t she run for president?’ She was too young. A candidate needs to be at least 35 to become president of the United States.

AOC turns 35 in 2024, which makes her eligible to become president.

‘Suppose Biden becomes president, maybe she’ll get a bigger role in Congress. It will depend on her too. Will she decide to stay that thorn in the flesh and remain independent and go completely for her idealistic vision of life which would be admirable, or does she remove the sharp edges as she gets older and picks the more realistic side,’ tells Soenens.

What we do know now is that Alexandria Ocasio-Cortez will keep fighting for The Green New Deal – the big climate plan to make a switch from fossil to alternative energy – Medicare for All and speaking up for the people she represents.