You probably heard of it: non-binary identities, identities that aren’t exclusively male or female. But have you ever met someone who is non-binary? Time to meet Mars, Luna and Olivier, three non-binary students from Flanders, who share their process of becoming non-binary, their feelings around the gender-neutral pronouns, and their opinion on how the media looks at gender identity.

Mars, 24 and a student primary school education, founded ‘Genderspectrum Antwerpen’ with two other friends. Mars uses the pronouns they/them and he/him. They have already obtained a degree in gender & diversity, in which they met people who are also non-binary. Mars wrote their thesis about non-binary identities.

Mars: ‘In Genderspectrum Antwerpen, we offer a safe space for non-binary -, queer -, and trans people. The organization has done two real-life events, since they only started in February 2020.’ Fortunately, the organization opened a discord server called ‘queer kot’ (queer house) during the first lockdown. This is a platform that looks like a forum and a chatroom, to find other people from the LGBTQ+ community. It is used to talk about different themes, as well as sending memes or just chat about daily life. 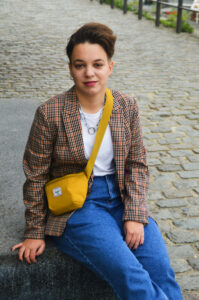 ‘When I was younger, I always had a fascination for non-binary people’

Mars dealt with a lot of questions before they could fully say that they were non-binary. ‘When I was younger, I always had a fascination for non-binary people. It might sound weird, but they attracted me for some sort of reason.’ Mars started looking up more about non-binary identities and started questioning themselves. Questions like: ‘what does it mean to be a woman?’ and: ‘am I a woman?’ became their daily dose of self-reflection and an important part of discovering their identity.

‘I am happy as long as people don’t use the pronouns she and her. That’s simply because I don’t associate myself with the characteristics of a woman.’ When Mars realized this, the obvious result was to use the pronouns they and them. They were still a bit scared to use the male pronouns, but after a while, this felt comfortable, ‘I really feel heard and more like myself when others use they/them and he/him.’

‘I don’t always find the energy to correct people when they keep using she and her. I know that I have good people around me who respect my pronouns, and that is an important foundation for me.’ Mars had to  stand their ground since some people refuse to use the correct pronouns. ‘I have broken off friendships because of people not respecting that.’

Mars thinks that it should become usual to ask someone’s pronouns, ‘this should become a habit in all spaces since it’s currently a normal thing to do in queer spaces only. This makes non-binary people even more vulnerable,’ according to Mars.

Luna, 19 years old and a language & literature student, has considered themselves non-binary for a few months. They use the pronouns she/her and they/them. For Luna, the pronouns they and them mean getting freed from the gender identity that is imposed on them.

‘When I was still a child, I always asked myself questions like: ‘wouldn’t I rather be a boy?’ Or: ‘Do I really feel like a girl?’ When Luna was fifteen, they met someone who was non-binary. That was also the moment they first discovered the identity. They then realized that there would be a possibility that they could be non-binary themselves. ‘After a while, I started using the pronouns they and them. This felt very comfortable, and was also the moment I knew: I am non-binary!’ 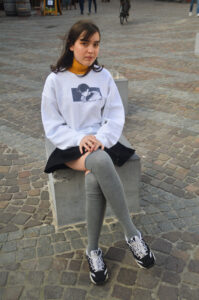 ‘They and them is just that extra bit for me’

‘My friends were very open about the gender-neutral pronouns. They had to get used to it in the beginning, since I was the only non-binary person that they knew.’ Luna feels accepted and appreciated when others use both the pronouns she/her and they/them, ‘but this takes time’, according to them, ‘I’m not going to start a scene when people only use she and her. They and them is just that extra bit for me.’

Luna is convinced that it would be a good idea that kids from kindergarten and primary school get educated about non-binary identities. ‘People will say it’s going to be forced on kids. That is stupid because I also got taught the differences between girls and boys from a very young age.’ Luna doesn’t see any difference, ‘people only see a difference because these new identities are not what they are used to.’

‘We have a distorted image of gender’

According to Luna, it’s quite hard to meet other people that are non-binary, since there are no physical characteristics attached to this gender identity. ‘That is the essence, we have a distorted image of gender. When we think about a man, we immediately have a picture in our mind of how he could look like. The same thing goes for genderqueer people, that should change’.

Olivier (21) and a student remedial educationalist, is transgender and non-binary. They use the pronouns he/him and they/them. Discovering that they were non-binary was a true relief for Olivier: ‘it felt like all the pieces of the puzzle finally came together.’

Olivier was never interested in ‘girly’ things like Barbie dolls or pink clothes. When puberty arrived, they realized that there was something wrong and that they didn’t feel at home in their own body. Olivier was fifteen when they saw a transgender man on the internet: ‘I then realized that that was something I could be. I took a clearer look at transgender identities and discovered: oh, I am a trans man.’ 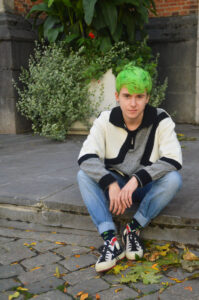 ‘It was only a year ago that I came out as non-binary, even though I realized I already was when I was fifteen, but I was deeply insecure about that word back then. That’s also because society perceives non-binary identities as weird and unusual. ’ Olivier only felt ‘safe enough’ to dig deeper in non-binary identities when they were 20, ‘I can now say that I feel completely at home in the label ‘non-binary’. I am also more tolerant of the ‘feminine’ things I hated so much before, just because I don’t necessarily associate female things with feminity.’

There is still a lot of confusion around non-binary identities and gender-neutral pronouns. Olivier: ‘I talked about they/them pronouns at school at some point. My classmates thought it was very usual, but the teacher didn’t understand it. She said that you can’t use ‘them’ to talk about one person, since that is plural. I tried to educate her on this and tell her that the USA has been using these pronouns for years, and that we’re slowly adapting it. I thought she would understand it then, but after an hour, she continued her class with ‘ladies and gentlemen…’. That was very disappointing.’

According to Olivier, there should be more education on gender-neutral pronouns: ‘there is such a big opportunity to talk about pronouns, and how to use them, in primary schools. Right now, the internet is the only source that will provide the correct information.’