Every 73 seconds, an American is sexually assaulted. That’s an average of 71.000 times a day, which makes sexual violence a huge problem in the United States of America. According to the World Population Review, the country is ranked on place 14 on a list of most reported rapes, just behind Belgium. Time to look at the difference and similarities across the transatlantic ocean.

First, we need to understand the difference between sexual harassment, sexual assault and rape. According to The Conversation, sexual harassment is the broadest term and includes sexual coercion, unwanted sexual attention, sexual assault and rape. Sexual assault includes rape as well, but it can also include: unwanted touching, kissing, rubbing, groping, or forcing the victim to touch the perpetrator in sexual ways. Lastly, rape means penetration of the vagina, anus, or mouth. It is important to keep in mind that all these acts are non-consensual.

In Belgium, an average of 10 rape reports are made every day, but the dark number for sexual assault is high: 90 percent of men and women who are raped never reports the incident. According to Knack, a Belgian weekly news Magazine, rape cases have been increased by 25 percent last year: in 2010, 3.757 rape victims went to the police to report, compared to 4.664 rape victims in 2019. Half of these reports are made by an underage victim.

Younger people are at higher risk for sexual violence

RAINN found that 21% of transgender, genderqueer, and nonconforming college students have been sexually assaulted, compared to 18% of non-TGQN women, and 4% of non-TGQN men. These are the statistics for college students, but VAWnet, a gender based violence resource, found that 47% of their transgender respondents were sexually assaulted somewhere in their life, according to the 2015 U.S. Transgender Survey.

In Belgium, 31,7% of transgender persons has experienced sexual assault somewhere in their life, according to a 2015 study from Research gate.

RAINN found that for American teen and child victims, the amount is even higher: 93% of young victims know the perpetrator. 59% were acquaintances and 34% of perpetrators were family members or members of the household. The source also teaches us 1 out of 3 of the perpetrators known by an adult victim are current or former spouses or partners. Looking at the age of perpetrators, we see that half of them are over 30 years old, and that 1 out of 4 is between 21 and 29 years old. 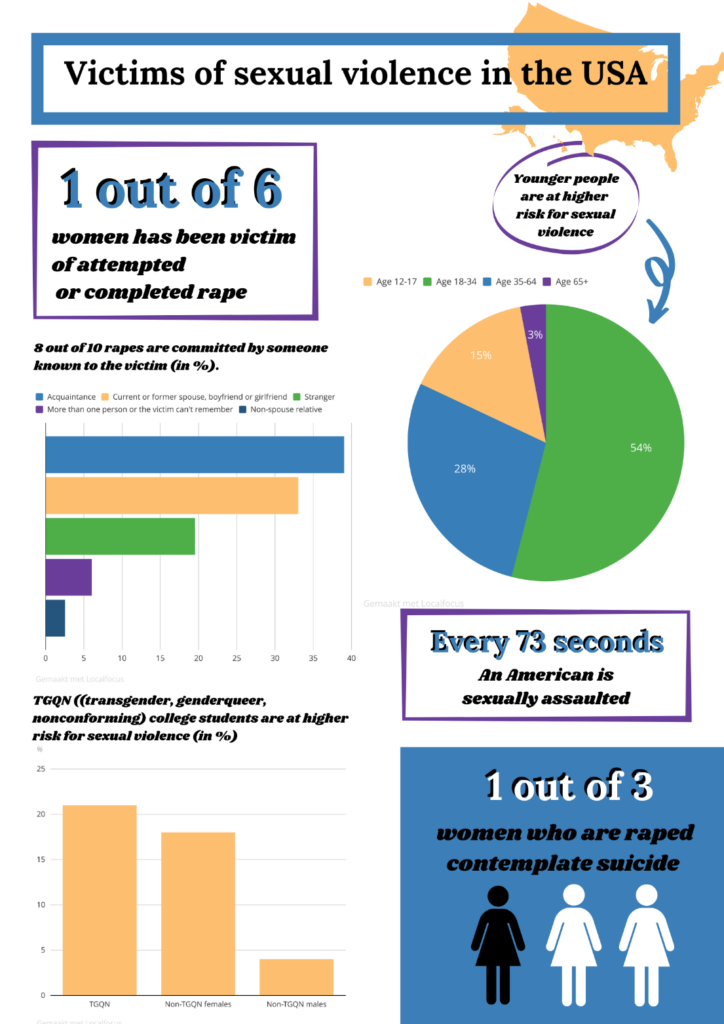