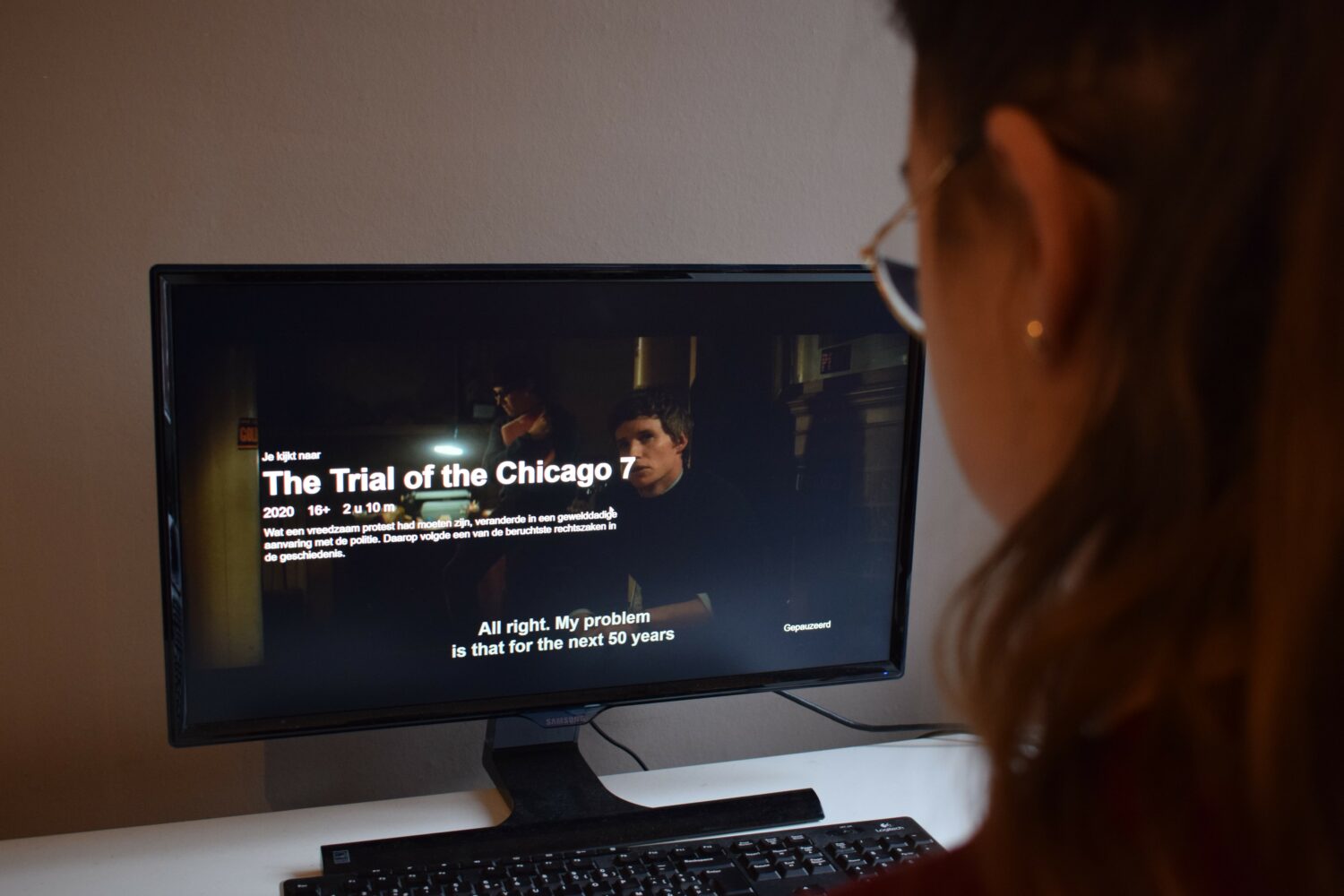 The Netflix film ‘The Trial of the Chicago 7’ is based on a true story in which seven young men are suspected and accused of inciting riots during the 1968 Democratic Convention in Chicago. Director Aaron Sorkin cast actors like Eddie Redmayne, Sacha Baron Cohen and Jeremy Strong. A good choice because they put down a wonderful performance with even some humoristic scenes. The movie of two hours reminds us of why freedom of speech is still one of the main human rights in the world.

The citizens of the United States have been divided over the last couple of years, as the ongoing presidential elections of 2020 show us. If you look at racism in the United States, demonstrations of the Ku Klux Klan in Charlottesville and a president who was spreading lies and increased polarisation. The situation was much more different in 1968 because of the ongoing Vietnam War and the many protests in the American streets. The year when Martin Luther King was shot in front of his house, followed by Robert F. Kennedy, shot at the Ambassador Hotel in Los Angeles. In that atmosphere, seven young men, some of them as activists, were suspected of inciting riots during the Democratic Convention in Chicago in 1968. Abbie Hoffman (Sasha Baron Cohen), Jerry Rubin (Jeremy Strong), David Dellinger, Tom Hayden (Eddie Redmayne), Rennie Davis, John Froines and Lee Weiner asked to protest peacefully, during the Convention, against the Vietnam war policy of Lyndon B. Johnson. Their permission was refused but still, they protested but those peaceful protests eventually ended up in riots with the police, using tear gas and batons on the marchers.

Those seven guys were arrested by the police and put into court, suspected of being the leaders of the protests and the ones who started the riots. Actually, the police started the riots, which you don’t see in the beginning, but as the film moves along you see how the American state is trying to cover itself for not being guilty during the protests. Not only the American state tries to cover the incident but judge Julius Hoffman, played by Frank Langella, is trying with everything in his power to lock those seven men up. His conservative way of thinking makes you angry and sometimes furious about how American justice worked. It makes you want to stop the film but before you reach that point of anger, watch until the end. It is worth it because it becomes clear again that the problems of today are the same as the ones we faced in the past such as racism, discrimination, and injustice.

The trial about a conspiracy against the state lasted for over half a year. It is already clear in the first 10 minutes of the film that those seven suspects were innocent. Actually, there were eight suspects because Bobby Seal is also one of them. He is a black member of the Black Panthers, a community that fights for equal rights for black people, and is also seen as a suspect during those riots. You would think that those 7 men would have an equal voice or that they could explain what happened but neither of that is true. Seal is dragged out of the court to a room where he gets beaten by the police. He had no lawyer and didn’t get an equal process. In those scenes, you start questioning why American black people don’t deserve the same rights as white people. Black Lives Matter has double meaning throughout the film. Besides that, policemen even tie him up on his chair and even silence him with tape. The other seven, assisted by a lawyer, don’t even have the chance to speak for themselves, only until one of the last scenes of the film which makes you speechless. Sorkin creates a sixties atmosphere with the way the characters are presented. The music drags you totally into the film to feel the carelessness and the anger people were sometimes living in.

As they gather around in their ‘Conspiracy Office’, referring to the so-called conspiracies against the state, Hayden is concerned that they could end up in jail for 10 years while Hoffman finds that this political process should not be about them. At first, the bloody riots weren’t seen as a political trial but as the film goes along, it becomes more and more clear that the state just wants to show how powerful they are and that there is no place for freedom of speech. Not even in a peaceful way.

With this film, the director Aaron Sorkin succeeds in giving us history class but also confronts us with the fact that we didn’t learn anything from history. The Trail of the Chicago 7 is a court drama where there is no place for emotive souls. There are a lot of parallels between the current Black Lives Matter protests and what can still change in the land of stars and stripes. It shows the hard reality of how black people are still treated the same way and how injustice can make you so furious. One thing is sure, this trial is one the most known in American history and could be working as a mirror towards the new American president to show how it must not be done.