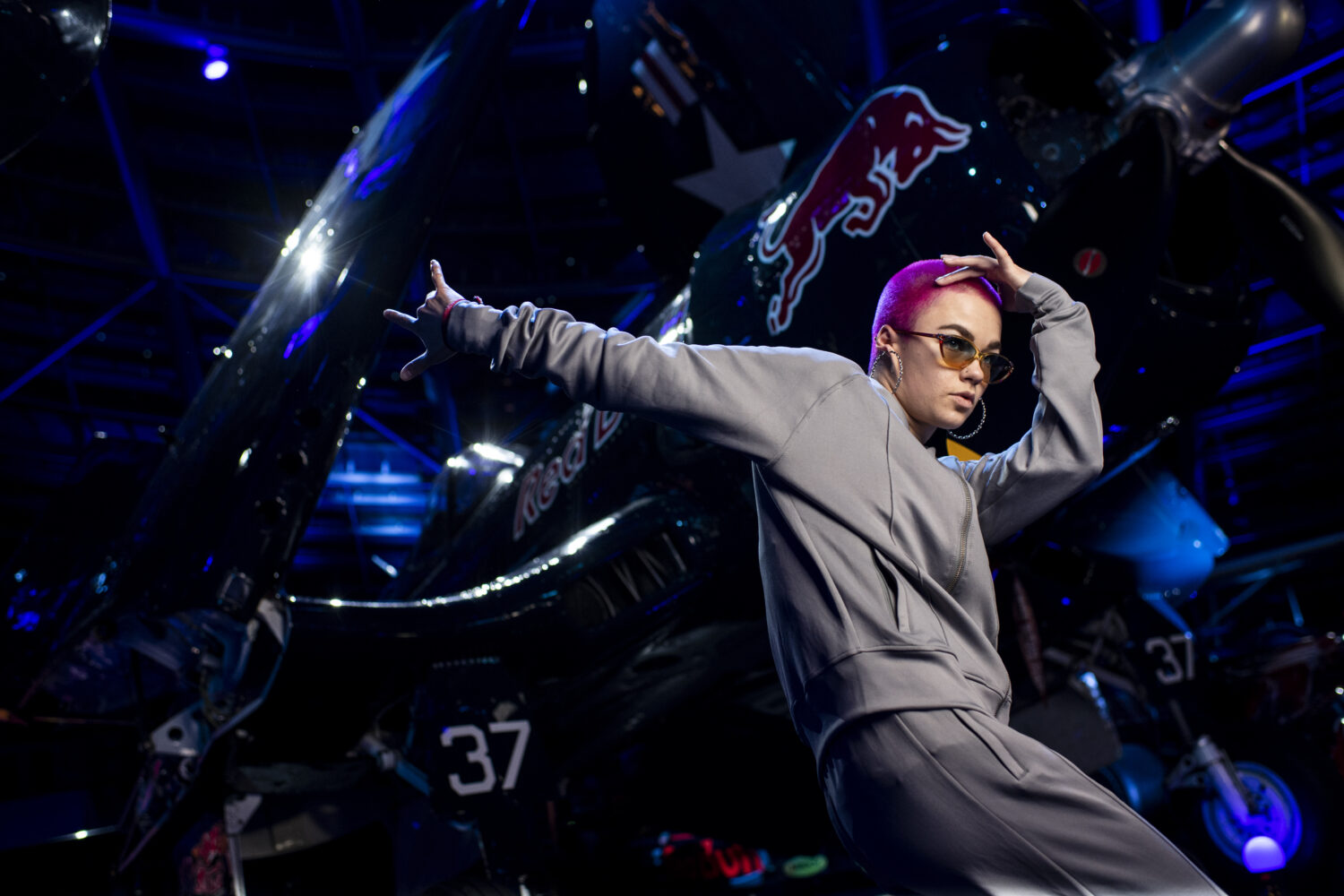 The breaking scene lies at the feet of Maxime Blieck (22). As a breaker, she is known as Madmax and finished second at the Red Bull BC One World Final in Salzburg, Austria. She has just been offered a contract with Sport Vlaanderen so she can call herself a professional athlete now. Besides that, she will be competing to go to the Olympic Games in Paris in 2024. The Bruges B-girl doesn’t avoid a challenge and wants to be the best at everything. ‘Train like an athlete, dance like an artist. I will work hard to make my Belgium proud at the Olympics of 2024.’

About a month ago there was the Red Bull BC One World Final in Salzburg, Austria. How was your experience?
I was the first Belgian ever to make it to the highest podium. It is the most prestigious and biggest one-on-one competition in the world but it is not an official breaking tournament because Red Bull, as a commercial company, is not allowed to organise such tournaments. The World Final is actually there to see who has a chance of going to the Olympics. The BC One was a huge experience in the end. Because of COVID-19, we had to go into quarantine for three weeks. You had the choice to stay in quarantine for three weeks, two weeks or just one week but I wanted to be well prepared and decided to leave three weeks before the start of the tournament.

I can imagine that it’s difficult to handle the stress when you’re in your hotel room.

Yes, there were strict rules, training rooms were available, we also had a little garden but we were only allowed to go out for one or two hours. That is annoying when you are awake for 16 hours. We were also not allowed to have contact with other people or dancers and if we wanted to talk we could do that for only 10 minutes. Of course, the organisation wants its dancers to stay healthy but I did not expect I was going to have so much stress. Most people saw it as an honour to be there. Me too of course but I really wanted to win that World Final. Because I won the BC One E-battle earlier this year, I can take my chance again next year. Then I will go for that first place.

You already started breaking from a young age?

Not really, I came into contact with breaking when I was 14-years-old. I used to skate a lot but I often saw breakers in the station of Bruges. That appealed to me and I had the tendency to go and talk with one of them but I did not dare to. When I was walking through the centre of Bruges together with a friend, he showed me a friend of his who was breaking in the city centre. The boy who was breaking was called Julien and was in my secondary school. I tapped his shoulder during the lunch break and he suggested teaching me how to break in the station if I wanted to. I went with him and that’s how the ball started to roll. Then I enrolled at the Bruges dance school, Rose De Leyn and when I was 16 I left for Ghent to join a dance crew.

(continue reading below the picture)

And then you moved to Brussels.
Brussels was just a metropolis to me, you get to know the breaking scene in a completely different way. There were also more facilities for training and I wanted to study there as well. At the end that was the perfect combo. The multiculturalism in the capital was also a big advantage. I felt a big difference between Bruges and Ghent where I missed that. You get to know other people, other nationalities and that just makes you stronger and better as a person. Although I sometimes miss Bruges and Ghent, I still think I will stay in Brussels for a while.

As a breaker, you are supposed to have an artistic name. Why did you choose Madmax?

You should get a name, you do not choose it. My name used to be Maxime but at one point I got in touch with someone from Nantes, France and he gave me the name Madmax. It has nothing to do with the film. It just fits perfectly with my style of dancing.

‘I want to show that I belong to the world top’

So there are not enough training facilities in Bruges because you moved to Brussels?
Now I can train indoors for free in Bruges, but I used to have to rent a room with friends. A few dance schools do pay attention to breaking but there is little improvement to be seen in West Flanders (the province where Bruges is situated). There are no locations at all. Maybe I would like to take care of that myself later on, but at the moment there is no future perspective to build more facilities in Bruges.

You won a silver medal in Salzburg. Did that open the right door for your professional contract at Sport Vlaanderen?

More or less. That medal did, of course, show that I have a great deal of potential and a chance of going to those Olympic Games in Paris in 2024. Sport Vlaanderen did tell me that their decision had already been made earlier. Last year I finished seventh in the Breaking for Gold tournament in China. The rule in Belgium is that you have to be among the eight best in the world to be offered a contract with Sport Vlaanderen. I also showed that I belong to that world top and that is why I was offered to become a top athlete.

(continue reading below the picture)

Never avoid a challenge.
No, and I have had that mindset since I was a student. In secondary school, I was anything but a motivated student (laughs), but I finished my studies at the university without retaking exams. I learned to work hard for my sport and so I also learned to work hard for other things. It was my goal to get a degree. I really wanted to excel in both. By setting those priorities, I could of course go out less or make fewer appointments with friends, but it was all worth it. If I go for something, I go for it 100%. The summer holidays were one of the busiest periods for breaking and I did not want to think about retaking exams.

To achieve your goal, you have to work hard. How does one of your training days look like?

For example, when I stayed in the top sports centre of Ghent to prepare for the World Final of the Red Bull BC One, my days were almost always the same. I got up at 7.30 a.m. Then I went for a walk and had breakfast. After the digestion, I trained for three hours in the training hall and after that, there was a lunch break. Then I trained for a full afternoon and had dinner. In the evening I trained again for a few more hours. It may have seemed like a lot but I felt the need to exercise. The more I trained, the more endorphins I had and the urge to stand in that training hall. I am someone who has a lot of energy so I guess that has something to do with it.

Can you make a living from it?
Now I can. Since I have a professional contract, I have been able to do so. Breaking is now seen as an Olympic sport and that is why the possibility came up to offer me a contract. I also have a contract with Red Bull Belgium as Red Bull Ambassador. I train like an athlete but dance like an artist. I’m not going to choose between those two.

Speaking about the Olympics. How will you prepare yourself for the Olympic Games in Paris in 2024?

Set my own goals, make training schedules and see what the influence of COVID-19 will be. A good relationship with your coach and your federation is really important in this respect. You have to be honest about your weaknesses to improve them. Above all, I have to listen to my body. This year I am going to rebuild up to be there at important tournaments. It is not yet certain that I will be selected to go to Paris. A lot can happen in four years but I will do everything I can to make Belgium proud in 2024.