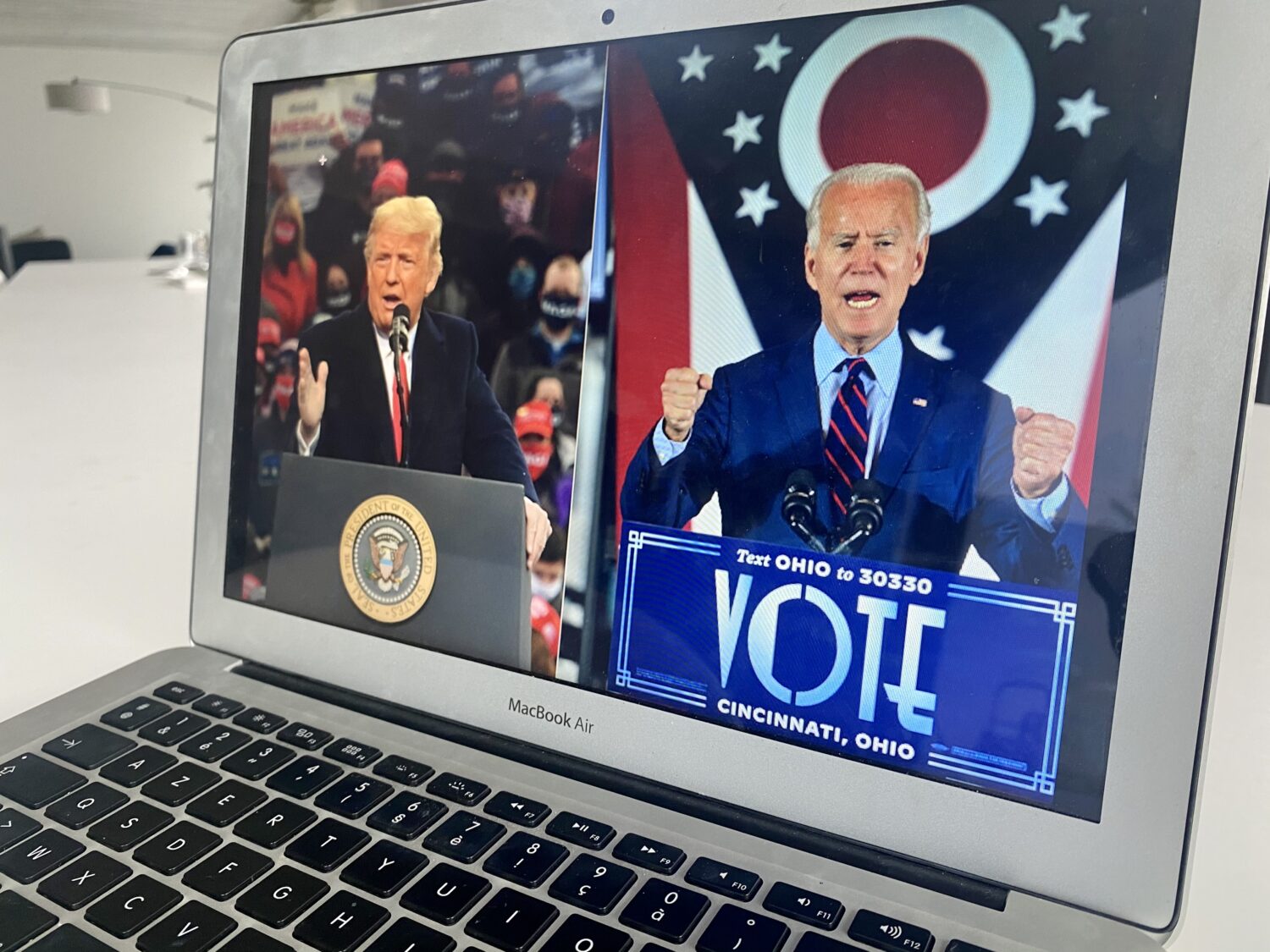 The new year is here and we are more than ready to leave 2020 behind and look forward to what’s ahead of us. The US elections have been one of the hot topics over the past year. Never before were there so many Americans who went to vote for the 46th President of the United States. The Black Lives Matter protests and COVID-19 have made 2020 a tumultuous year, but the elections too have been more tense than ever because of these two issues. Apart from that, the results were clear as day. Democrat Joe Biden, 78 and born in Pennsylvania, will succeed current president Donald Trump at the end of January of this year.

A lot of young people thought that it was time for their voices to be heard. But what makes young adults vote for a certain president? Thomas Chown, Sammy Winokur and Caroline Ceulemans voted for a different candidate. Thomas (20) voted for Donald Trump and lives in Florida, a republican state. Sammy (22) voted for Joe Biden and lives in California, which is a democratic state. Lastly, there’s Caroline. She moved to Wisconsin years ago with her family. Wisconsin is known to be a swing state, which means the amount of democratic voters and republican voters are more or less the same. Caroline herself, is a Biden supporter.

One of the most important aspects of the elections must be the candidates’ campaign. Both Joe Biden and Donald Trump have spent millions of dollars on theirs, all over the country. Biden will obviously campaign more in democratic states, as Trump will campaign more in republican states.

Sammy Winokur does not live in the US fulltime anymore but followed Biden’s campaign on social media. ‘I’ve liked Biden’s page on Facebook so I often get ads, both there and on Instagram. I occasionally got some Trump ads as well. As far as I know Trump did not campaign very aggressively in California, especially since he does not have rallies there much’, Sammy says. Thomas on the other hand, does live in Florida fulltime and experienced the campaigns very differently. Trump campaigned far more in Florida. ‘The Democrats would not really put Biden in public for fear his lapses in mental ability would be too noticable. Trump campaigned heavily, especially in public, even disregarding the COVID-19 guidelines. The democrats used this to try to criminalize the president’, he says.

In swing states like Wisconsin, it is very important for both candidates to campaign as much as they can to win the electoral votes. This means people here will be flooded with campaigns and rally’s from both Joe Biden and Donald Trump. ‘Both visited the state with their campaign teams and mobilized local campaign groups to organize projects like call banks. It is safe to say both campaigned an equal amount. However, I live in Milwaukee and the city is way more left leaning’, Caroline explains.

Not only campaigns but also education plays a very important role in forming a certain political preference. Young people are more vulnerable and easily influenced by what happens in their environment. This is why, it is important to take a look at how these people are educated, especially at school. This will have an impact on how they vote. In Belgium, we teach kids and young people the basics: what our political system looks like, and how it works. Depending on what you are studying, you will have conversations or maybe even debates about it.

Since the US is now more polarized than ever, speaking about this topic between the four walls of a classroom has become much harder. According to Sammy, he used to have classes which more or less forced everyone to confront and learn about American politics, in all different facets. In Florida on the other hand, politics normally stay out of classroom talk. ‘The issues are too polarizing in America right now for most people to have a civil discourse. Most information is through individual research and mainstream news networks, which are clearly biased’, Thomas says. In Caroline’s hometown Milwaukee, teachers, TA’s and professors aren’t even allowed to talk about politics in specific. It’s mostly just the students among themselves and student organizations putting out info stands on campus.

As mentioned before, the Black Lives Matter protests and COVID-19 are two important issues that the United States have been dealing with this past year. The way Donald Trump handled this has also influenced people’s voting behavior. Both Thomas and Sammy agree that president Trump handled polarization badly. While Thomas thinks this is largely due to leftist media demonizing everything Donald Trump does, Sammy just thinks it is because Donald Trump is lacking the ability of working with others. ‘Trump is a part of polarization, maybe even a symptom of it, and he certainly has not handled it’, Sammy adds.

When it comes to the COVID-19 crisis, Thomas prefers not to comment. ‘It has affected so many people differently, so there is a huge difference in opinion not only between parties but also within parties’, he says. For Sammy it is clear that Biden’s goal is to strengthen a lot of the social distancing and basic prevention rules. He says Biden shares his view that ignoring such rules and guidances, that comes directly from the top epidemiologists in the country and the world, is irresponsible and stupid.

Over the past few years, a lot of fake news has been spread. It was often hard to know what were facts and what was bull shit. While one politician was convinced something to be true, the other called it fake news. Topics there was no doubt about are the tax reduction, the US withdrawal from the 2015 nuclear deal and a decline of the unemployment rate.

A tax reduction may sound good to all of us. Thomas too, thinks taxes suck. He doesn’t like welfare and according to him, less taxes mean less welfare. ‘It also lets the people that work for their money retain more of it. Finally, it spurs economic growth’, he adds. Sammy one the other hand, is not so sure about the tax reduction. He says: ‘There are honestly so many more reasons why the US needs to increase taxes rather than decrease. Yes, it will stimulate spending, but the American government doesn’t provide healthcare, nor good education, nor fair treatment for minorities all of which could be benefited by increased taxes.’

Secondly, there is the US withdrawal form the 2015 nuclear deal. This is a deal in which Iran agrees to redesign, convert and reduce its nuclear facilities. In return, nuclear-related economic sanctions would be lifted. Initially the United States, the United Kingdom, France, China, Germany, Russia, the European Union and Iran agreed to this. In 2018, president Trump decided to withdraw the US from the Iran nuclear deal. This had to be one of the most remarkable decisions, since there has been a lot of tension between the US and Iran over the past few years. Nevertheless, Thomas is not worried. ‘Our military makes Iran look like an ant’, he says. Sammy, who has Middle Eastern Politics class, thinks it is definitely a blunder on Trump’s part. ‘Iran having nuclear weapons upsets the delicate balance of power that exists between the world’s major countries right now’, Sammy adds.

Next, a decline of the unemployment rate in the US had been a huge part of Trump’s campaign. While Thomas thinks it’s something all Americans should be happy about, Sammy thinks it’s not something Trump should be taking credit for. According to him, there is no evidence that Trump’s policies are what caused the drop. ‘Much more evidence points to the fact that the decline in the unemployment rate has been part of the larger economic trend of the US recovering from the Great Recession. It declined under Obama beginning in 2009, right after the Great Recession. I think it’s good that the unemployment rate has fallen under Trump, but I’m highly sceptical that he is the reason for the drop.’

It is easy to judge a certain situation when you are not in it. It is important to know how someone experiences a certain policy in daily life. Like this we can understand one’s perspective. ‘Prior to COVID, Trump’s policy gave us great economic success and the economy was amazing. He lowered regulations and made business very easy. He has also pushed for less lockdowns and wants to extend our freedom, which I love’, Thomas says.Trump’s policy does not really affect Sammy’s life. ‘I am a white male and definitely feel privileged. My parents fund all my activity so I have almost no exposure to any consequences of Trump’s policy, or almost any president’s policy for that matter’, he says. Although, since Trump’s ban on all travel from the EU-Schengen Area since COVID began, it has made travelling with his girlfriend to the US together impossible. This will put a strain on them, as a couple, when he inevitably goes home to visit his parents.

Maybe it’s not all black or white. Maybe there are some parts of the opposite’s policy that both Trump- and Biden supporters can agree with. For Biden supporter Sammy, Trump’s insistence that other countries in NATO (The North Atlantic Treaty Organization) need to pay their fair share for the organization’s valuable defense, is something he agrees with. Trump supporter Thomas does not agree with anything of Biden’s policy at all. ‘However, I do support the legalization of Marijuana’, he says.