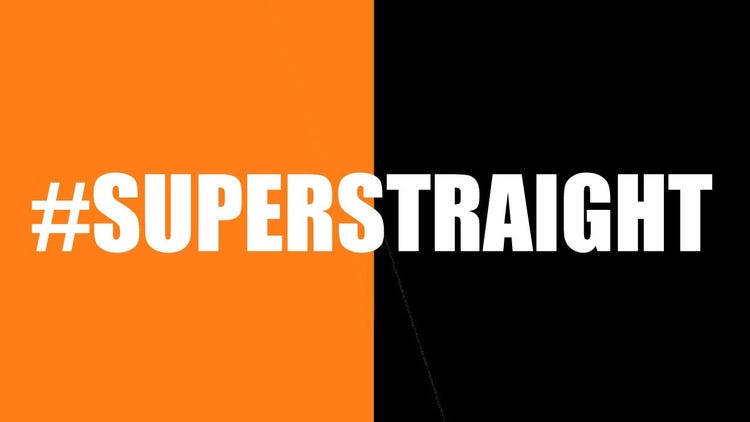 If you’re a frequent TikTok user, you’ve probably heard of the hashtag #superstraight. The trend is referring to a supposedly modern sexual orientation that, of course, isn’t new at all. It’s simply transphobia with a new name.

The “super straight” social media movement, in which users say a “new sexuality” that demands the same respect as those with oppressed sexual identities, is simply transphobia mocking LGBTQ people and their activism. It has gotten a lot of backlash and yet sadly a lot of people seem to support the trend. People have begun publicly identifying like this in the last two weeks to defend their views and hiding behind the truth of it all.

What many people don’t know is that the sole purpose of this trend was to cause chaos. Trolls specifically planned to provoke a reaction and cause discussions between the communities.

How did it start?

The American Kyle Royce, a 27 year old TikTok user, went viral after posting the video that started the trend. He recently coined the term “super straight” in a now-deleted video. Royce said that people couldn’t call him transphobic for refusing to date trans women, while also refusing to accept them as women. He pleaded for respect towards his sexuality. The infamous video got more than two million likes, before finally getting taken down. The trend was born on the app but continued to gain popularity on 4chan, an internet site that’s mostly meant to post and criticize images.

Lots of 4chan users continued to spread the trend in order to cause troubles within the LGBTQ+ circles. The acronym SS, for Super Straight, has been linked by various 4chan users to the Nazis. They even went as far as combining it with the Nazi salute and calling out everyone who invalidates their “sexual identity”.

Recently the superstraight invented a personal so-called ‘pride flag’, which holds the colors orange and black. It has been speculated that these colours are meant to imitate the PornHub logo, but no real proof surrounding this has been found. People on Twitter also quickly came to action and realized the colors also match those of the gay dating app, Grindr. In an attempt to mock the community many of them also put the ‘flag’ in their bios, just like many LGBTQ users put the gay pride flag emoji in theirs. Above all of this, they have also made multiple fake “coming out” videos. These types of videos are usually very personal and touching, when they are actually real.

American amateur rapper Robert Charles’ song ‘super straight’ from 2012 has suddenly gotten a lot of success due to the hook that says “I’m super straight, please don’t hate me, I was born this way”. The tune has been promoted to the “pride anthem”, again ridiculing the LGBTQ+ community.

The feud between superstraights and the LGBTQ+ community

Royce stated that the video was ‘never meant to be hateful’ and that he’s just saying what lots of people think but are too scared to share. He told Mashable Inc, a global news site: “The only reason I created it was because I  was sick of being labeled with the very negative terms for having a preference, something I can’t control, and getting labeled by the community that preaches acceptance with that sort of stuff.”

“Believing that all transgender people are unattractive to you and not accepting it for that matter, is extremely transphobic…”

Trans activists quickly came to action and corrected him. They described exactly why the trend is such a big problem and should be forgotten as quickly as possible.

The activists stated  that not wanting to date a specific person who happens to be trans is not necessarily transphobic. The transphobic part of it all, despite Royce’s reasoning, is not wanting to date someone purely because they are trans. Brynn Tannehill, a trans activist and columnist, explained that: “Believing that all transgender people are unattractive to you and not accepting it for that matter, is extremely transphobic and has nothing to do with your preference.”

There’s an important difference between the Super Straight community and other sexualities.

The term “Super Straight” refers to a person’s attraction to a physical trait that is more specific than someone’s gender. No sexuality in the LGBTQ+ community focuses on a particular physical trait within a gender group. There’s no sexuality for those attracted to specific skin colors, hair color, height, etc.

The problem with the SS community is their choice to define a sexuality based on attraction to someone’s natural genitalia. This invalidates and disrespects trans people by refusing to see trans women as “real” women (and trans men as “real” men). Nobody is obligated to date or have sex with trans people, but organizing an identity and a movement purely around their exclusion is eerily unnecessary.

For these reasons they have no place in the LGBTQ+ community.