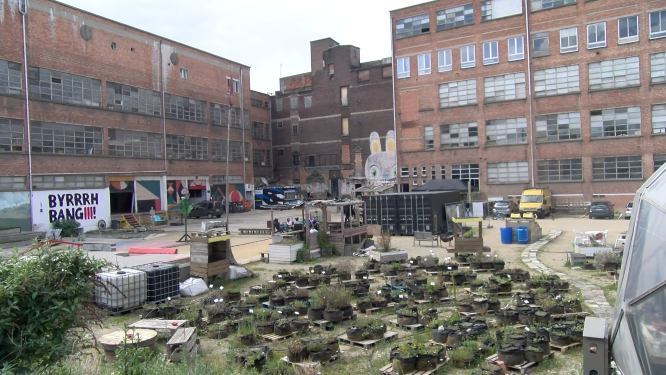 The southwest area of the Cureghem neighbourhood in Anderlecht, Brussels is getting an upgrade. 130,000 m² will be transformed into housing, a French-speaking school, rental and purchase spaces for economic purposes and an accompanying car park. The works are estimated to start in October 2024. The whole construction should be finished by 2028.

CityDev Brussels, formerly known as the Regional Development Agency for the Brussels Capital Region, bought the vacant premises of a former medicine factory in 2015. In anticipation of the triptych project, CityDev Brussels leased the property to the BVBA Entrakt in 2017. This company was founded in 2009 with the aim to sublet empty buildings to starting organisations, companies and artists. They offer these spaces at an affordable price to a mix of regular clients and occasional tenants. This way, they want to fill in the temporary vacancy of buildings in a positive way.

In anticipation of the works in 2024, they have transformed the old medicine factory, Vesdre Continental, into Studio Citygate. Watch the video above to learn more about studio Citygate.