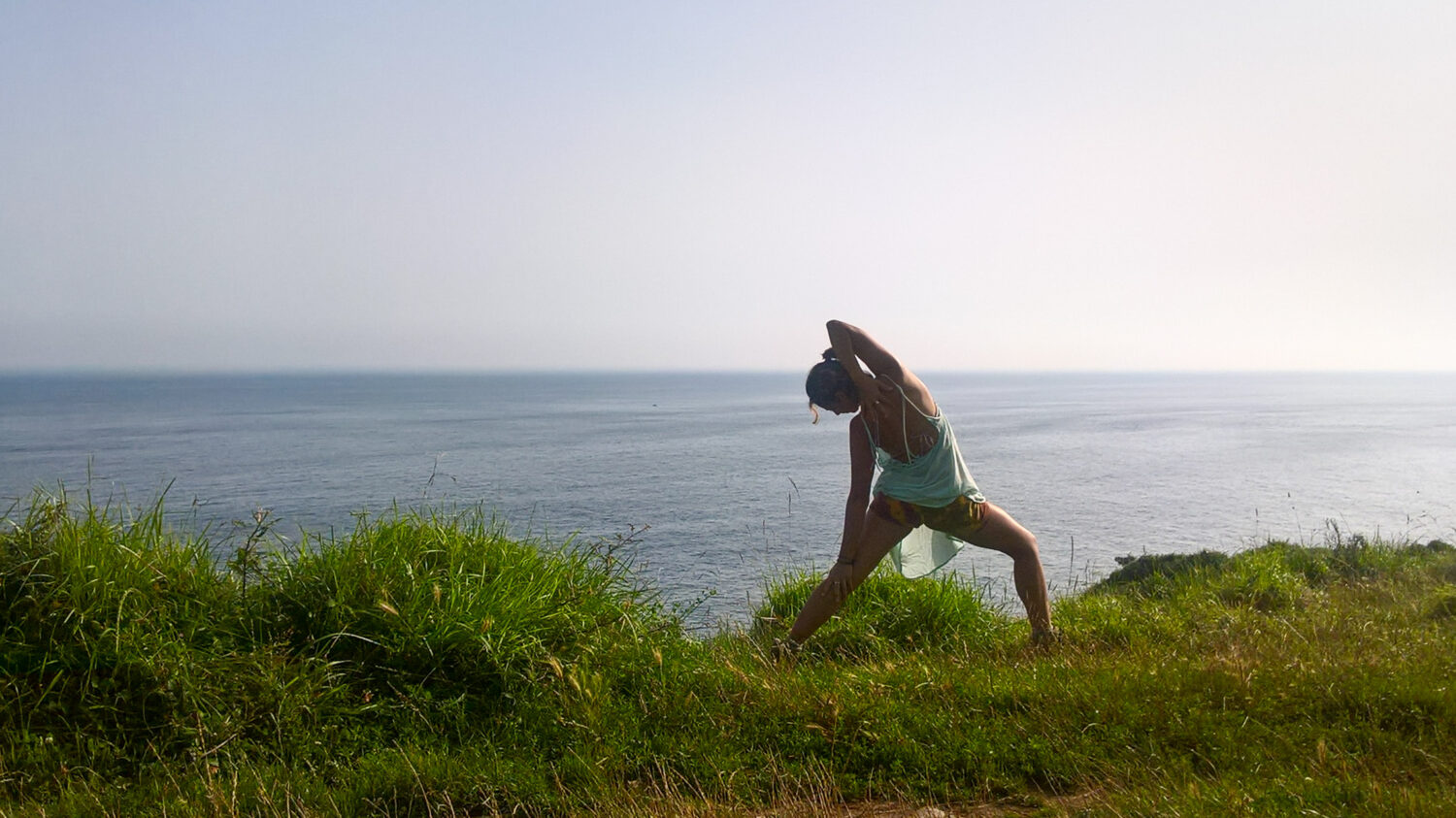 Yoga is booming! During the pandemic, many searched for peace in yoga. Yoga teachers around the world saw an increase in interest, and online yoga classes surged. Research store Research and Markets also reported a 154 percent growth in the yoga equipment market. But what is all the hype about? Yoga teachers Reetu Mehta and Mira Blanctaert explain yoga and all its nuances.

Belgian yoga teacher Mira Blanctaert discovered yoga on a roundtrip through Asia. In 2020, she finished her yoga training to become a licensed teacher. ‘In the first place, yoga is movement, sport, breathing, feeling your body. But on the other hand, I am very interested in its philosophical background. I think it’s important to be aware that our western yoga – mainly moving, breathing and meditation – also has a higher purpose.’

On the other hand, Reetu Mehta, an Indian yoga teacher based in Antwerp, has been into yoga since she was a kid. ‘For me, yoga is a way of life. It is not a practice that you do only on the mat. But it’s something that you apply to the rest of the day and therefore to the rest of your life – how you deal with people, with yourself, your emotions, your feelings. It is not only physical but also spiritual.’

When are you into yoga?
Blanctaert: ‘I think it comes from intent. I can do a yoga pose, but it’s not yoga if I’m just stretching. With intention, you can turn anything into yoga. I have had many classes where the mindful meditative aspect came up a lot, but my thoughts were elsewhere. It eventually depends on what you make of it yourself.

In that same vein, maybe you can turn a Pilates or Zumba class, weight training, swimming, or running into yoga by being in tune with your breathing and focusing on what you are doing and feeling. From the moment you are working on that intention, you are doing yoga in my eyes.

I do believe that the spiritual aspect is inherent to the practice. The poses and breathing exercises are there for a reason. Practicing those kinds of exercises in itself is going to affect your body and mind. In yoga classes, it shouldn’t be a thing of “we’re going to do this exercise now because then we’re going to feel the energy inside.” That’s unnecessary because it’s going to happen anyway.’ 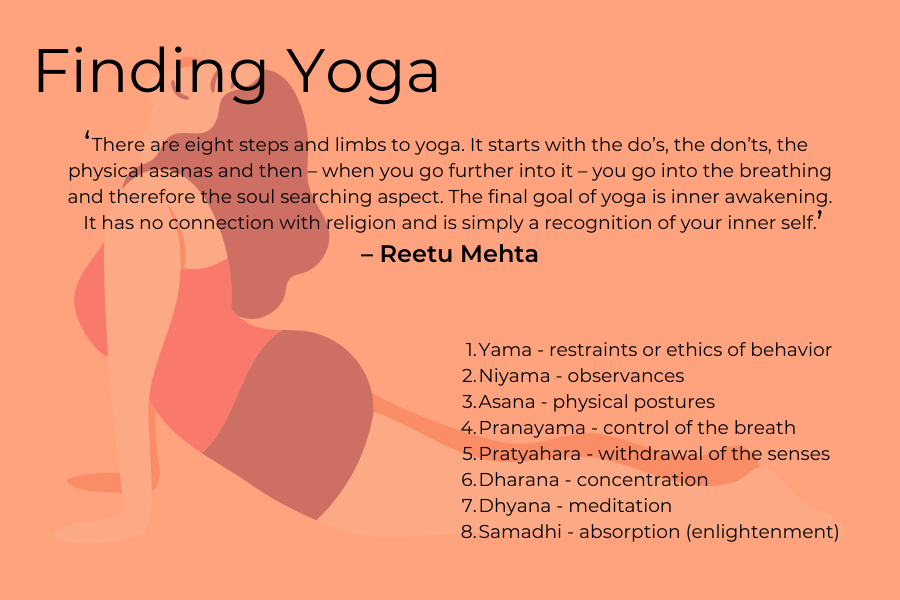 Mehta: ‘Everyone who practices asanas thinks they’re into yoga, but they’re only into the physical aspect of yoga. A gymnast can do that as well, and a gymnast is not in yoga.

The final goal of yoga is inner awakening. That journey begins with the physical because if you don’t know your own body, how are you going to know your mind or your inner self? Combining the right form of breathing and the asanas is important because yoga doesn’t reach deep to the healing level until you connect it with breathing.

‘The yoga journey begins with the physical because if you don’t know your own body, how are you going to know your inner self?’

I wish people knew that the physical aspect is just the tip of the iceberg with yoga. Sadly, that is the focus in the west. On the same note, I do see a change. There is so much suffering, loss, and pain in the world that everyone is seeking answers. Looking for those answers of “Who am I? Why am I here? How can I make a difference?” People do find those paths with yoga.’

New forms of yoga
Blanctaert: ‘When more people do yoga and come into contact with it, I only see the positives. I also notice that the more and the longer someone does yoga, the chiller they are about it. The less it is about what they can do – what crazy positions they can take on and how strong they are – and the more they experience it individually.

I never watched yoga online before the lockdown, but I was pleased that YouTube existed during it. Before that, I went to classes or did my practice on my own, but there is only so much you can do yourself before you reach the end of your abilities.

When I started watching YouTube videos, I came into contact with many different types of yoga. For example, Power Yoga – which is really hard – or Kundalini yoga – where you sometimes raise and lower your arm for ten minutes straight. You have super good teachers online too, and it is nice to know that it’ll always be there.’ 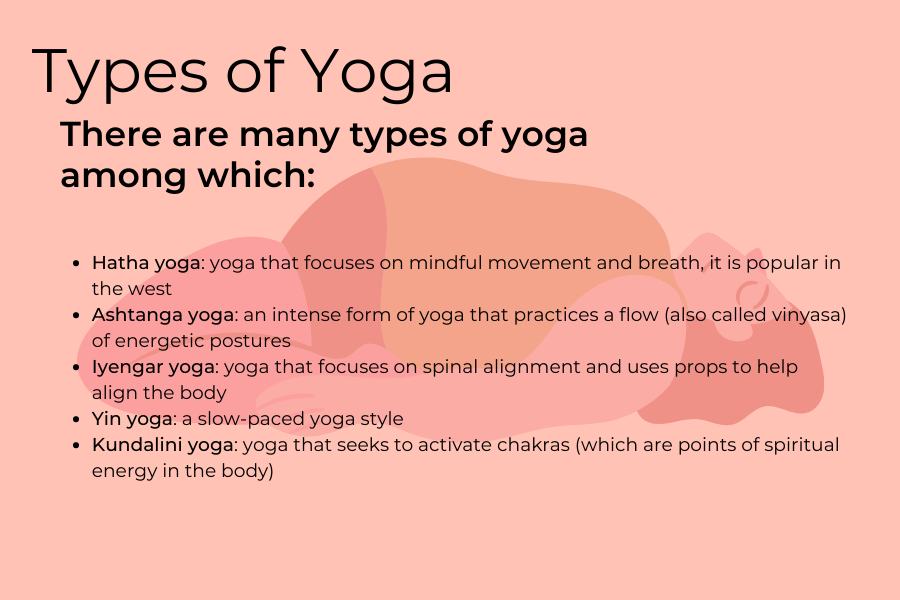 Mehta: ‘In yoga, you use your body the way it is. I teach the Iyengar style of yoga, a type of yoga that uses props such as straps or belts. The idea is that your body is not doing the same movements as when yoga was formed. With our sedentary lifestyle, we don’t even sit on the floor that much; we’re always on chairs. And then you expect to do the whole yoga process in a cross-legged position?

That is going to cause you pain, discomfort, and dislocation. So we adapt by evolving different techniques to help your body get into specific positions so that you don’t hurt it. The same, I would think, happens with Aerial yoga, for example. I support those new forms as long as safety and the right aspects of yoga are maintained.

Power yoga is very much a form of ‘yoga’ that I don’t agree with at all. Power yoga uses quick fast movements. Which yoga is not about; yoga is about mind and body control and watching the breath. There is no way that you’re able to do that while doing cardio or an exercise routine. You can use Power Yoga as an exercise tool, for sure, but saying it has the yoga benefits, that I disagree with.’

Social media and yoga
Mehta: ‘Social media platforms connect with younger audiences. But I don’t like that people only post pictures of yoga in the most perfect bodies because that kills the whole idea of yoga. So it’s an effort for me because you have to be on social media, even to help others and pass this message forward. I do think social media is changing in that respect because awareness is increasing online – cultural and geographical awareness and awareness of others’ needs and requirements.’

Blanctaert: ‘Most Instagram yogis that I see are people who are clearly gymnasts. They are super flexible and can do crazy handstands. They do those 30-second videos where they do the craziest funky poses while you are happy to reach your toes with your hands. You’re confronted with the best of the best at all times, but that’s the problem with everything on social media. It is double. Your frame of reference of what a good yogi is is no longer realistic. But I’ve discovered some cool things through Instagram.’

Is yoga for everyone?
Mehta: ‘The misconception that yoga is only for super flexible people is completely wrong. Every body type has a limitation, and there is no reason to cross that limitation. It is completely fine to stick to your form and advance in that form to your best ability. That doesn’t mean you are any less into yoga than anyone else.

If there is a physical limitation, yoga will help you mentally or spiritually. Yoga is meant for unfit or unflexible people and for those who have pain and problems in their bodies. That’s the healing that yoga does. Otherwise, how is it more special or important than anything else that we do physically?’

Blanctaert: ‘Yoga is a broader aspect than just asanas. A person may not be able to move, but they can meditate, do breathing exercises, or feel their body. There is an aspect to yoga for everyone. I can imagine certain states of mind or situations where there is no room for you to engage in yoga, but I do believe that everyone has it in them.’

Exercise or a lifestyle
Blanctaert: ‘Yoga is in the now. With consistent practice – doing the movements and the breathing exercises for an hour every day – it starts to seep into the rest of your life. You begin implementing it on many levels. For example, standing in a queue in the store used to be terrible, now that’s three minutes where I can do a breathing exercise. When it becomes part of you, it is no longer just a sport that you do for an hour on Monday and Friday, for example. A sport generally stops when you stop. But the things you learn in yoga, you keep doing all the time.’

‘Standing in a queue in the store used to be terrible, now that’s three minutes where I can do a breathing exercise’

Mehta: ‘I can say from experience that you’re never in yoga and done. It is constantly evolving with you. And the more you’re in it, the more you realize its benefits and understand that there is so much to learn and do. You end up learning how yoga evolves for you. The whole mindset, the whole practice changes you, slowly, with how life evolves and changes. So, you’re never totally in it. But the good thing is, when you practice yoga more regularly and form a habit, you can say, “Yes, yoga is a part of my life now.”’