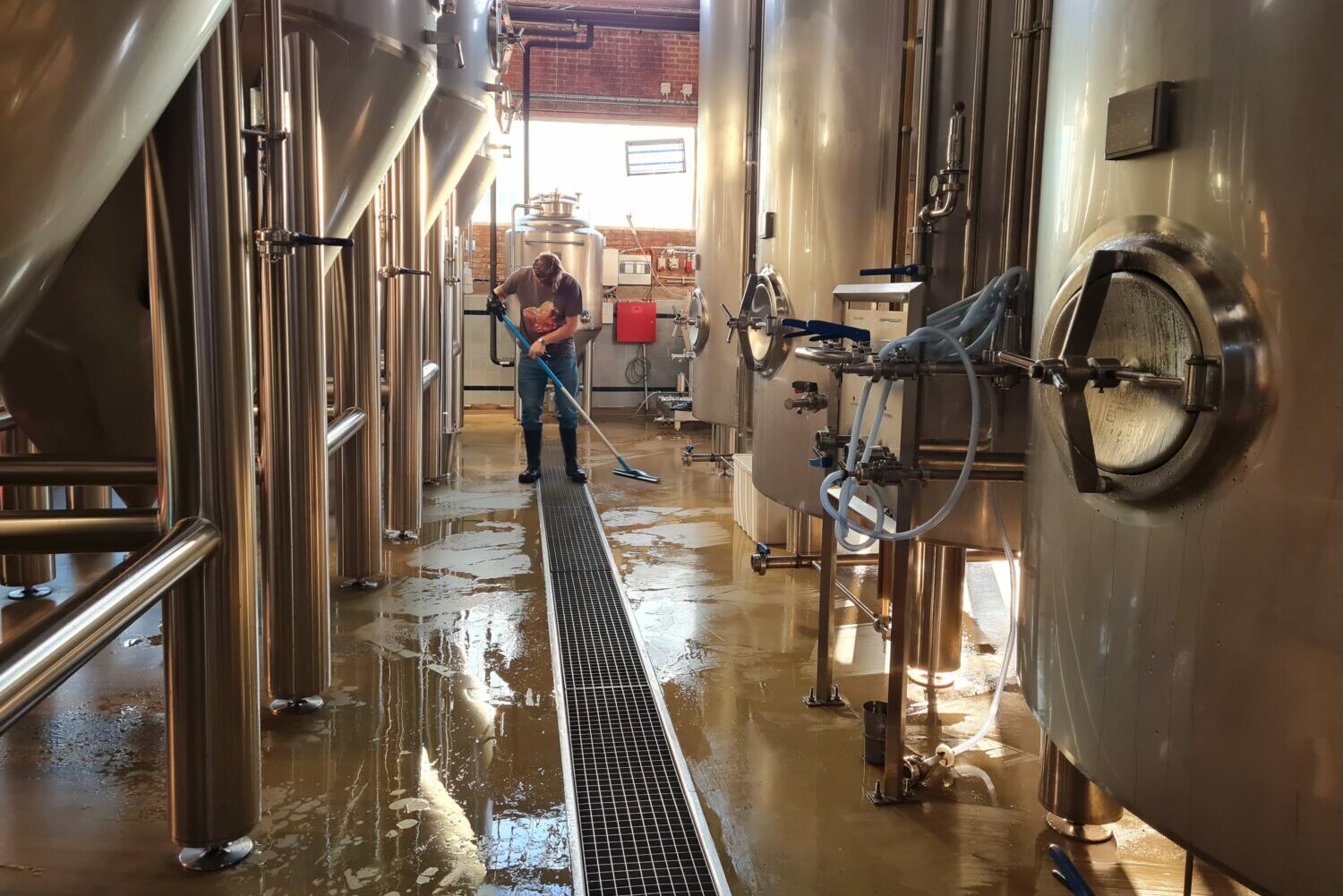 August 6 is international beer day, the perfect day for international students to experience that famous Belgian beer culture. Because Belgium really is the king of beer. Or is it? The numbers hide a fascinating story. ‘A big part of the Belgian reputation has been made by an Englishman.’

Why is Belgium known for beer? They drink a lot of beer, of course. Wrong! Belgium isn’t the biggest beer-drinking country in the world. It’s the Czech Republic that chugs the most liters in a year. And with 189 liters of beer drank per person in 2019, they stand lonely at the top.

So, cheap Czech beer is costing Belgium its number one spot? Well, no, because Belgium doesn’t even get a place in the top ten list. 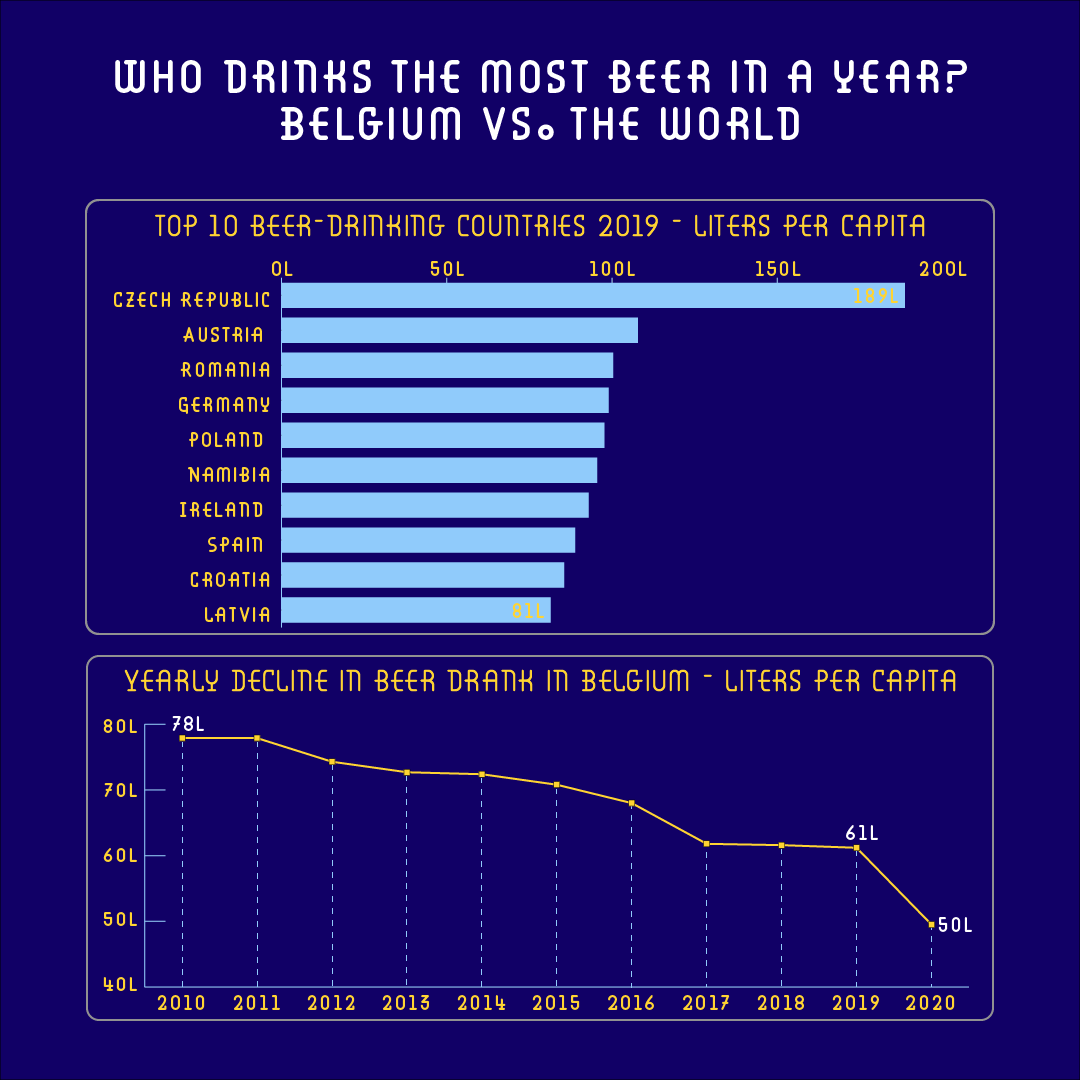 In fact, Belgian beer consumption has been going down every year. In 2019 Belgians drank about 17 liters less than a decade ago, making them only twenty-fifth worldwide.

According to the 2020 annual report of the Belgian Brewers Association, 2020 was an especially bad year because of the COVID-19 health crisis.

Breweries
Belgium also doesn’t have an outstanding amount of breweries. The 340 breweries Belgium had in 2019 accounted for 30 breweries per million inhabitants. Compared to 30 other European countries, this is an average amount. The Czech Republic, Luxemburg, and Slovenia take the top spots.

Frequent
Those statistics do not indicate a flourishing beer culture. Belgium is well-known for beer, though. Its beer culture even earned a spot on the UNESCO world heritage list.

So, why are the numbers so mystifying? Belgian drinking habits might give a better insight. 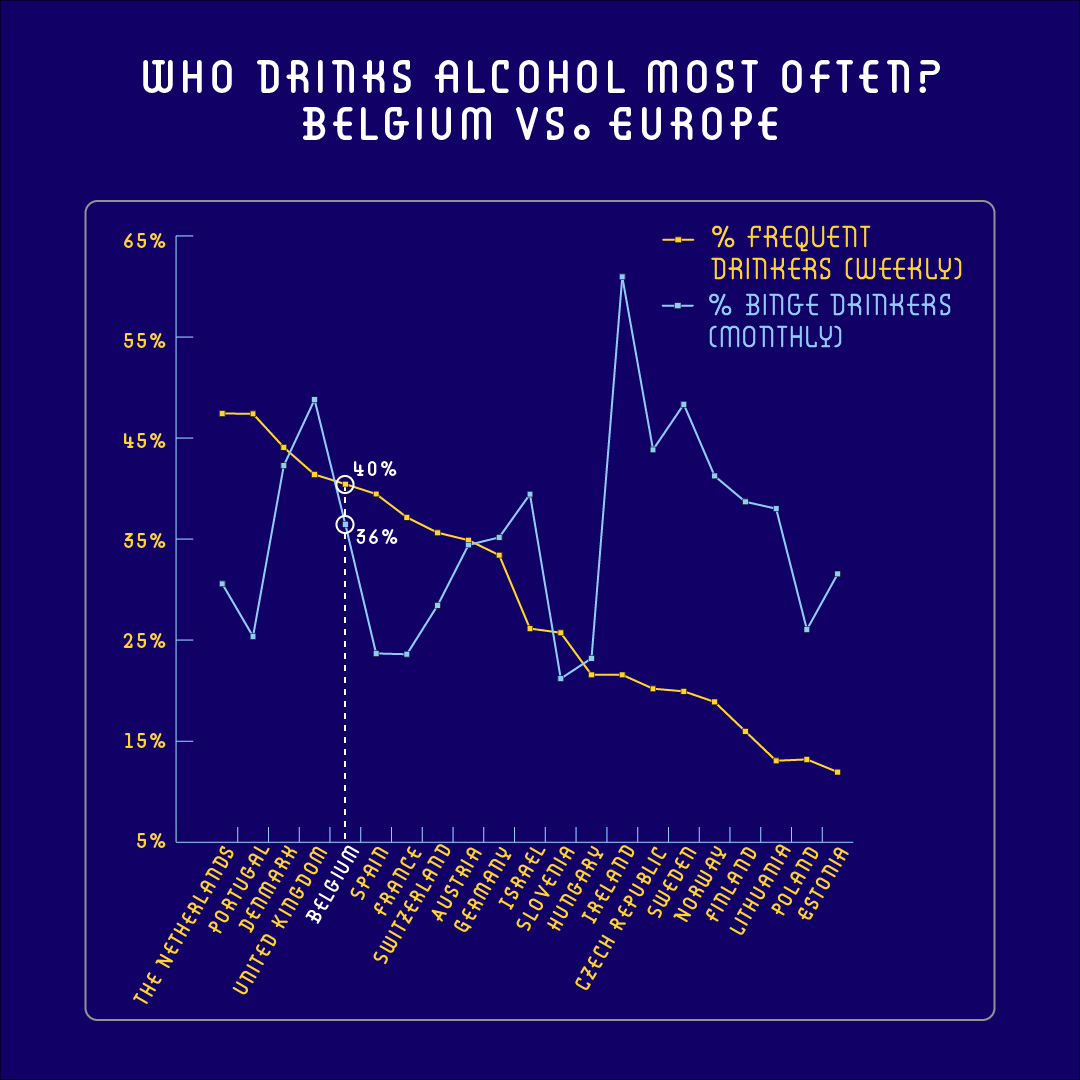 Belgians do drink often compared to other European countries. A 2016 European Social Survey and University of Leuven study investigated patterns of general alcohol consumption in 21 countries. They found that 40 percent of Belgians drink several times a week and 36 percent binge drink at least once a month.

However, this regular drinking doesn’t land them in the top ten of the biggest beer-drinking countries because Belgians don’t drink much when they do. At least, not compared to other European countries. 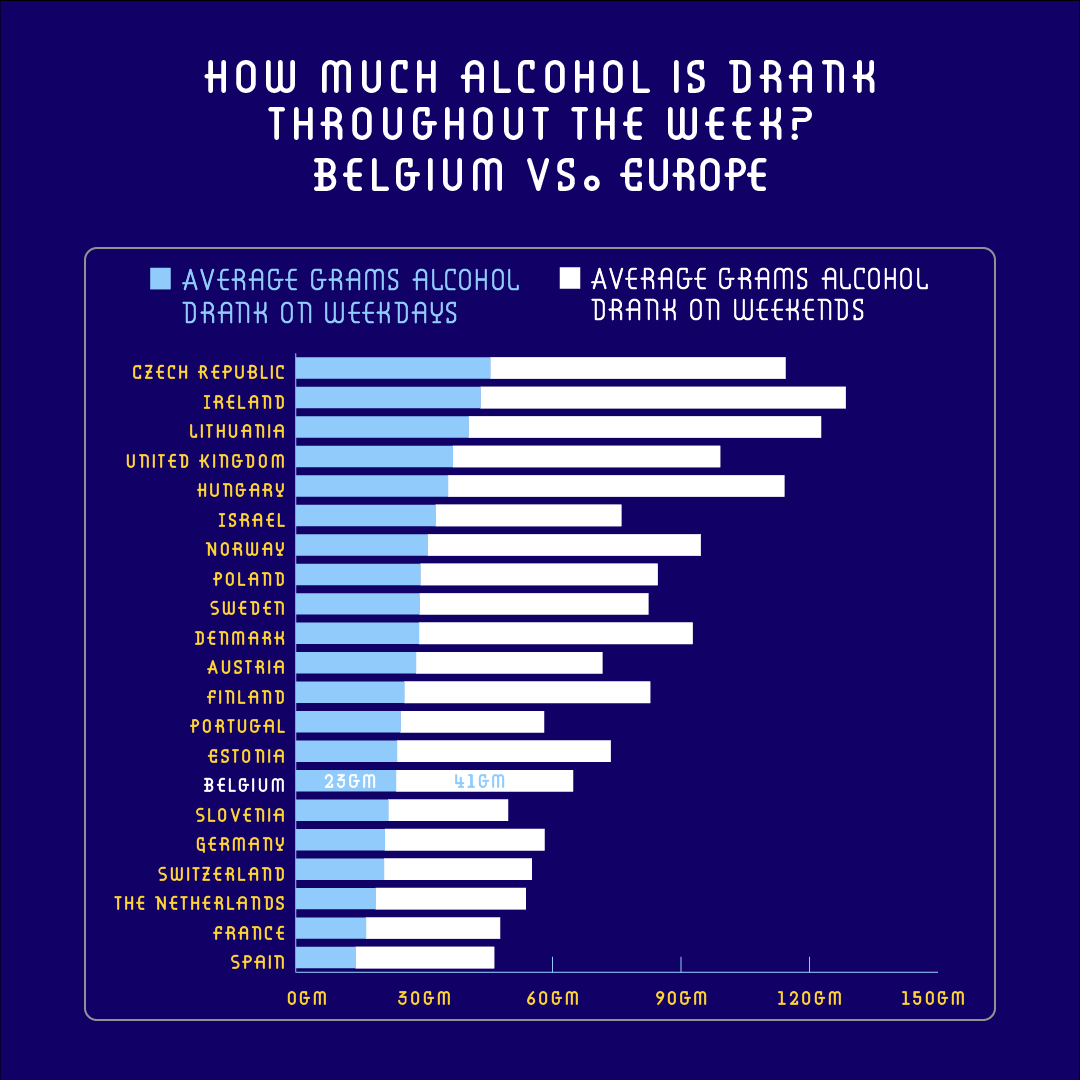 but moderate
So, Belgians are frequent but moderate drinkers. ‘The Czech often drink beer of a low alcohol percentage,’ Director of the Brussels Beer Challenge and Chief Editor of the Bier Grand Cru magazine Luc De Raedemaeker explains.

‘Belgians generally drink fewer liters of beers with a higher alcohol percentage. We go for tasty beers to drink at ease. And, of course, then the volume of beer decreases. It is quality versus quantity.’

‘It is quality versus quantity’

There is a historical reason for this difference. ‘Countries like the Netherlands lost their beer culture after World War II to the popularity of the pilsner. (editor’s note: a light type of beer) While Belgium managed to keep its historical beers,’ De Raedemaeker explains.

A second historical reason, he goes on to explain, comes from excellent brewers’ classes. ‘At the end of the 19th century, the Belgian government invested in training for brewers. Before that, education in England and Germany was much better.’

Brewing education
The University of Leuven even introduced its first postgraduate in Malting and Brewing Sciences last year.

Mahendra Bhattarai from Nepal was among the first seven students to follow the new course. ‘I had some practical experience in beer and brewing and a master’s degree in Food Technology. So, I wanted to learn more about the science and technical aspects of brewing.’

Bhattarai explains how they learned about the raw materials used in malting and brewing, the brewing process, and innovation in the industry. ‘There were several lectures from industry experts and some hands-on experience of both malting and brewing.’

Beer tasting and brewery visits were also a part of the course: ‘Tasting different kinds of beer while knowing the background of brewing was interesting. However, due to the COVID situation, we were not able to visit breweries which was the saddest part.’

When asked what he knew of the reputation of Belgian beer before, Bhattarai answers: ‘I knew Belgium has a long history of brewing and is famous for its various beers.’

Michael Jackson
De Raedemaeker explains how that reputation came to be. ‘In the 80s and 90s, Michael Jackson, not the singer but the journalist, wrote The great beers of Belgium book and made episodes about Belgian beer on Discovery Channel.’

‘Therefore, a big part of the Belgian reputation has been made by an Englishman,’ he concludes. ‘On the other hand, AB InBev (editor’s note: a Belgian-Brazilian brewing multinational) promoted Belgian beer with their Belgian beer cafés.’

These cafés have the look, feel, and – of course – beers of a typical Belgian café. They have been set up all around the globe.

And here, the numbers support the story. Three-quarters of all beer brewed in Belgium is exported. 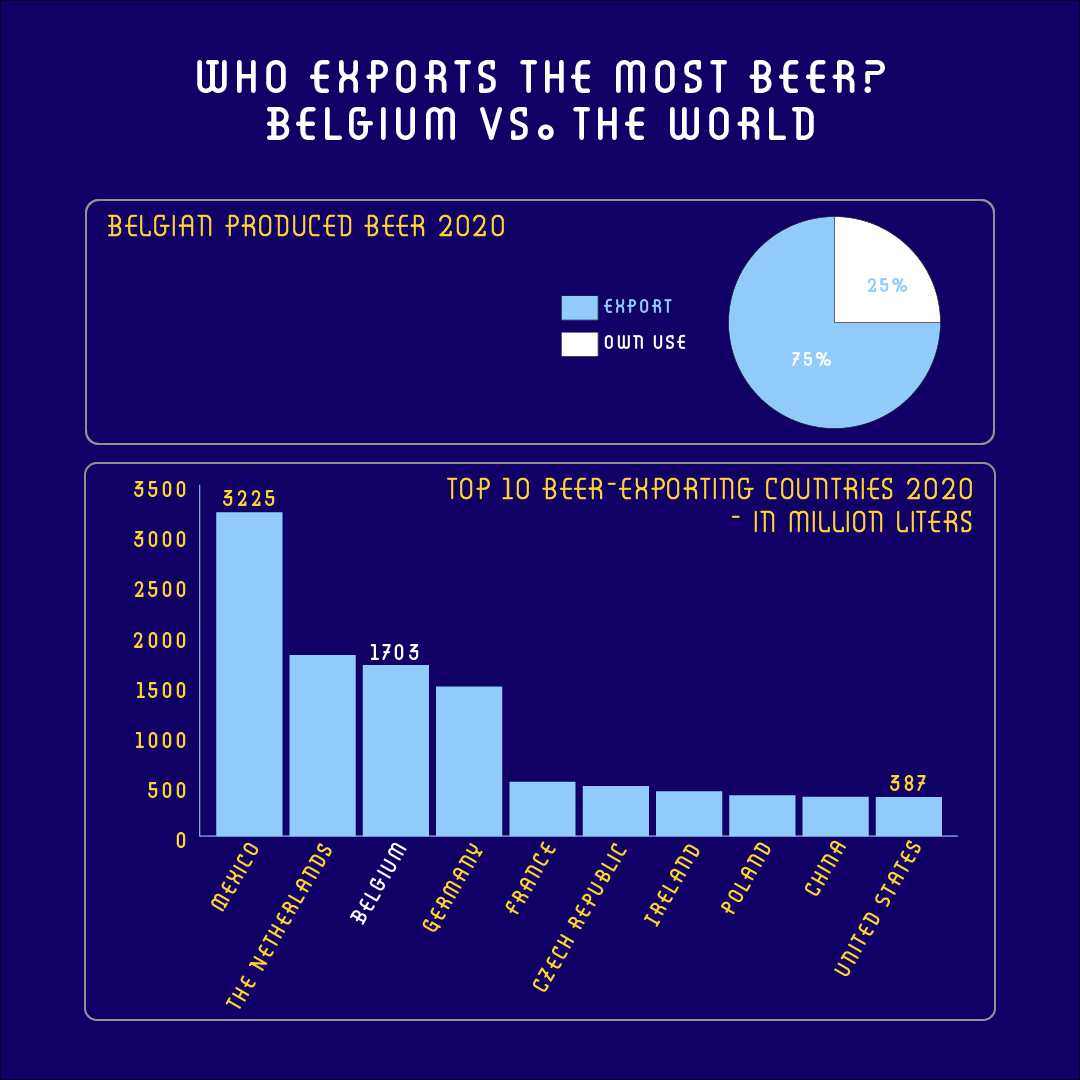 Multinational AB InBev is the leading brewing group worldwide. This all makes Belgium the third-largest beer-exporting country. Both in liters (as shown on the graph) but also in market value.

Mixing old and young
‘We’ve always been a country with many different types of beers,’ De Raedemaeker explains. ‘At some point, all European countries, except for England, Belgium, and a small part of Germany, were dominated by pilsners.’

In Belgium, regional beers are still abundant. ‘Belgium is known for the varieties of historic and specialty beer, and the country is full of small and large breweries,’ Bhattarai adds.

And while the map earlier showed that Belgium doesn’t have an outrageous amount of breweries, there is a yearly uptick in recognized breweries. Between 2019 and 2020, 39 more breweries were added to the list of the Belgian Brewers Association.

‘If you try different beers each day, there are still lots of beer left to be tasted’

Bhattarai also explains how Belgian brewers use unique processes: ‘Some specialty beers are produced by spontaneous fermentation, meaning the surrounding microflora ferments them. Some beers are prepared by mixing old and young beer, which is unique.’

Bhattarai himself said to be surprised by the variation in beers: ‘It is not possible to know and taste all the types of beer available in Belgium. If you try different beers each day in Belgium, there are still lots of beers left to be tasted. I am always fascinated by finding a peculiar taste for each beer found in Belgium.’

Cheers!
More than its reputation, history, or beer variety, Belgians ‘just like to go to cafes,’ De Raedemaeker states. ‘In normal times, there is a very good cafe life and many beer festivals.’

‘People in Belgium enjoy drinking beer, and they give high importance to the brewing culture,’ Bhattarai agrees. While he dreams of starting up his own brewery, he will start his next job with a Belgian Biotechnology company. But ‘after finishing the program in July,’ he says he is first, ‘enjoying free days and drinking lots of beer.’