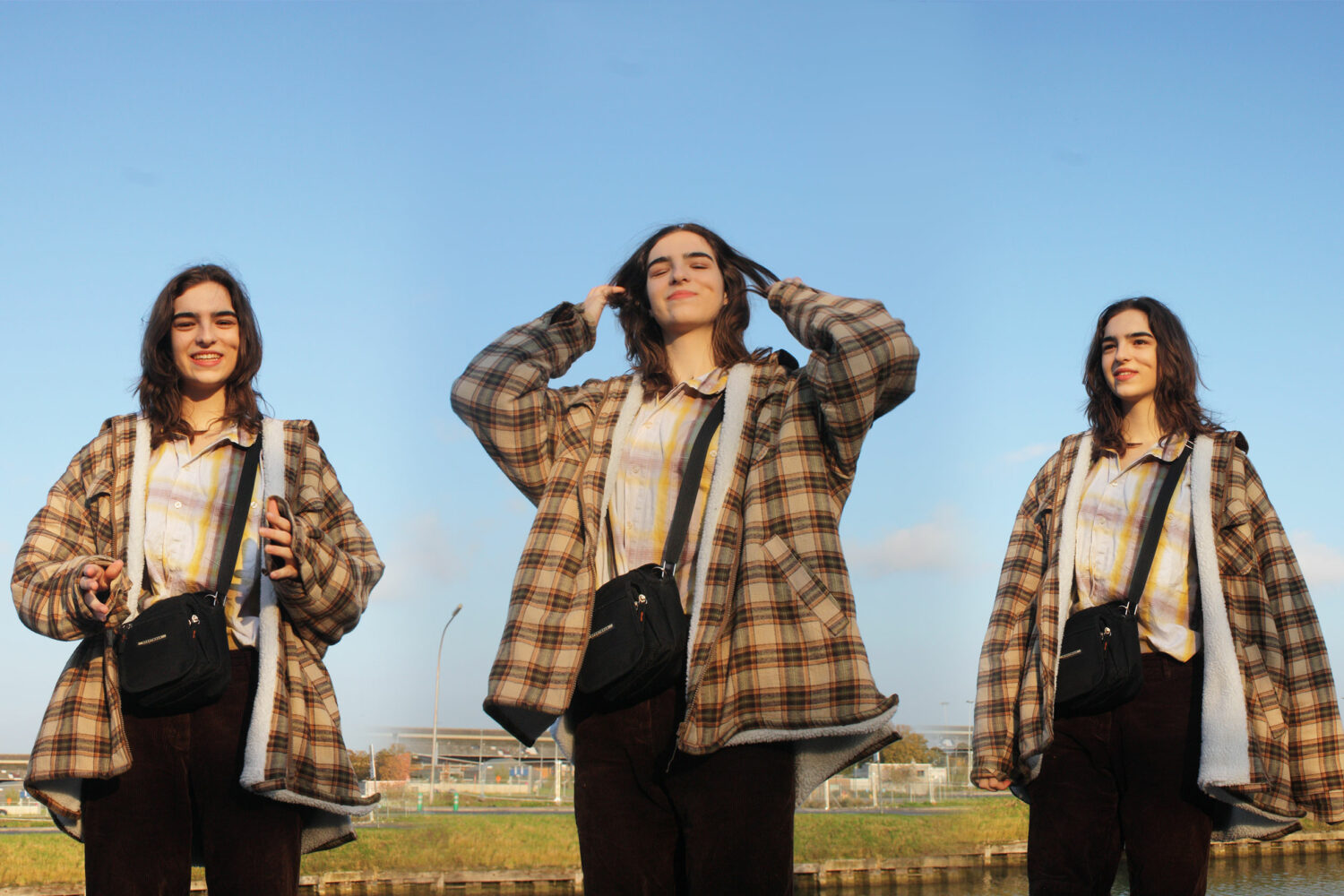 As the new academic year is well on its way, many students are slowly settling into their new courses. Britt Jongebreur (20), or BiJo for the fans, is one of these students who started her first year of International Media & Entertainment Business at Thomas More Mechelen. On top of that, she combines her study with a peculiar time-consuming hobby, namely a three-year stand-up comedy course. ‘Even though I try to place my comedy course as a second priority, in reality, I’m constantly working and finding new ideas for my stand-up performances.’

BiJo, what is the story behind this name?
‘I decided to make BiJo my stage name because I found my name as it is relatively basic. Britt is quite a popular name in Belgium so in school, I was often the “girl with the same name”. In class, I kept hearing my name but I felt like my peers or teachers were not talking to me. I also spent a year studying abroad in London where my name spurred a lot of confusion. Imagine having to explain your name is Britt to local brits you meet, ugh, it was extremely frustrating.  Safe to say, I’m not the biggest fan of my name. From there the name BiJo, ‘Bi’ for Britt and ‘Jo’ for Jongebreur.’

What got you into stand-up comedy?
‘It is something I’ve always been interested in since my childhood. I used to and still looove to entertain people, whether it is with little plays or just making people laugh in general.’

‘Studying drama in high school and screen acting in London sparked my love for performing even more. In the UK, I had a class called Improvisation and every time I had to perform in front of my peers, everyone was on the floor laughing. It is then that I realised I wanted to combine my sense of humour and love of performing. Stand-up comedy was in my case a dream-come-true combo.’

Is Mechelen the place to be when you aspire to become a comedian?
‘The Cabaret and Comedy course at the Music School in Mechelen is one of the best places to learn comedy in my opinion. Before being allowed to even join the class, all students are required to undergo an interview to see how dedicated and passionate they are towards comedy. My class only has five people, four students and one teacher, Thomas Smith.’

‘Thomas doesn’t want a huge group as he finds providing personal feedback very important. He knows what he’s doing and is very good at what he does. In general, I don’t have any comedians I look up to, but in a way, I do idolise him. For example, I could perform a shit piece and he can turn it into something incredible in a second.’

What does a typical stand-up comedy class look like?
‘I can say with absolute certainty that I have never experienced a dull stand-up class. We get together once a week and start the class by talking about all the things that happened in the past week. Then we practice our pieces for an hour or so before performing them on stage where we receive a lot of feedback. Usually, we work on a single piece for weeks on end, but I get bored easily so I tend to start a new piece every week. I find it difficult to finish my pieces because it’s intense to work on one piece for a long time.’

‘Two hours, once a week for three years, doesn’t seem like a lot but in reality, you’re constantly working and finding new ideas for your pieces. Making a good comedy piece is a lot harder than people think.’

What makes a stand-up comedy piece successful?
‘Relatability is the key to success in comedy. If people can recognise themselves in certain situations, they will find it amusing. I think that absurdness and quirkiness make people laugh as well. Constantly observing everyday life is the best way to find content for pieces because that is what is most relatable.’

‘At the beginning of the course, we had to buy a small book in which we had to write down everything that we found funny. For example, if you were talking with someone and they started laughing, we had to write down what triggered them to start doing so. We also noted everything that we experienced throughout the day that spurred a strong emotion within us like anger, sadness, happiness, fear, disgust, or surprise. That is how we learn to make our performance pieces emotionally driven.’

‘I’ve made works about excrement and broken vibrators’

Where do you find most of your inspiration for your pieces?
‘I’m quite an awkward person so I encounter a lot of uneasy situations daily. I use them as a basis for my piece but I like to add little fantasies to them. My plays are based on everyday things but twisted in some kind of way. Like for example (unsure laugh), I’m currently writing a piece about my mom who has insane sleeping issues. In that piece though, I made it seem like she wakes up possessed by a demon who bothers her at night. There is no limit when it comes to choosing my topics. I have made works that have been about excrement, a broken vibrator, why biking isn’t fun and why cats are annoying.

‘You need to be careful when crossing the line in comedy, especially in today’s society’

Do you believe there is such a thing as crossing a line in the comedy world?
‘Comedy does that a lot, crossing the lines. I cross the line sometimes but I don’t feel bad about it although you do need to be careful because it is a fine border, especially in today’s society. As a comedian, if you keep crossing the line people will just think you’re a dick. Comedy is a very subjective genre and the audience just has to accept that sometimes. Some comedians are very ruthless when covering certain topics which some people will love while others will be repelled by it.’

‘Overall, the unspoken rule when it comes to “crossing a line” in the comedy world is that humour should always be prioritised when talking about societal issues. Comedy can be used as an activist platform when covering certain issues as long as it is more joking than it is speech.’

So after three years, you will officially be a comedian, is that right?
‘Yes, hopefully! If all goes well, I will have received my diploma which I can put on my resume. By then I should have also finished my studies for International Media & Entertainment Business.

‘In the future, I would love to do something that combines my knowledge of these two courses. Perhaps I can start my own company that combines the two, but that is just an idea at the moment.’

There is a saying that people use humour to hide their pain. Do you agree with this?
‘I understand why people say that and if I’m being honest, I do it too. However, I don’t use it to hide the pain but more as a way to forget it. I guess it’s always been my intention to make other people laugh and make them feel good instead of myself. If I can’t feel good myself, it brings me joy to make other people feel happy.’

Is the BiJo we see on stage different than everyday Britt?
‘Your presence on stage is very important in comedy. It also depends on the person you are portraying of course. The person you become on stage is basically a blown-up version of yourself. My persona for example is an awkward person so I personify it as an extremely quirky and uneasy person on stage. Most comedians take the same approach I do, yet, some take on an opposite character to what they are like themselves, which I find quite talented as well.’

‘Professional comedians play on a whole other level’

Do you have any intentions to compete in stand-up competitions?
‘I’m not there yet. I need to step up my game to be able to compete in professional competitions before I join their game as they play on a whole other level. They play comedy every single day which I should be doing but balancing my school and this comedy course has me slacking a bit. If I take it a little more serious, I would be open to giving it a try. Even Thomas said people often underestimate these stand-up competitions. If you end up winning, tours start almost immediately which can be very overwhelming.’

‘I am open to trying an open-mic one day though. That’s where you improvise on stage. It is a very risky style of comedy but I would love to try it soon.’

What do your parents think about your comedian activities?
‘In general, my parents let me do what I want to do. I’m not sure if they believe in me 100%, but that’s fine. They weren’t surprised at all when I told them I wanted to join a comedy course. They know comedy is my passion and have been very supportive throughout.

Even when you told them your mom was featured in a piece about her being possessed by a demon in her sleep?
(Laughs) ‘Hmm, well. She wasn’t very thrilled about that I’ll be honest. But I told her that I received a lot of positive feedback on that piece so she wasn’t that bothered after all.’