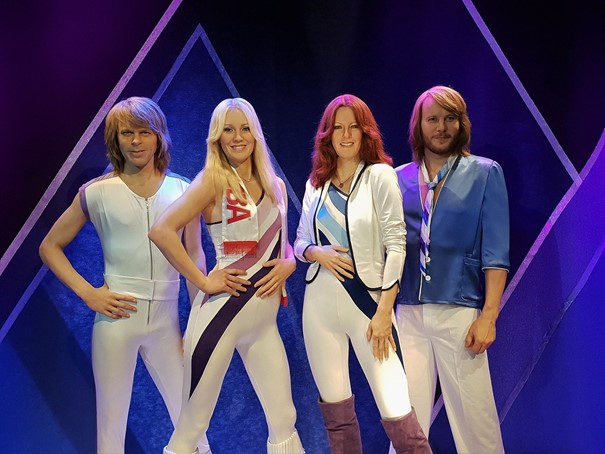 Abba’s new album voyage is the band’s first new album in forty years. It features mostly new songs, like ‘I have faith in you’ and ‘Don’t shut me down’, combined with old hits from Abba’s earlier albums. Although some of the new songs have the timeless feel of an Abba classic, the rest of the album lacks the creative and experimental feel that Abba classics have. The album is listenable and slightly catchy, but not on par with their previous albums.

The Swedish band returns after 40 years with a brand-new album and a tour in London with ticket costs varying between 42 and 316 pounds. News of the upcoming album and corresponding tour had increased the fans’ hype and expectations for the 10-track studio album boosting a solar eclipse on the front. A big contradiction lived under the fans before its release: high-hopes for a new Abba album, but at the same time feelings of caution and fear reigned supreme. Would the now aged band members be able to deliver another stand-out album or would the band not be able to deliver due to the magnitude of its previous success?

Traces of Abba’s former glory remain…
The fans fearing that lead vocalists Agnetha and Anni-Fred would have lost some of their vocal prowess, can rest assured: the pleasing harmonies and strong voices are still there with a slight deterioration in vocal range. Agnetha and Anni-Fred sing the lead in every new song on the album. The band’s characteristic great song-writing and bubbly pop style also remain in this album.

The three singles released prior to the album: ‘I still have faith in you’, ‘Don’t shut me down’ and ‘Just a notion’ are the best songs on the album. Particularly ‘Don’t shut me down’ reminds me of a typical timeless classic, like ‘Mamma Mia’. This song later became Abba’s first top ten song in the music charts since 1981. ‘Just a notion’ showcases the album’s best piece of song-writing coupled with an upbeat tempo and simple, but emotional lyrics.

… but the album does not surprise or impress the listener
Sadly enough the three early releases are not exemplary for the rest of the album. ‘I can be that woman’, one of the slowest tracks on the album, is a great lyrical ballad, but is rather misogynistic. The band’s lyricists Björn Ulvaeus and Benny Andersson are known to portray women in their lyrics as fraught and desperate for a man to fix their problems, which is also the case with ‘I can be that woman’. Anno 2021, with the rise of feminism, a woman has grown more independent and this message no longer resonates with a big part of the female population.

The album does not give the experimental or creative feel that marks the essence of Abba music. Ulvaeus mentioned in an interview with World Exclusive that the album has been written with no attention to current trends, and that absolutely shows in the songs ‘Bumblebee’ and ‘Little things’. ‘Bumblebee’ is a failed attempt at describing the current climate change situation and ‘Little things’, the obligatory Christmas track on the album, is mellow, unchallenging and generic.

Stuck in time
Abba does not embarrass themselves with their new album, but Voyage does disappoint. Having said that, Abba is able to produce better pop music than 90 percent of all the pop songs currently released, because the album offers good song-writing, upbeat tempos and catchy lyrics, which is often not the case with the current pop music.  But the album is definitely not on par with their best albums, like The visitors, Abba’s last album from 1981. Abba fails to offer ingenuity and surprise with their songs. One of the reasons could be that the lyricists are not familiar with the current musical trends and were therefore unable to revolutionize or excel with their new album, like they did for so many years forty, fifty years ago.