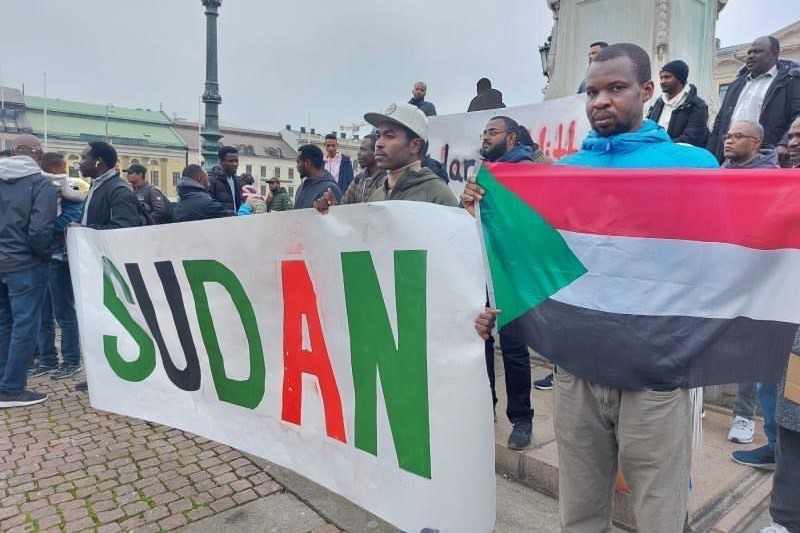 ‘I am frustrated’, is the first thing that Mohamed Abdelmageed (32), a Sudanese living in Sweden, said when I asked him about the situation in Sudan, his motherland. We met in Sweden during my exchange. ‘We started to have some form of progression towards a civilian-led government, but due to the military coup, we have taken a huge step back’.

On the 25th of October, the Sudanese military, led by General Abdel Fattah al-Burhan, took control of the government in a military coup. Two years after the Sudanese revolution, the military was supposed to handle the power of the civilians, but instead of that, they started to create problems all over the country. Military forces arrested Prime Minister Abdallah Hamdok, leaders of political parties, lawyers, activists, journalists,… because they refused to support the coup and called for Sudanese to resist against it and defend their revolution. They were brought to secret locations, without access to their families or anyone else.

Metrics show the shutdown is ongoing despite yesterday’s court order for restoration of access. Only the eight plaintiffs were reconnected, per reports.

Since the coup, Sudan has also been experiencing an internet blackout. The military is blocking access to the internet and disrupting telecommunications. The blackout is preventing communication between many Sudanese abroad, like Mohamed, and their loved ones. ‘The last time I was able to contact my family was a week ago. I can make some international calls from time to time as some landlines are available, but I mainly rely on broadband and mobile communication.’

Mohamed has lived in Sweden for three years now. He finished his master’s degree at Jönköping University and recently got a part-time job. He still has close ties with his motherland, Sudan. ‘Every hour I try to check if there’s any update on the situation. Since there is still no internet access, I get the news from secret locations where locals are uploading videos. Al Jazeera is a secured media outlet, but some activists know how to log in and give updates. I still have my friends from my old company in Sudan who try to send me videos of the shootings and the protest marches every time they have a phone connection. Luckily everyone that I know is safe. They are withstanding and do not give up. They have a strong spirit and are willing to fight till the end.’

Every week, there are marches all over the country. People don’t go to work out of protest. They even block the streets so no one can pass. ‘The Sudanese population knows the dangers of those marches’, says Mohamed. ‘They know they can get shot in the head by the military and die. But they rather die than live under the rules of the military.’

During the latest protest on the 13th of November in Khartoum and its twin city Omdurman, at least six people were killed. Five of them got shot and one died due to suffocation from tear gas. Several other protesters got injured by fire. These deaths have brought the death toll of protestors to at least nineteen since the 25th of October, all due to excessive force by the country’s security troops.

Up until now, the military coup hasn’t been officially recognized. That is why people all over the world are coming together on the streets. They hope that the European Union and the United Nations will apply more pressure to stop the violation of human rights and the assassination of young people in Sudan.

‘Last week there was a gathering in Gothenburg and Stockholm. I went to the one of Gothenburg with another Sudanese friend who lives in Sweden. We were with around 200 people. I’ve heard in Stockholm that they were with 2.000. We try to help as much as possible. We’re sending medication to Sudan because a lot of people are heavily injured and they don’t have the right medication. We also started fundraising. With the money, we want to transfer victims to Germany for instance. Some people are badly injured and they need to be operated on. But in Sudan, health care is not that good. With the money that got collected earlier, they provided artificial limbs for people who lost theirs during the civil war.’

‘We appreciate what the world, and especially the European Union, is doing already. We still need more coverage about what is happening. The world needs to see how brave the people are and need to see the effort they are doing to save the democracy. The country is very fragile since we’ve been having conflicts for over 30 years. That’s why we need support when it comes to infrastructure. We need more financial aid to pay for education, to (re)build schools, and to be able to provide health care. These things will help to stabilize the country. Sudan is a big country and has a strategic location. If a civil war will start again, it will affect the whole African continent and the Middle East.’

Sudan in the last 30 years
To understand the current military coup in Sudan, the outline below provides a brief summary of Sudan’s past revolutions: