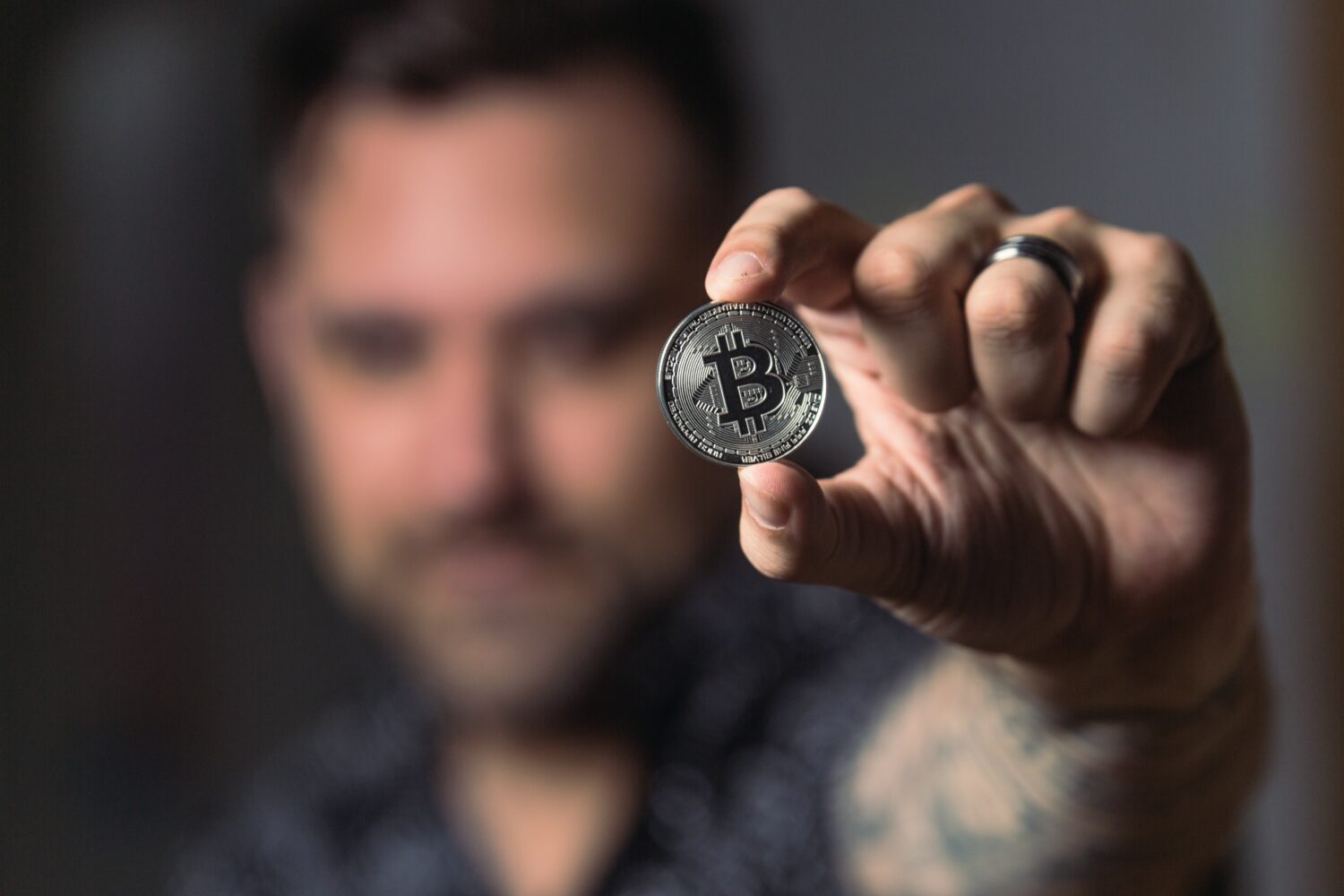 Bitcoin and other cryptocurrencies are becoming increasingly accepted as a mainstream investment vehicle. The biggest believers even dream of a world where Bitcoin might one day replace cash altogether. But what exactly is Bitcoin and why should you care? In this article, we will explore everything you need to know about the so-called ‘digital gold’.

In simple terms, Bitcoin is just digital money. But what makes Bitcoin and other cryptocurrencies unique is that users do not need to rely on institutions such as banks to keep track of their transactions and account balance. With traditional money, banks are a necessity. Only these institutes can keep track of how much money everybody has, which is especially important in a world where only a tiny fragment of money actually exists in physical form. The bank essentially acts as a ledger that keeps track of all the money that people own, spend, withdraw and so forth.

But this ancient institution comes with a set of problems, the main one being that everybody is reliant on a third party for all their monetary needs. Banks also have a large number of expenses. They need to pay the rent on their buildings, their numerous employees and sometimes they need to be bailed out by their respective governments after their own fuck-ups. As such, it is no surprise that Bitcoin first saw the light in early 2009, right after a global financial crisis had gripped markets around the world. Bitcoin’s creator Satoshi Nakamoto heavily implies that the crisis was the principal reason for creating a new form of decentralized currency, unburdened by unnecessary middlemen.

Origins
But why did nobody think of creating a digital currency before all of this happened? (Although American computer scientist Nick Szabo came up with a digital currency called ‘Bit Gold’ in the late 90’s. Szabo is thought by many to be Nakamoto himself, although this remains unproved.) It all comes down to what is called the double spend problem. Digital currency is essentially just a file on a computer (that includes most money tracked by banks) and can therefore be easily copied and pasted. This would, in theory at least, enable ne’er-do-wells to easily counterfeit money. Banks solve this issue by keeping track of every single transaction in their ledger, thereby ensuring that no money gets used twice.

Bitcoin approaches this problem in a novel way. All transactions and account balances on the Bitcoin network, the so-called blockchain, are fully visible to the public. The only thing that stays hidden is the users’ personal information. This way, Bitcoin users stop relying on expensive third parties to validate transactions. On top of that, users do not need to give their personal information to a bank, granting them more anonymity. But how does all of this work?

The blockchain
Transactions on the Bitcoin network work so well because every single user on the network essentially owns a copy of all Bitcoin transactions that have ever been made in what is called the blockchain. Let’s take a step back and try to figure out what this all means through a very convoluted analogy.

Imagine a room full of inmates at a prison. The inmates, being criminals, obviously do not trust each other, but they all wish to exchange goods such as cigarettes, snacks and other things in their own little prison economy. Because they cannot trust one another to keep track of all their transactions, these inmates have come up with an ingenious solution. Every time an inmate spends some money, ALL inmates have to tattoo a record of that transaction on their bodies. Afterwards, the inmates compare their tattoos. If all the tattoos match, the inmates approve the transaction. If, however, one inmate’s tattoo does not, it means that someone has been lying (probably the inmate with the differing tattoo) and the transaction gets rejected.

This is essentially how the blockchain works. Instead of inmates, you deal with complete strangers that you have no reason to trust. To make sure that transactions on the Bitcoin network are legitimate, a permanent record of every single transaction gets added to every single user’s copy of the blockchain. That way, if one of the copies doesn’t match, the network will reject the transaction automatically. This way it becomes impossible to counterfeit Bitcoins, as every copy on the network is essentially a permanent record of all transactions that have ever been made. Because of this, every user holds a record of which Bitcoin belongs to who. The network that keeps track of and compares users’ records to make sure they all match is what we call the blockchain.

Why you should care
Because of blockchain technology, complete strangers are able to send and receive money without having to rely on a bank or other third party to keep track of their transactions. Banks and other financial institutions are what we call centralized, meaning that they hold top-down control over the financial network. What makes Bitcoin so revolutionary is that it is not the institutions that control the network, but the community of users themselves. There are a number of benefits that arise from this so-called decentralization.

First of all, a decentralized financial system theoretically enables users to bypass all the headaches that come with dealing with a bank. However, apps for buying and selling cryptocurrencies are still very bare-bones. Money can be sent and received quicker, your account cannot be closed, your transactions cannot be denied and much more. What’s even better is that everyone in the world with an internet connection can participate, unlike traditional banks. According to a report by the World Bank Group, around 1,7 billion people globally do not have access to a bank account. Unbanked people cite a lack of money to open an account and a lack of necessary documentation among the reasons for not being able to open an account.

To make things even more dire: contrary to popular belief, you don’t actually own the fiat money, central bank currencies such as the Euro, in your bank account. Fiat relies on a shaky system of debt and credit. According to ‘Bitcoin maximalists’ (investors who believe Bitcoin will eventually replace fiat) users of the cryptocurrency retain full ownership of their coins. This creates more value for Bitcoin on its own.

Secondly, Bitcoin has a limited supply, unlike traditional money. Governments around the world keep printing new money which decreases its value over time in a process called inflation. Bitcoin solves that problem by putting a hard cap on the total amount of Bitcoin that can be created. Due to the way Bitcoin works, there can never be more than 21 million Bitcoins. This way, Bitcoin will never be subject to inflation and will actually increase in price over time.

Bitcoin’s third major benefit is its divisibility. Traditional money can only be divided by one hundred in most cases (think Eurocents). Bitcoin, however, can be divided into much smaller parts called Satoshis. One Satoshi is one-hundred-millionth of a Bitcoin. That way, Bitcoin can theoretically be used for even the smallest of purchases, such as a piece of gum.

Another huge benefit Bitcoin enjoys is security. Due to its use of cryptography to secure information on the blockchain, the Bitcoin network can never be hacked. Cryptography is a technology that prevents third parties from accessing information by using advanced mathematical functions. That is also where the name cryptocurrency comes from. Due to the use of cryptography, Bitcoin transactions are much safer than traditional bank’s.

Bitcoin wallets
Given all these benefits, you might start wondering how you can buy and store some Bitcoin for yourself. When you buy Bitcoin, it is stored in a digital wallet. What is counterintuitive about Bitcoin wallets, however, is that your money is not actually stored inside of them. Bitcoins, as we learned earlier, are stored on the blockchain itself. A wallet merely grants you access to your bitcoins on the blockchain.

Bitcoin wallets function very similarly to traditional bank accounts. Every wallet has a distinct address that users can send Bitcoin to. Practically, this functions in the same way as a bank account. What does differ from a bank account, however, is that no personal data is needed to set up a Bitcoin wallet. The whole process is completely anonymous. The only information you need to complete a transaction is the wallet address itself, which is no more than a series of digits and letters.

How transactions work
Bitcoin transactions are very straightforward compared to traditional bank transactions. There are no middlemen, transfer fees, conversion rates or different banks. One person simply enters another person’s wallet address and the amount of Bitcoin they wish to send and press send. Once a Bitcoin has been sent, a recording of the transaction gets added to the blockchain. It is then compared to other copies of the blockchain, to ensure its authenticity. Once everything checks out, the transaction is approved by the network and the Bitcoin is on its way to its destination.

The Bitcoin network has to process a large number of these transactions. It does so by bundling all transactions in the last ten minutes together into blocks. Once a block is full, transactions get added to the next one. This sequence of blocks is where the blockchain gets its name from. But how do Bitcoin blocks get created?

Mining Bitcoin
Bundles on the blockchain get created by so-called miners. Miners essentially use computers to figure out the next block by performing a large number of calculations. As a reward, they receive Bitcoin for every block they add to the network. Miners compete with each other to do so. 18.8 million Bitcoins have been mined so far.

To make sure that the total amount of Bitcoins never exceeds 21 million, the network employs a strategy called halving. After 210.000 blocks get mined, the reward for mining is cut in half. Halving will continue until the year 2140, when all Bitcoin will have been mined. Afterwards, miners will still be able to receive a small amount of Bitcoin from transaction fees, but no new Bitcoins.

New money
In conclusion, Bitcoin is a decentralized currency that intends to revolutionize the way people understand money. It aims to eliminate unnecessary middlemen, to make payments easy and secure and to grant power over the financial system to all its users. It can never be hacked or counterfeited and it is inflation-proof. Lastly everybody with an internet connection can get in on the action, anonymously and without the hassle of traditional institutions.

If you want to learn more about Bitcoin, you can read the original white paper here.