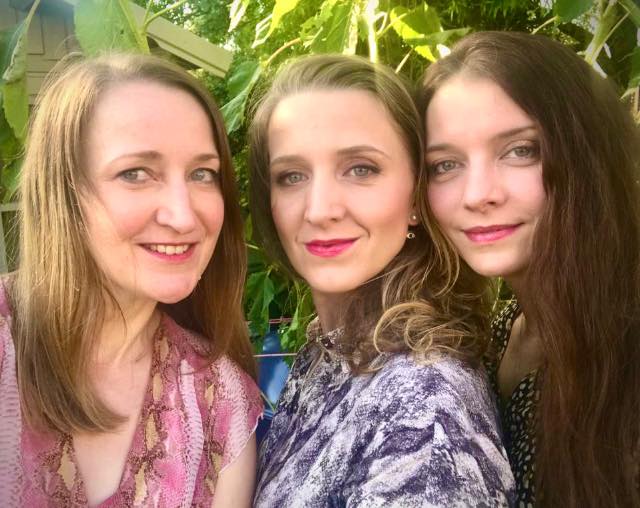 Aleksandra Gęścińska was born in the Polish town of Opole Lubelskie in 1980. The family with three daughters arrived here in Belgium in 1988. There was a huge influx of foreigners at the time. They stayed for a while in Brussels at Klein-Kasteeltje: ‘We stayed at Klein-Kasteeltje the first 3 months but it felt much longer. After that we very quickly found something in Lede and lived there for 20 years. our family home was only sold this summer.’

‘All my family still lives in Poland. We were the only ones who migrated here to escape communism. I think that what happened then in Eastern Europe was played out completely differently in the history books. There was no communication and certainly no internet, but it was also very secluded. My parents were not allowed to travel with their children, for example. My father was allowed to go with my mother, we were allowed to go separately, but we were never allowed to travel together. My father regularly went to different countries to show that we like to travel and just to have that stamp of approval that we are coming back. That way, we managed to escape with the five of us. The idea was always to leave Poland forever.

I left when I was 8. When I was 16, I was a Belgian and I was allowed to return to Poland for the first time.  Once you are a Belgian, they can’t do anything. Before that, we were afraid that if we returned, we would be stuck there and be punished. Once, we did have a phone call to say that we were not returning and were safe in Belgium. Our family was not allowed to know either, there was a kind of state domination. People could betray you. Communism started to fail, the ideology became more and more permeable and people were simply picked up in the streets. My father didn’t drink but he was arrested and interrogated in the street because he stayed out too late, there was a curfew.

When people talk about lockdown now, I think about how our freedom was much more restricted then than it is now. Even compared to the worst lockdown we had this year. Certain things were not allowed. When we went to buy food, shelves were empty. We got food coupons because there was rationing. Everything was weighed and measured. I found it strange to see my mother paying with receipts and money. Why both? That is strange. The government really wanted to restrict. It wasn’t if you had more money that you could buy what you wanted. The shelves were always empty.

Poles are really against homosexuality. My uncle is a priest, and they have an idea about homosexuality that it is a bad education or those people are sick, they just don’t get it. My mother once told me that I should not return to Poland if I turned out to be a lesbian. Even my family would reject me and not accept me. So deeply rooted. Lukashenko had made anti-gay statements, and after Europe withdrew subsidies, suddenly everything was fine again. Just because they felt the money flowing away. Hypocritical. That bothers me, it’s very different from Belgium: at least here people can be who they are.

Churches are packed, after work people go to mass with briefcases and they stand outside. There are loudspeakers so that people from outside can follow. I read that if you commit a murder in Poland you get 12 years in jail, for abortion 20. and that’s the PiS party: women at the fireplace and women are not allowed to have an abortion.  There is a great conservatism. The church has far too much power. Radio stations preach the word of God in a kind of political tint, and many priests that people look up to, a kind of status symbol in Poland, say very political things. If a priest here praised a political party, it would be a big scandal. In Poland, it is normal. Democracy is always a little screwed up. I do think Poland has a lot of Russian influences in that area.

My parents were not really convinced, but we always went to church, we went to a Catholic school, but that was more out of culture than conviction.  My mother lives in Belgium, but she also has a house on the Belarusian border. She is now a widow and is together with a divorced man. Being unmarried is actually not done in Poland, they are not the standard followers so they don’t really go to church. They met when my mother happened to be there to arrange my father’s paperwork. Meanwhile, they have been together for 8 years and they have fixed up a house together. She returned to Poland and has a second home there because she found love.

I have dual nationality, but no papers in Poland. I have lived here all my life and I have no need for it. I don’t see what the bonus would be if I had a Polish passport. I am Belgian, but I used to be Polish, done.’