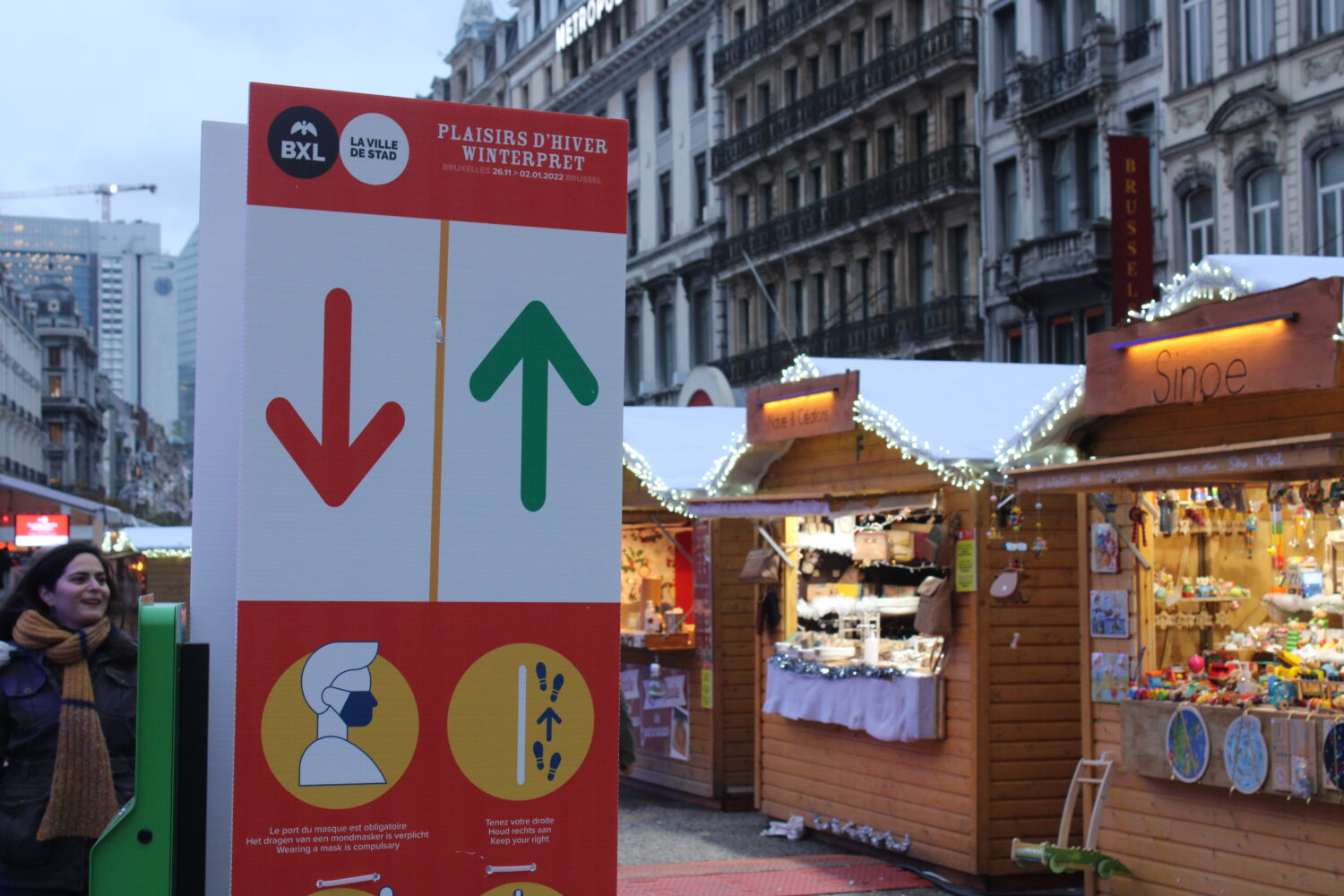 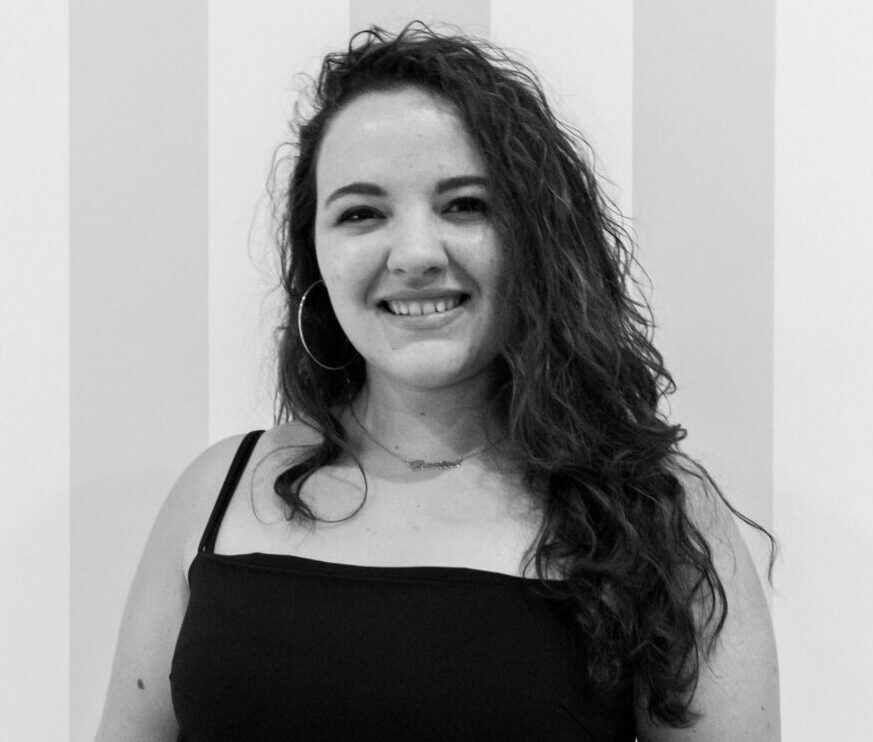 Covid’s second holiday season has come, and this year no one seems sure of how to deal with its prolonged stay. How different EU countries planned their Christmas markets was a clear sign of the uncertainty regarding the virus. Despite being mere hours from one another, Belgium, France and Germany were worlds apart this festive season.

Besides needing to prove you have a CST (Covid Safe Ticket) in order to receive an all access pass to the market, Brussels tried to keep this Christmas season as normal as possible. Throughout the city, festive stalls were displayed, lights greeted visitors in every street and the ice rink was open to all who had the pass and a mask. The sound and light show in the Grand Place was a true gift to all, as no one went around asking spectators to show their CSBs (Covid Safe Bracelets). 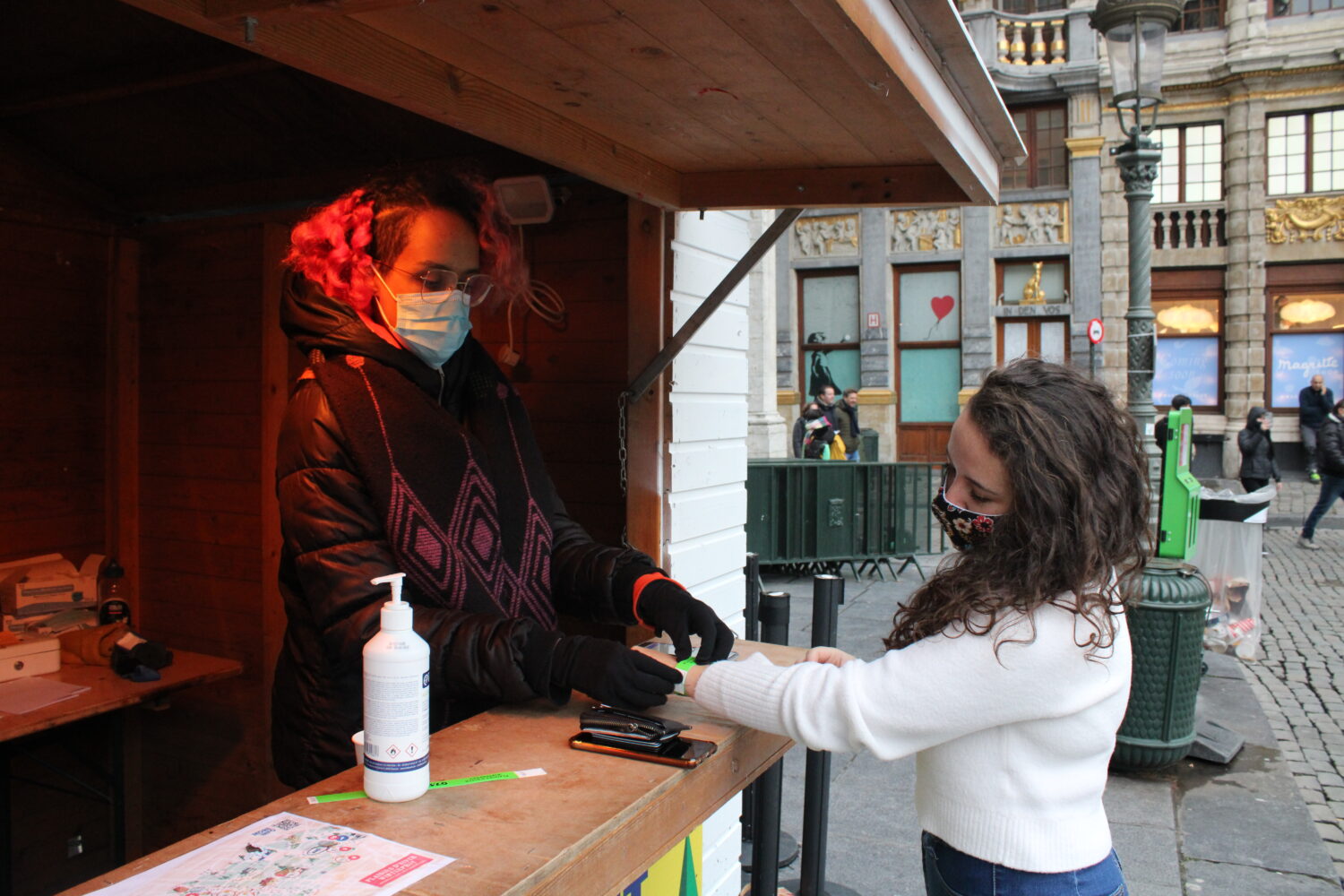 Besides a CSB and a face mask, visitors were free to roam the streets of Brussels and to explore its many stalls and activities.

The area around Brussels’ Royal Theatre La Monnaie was littered with stalls, lights and even an ice-skating rink. Even though having a CSB was mandatory, most stall-owners did not seem to care. Visitors were allowed to roam free, almost as if Covid did not exist. Crowds quickly formed and any semblance of social distancing went out the window as shots of Jenever and cups of mulled wine were consumed. The ice-skating rink made keeping a distance impossible as well. Eager participants quickly piled up in the narrow corridors and bottlenecked on the ice itself. 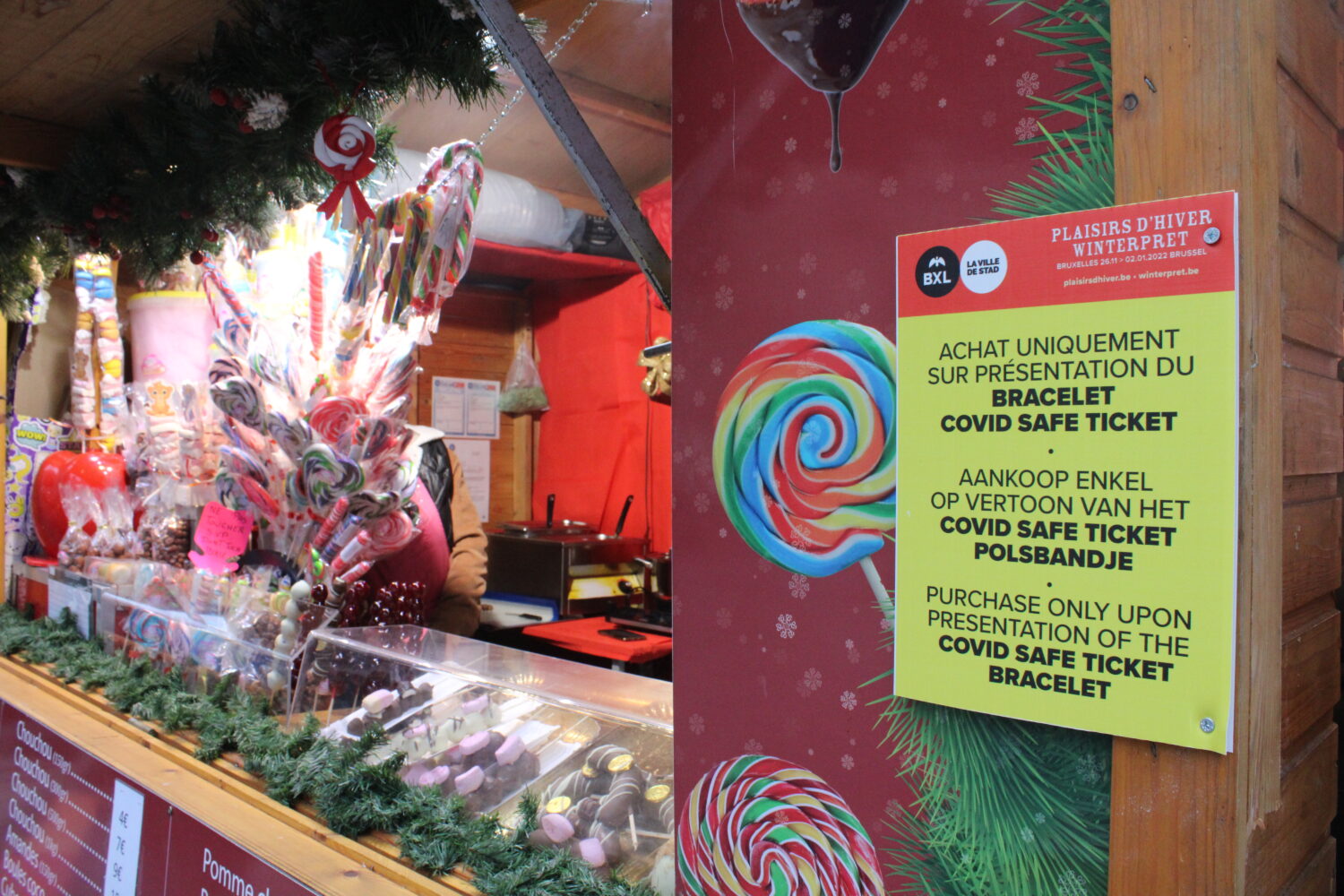 Visitors wanting to purchase goods from the stalls are obliged to show their CSBs. 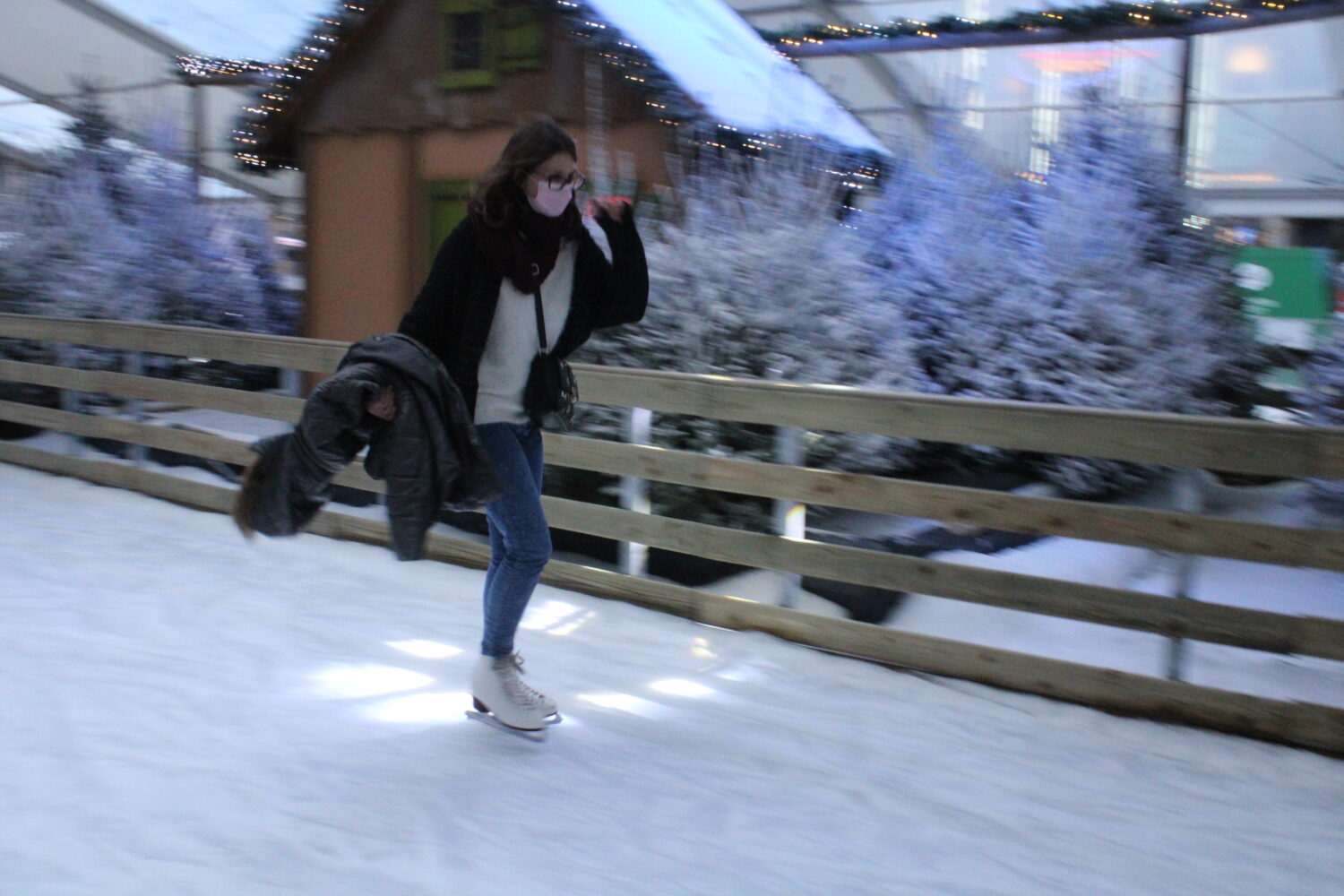 An extra layer of warmth is provided by the obliged mask.

Not all countries agreed with this approach. Countries such as France and Germany each had their own set of stricter regulations compared to Belgium.

Trouble in Troyes
Some European cities, such as Troyes in France, found a middle ground that allowed people to still enjoy the festivities in a safe way. Although this year’s market was much more limited in scope, the small size and heavy restrictions in place have ensured the market’s survival.

In previous years, dozens of stalls littered the various squares of the city, selling everything from African food to Eastern European liquor. This year, however, visitors to Troyes’ Christmas market had to make do with a handful of stalls and a couple of decorations on the city’s main square. 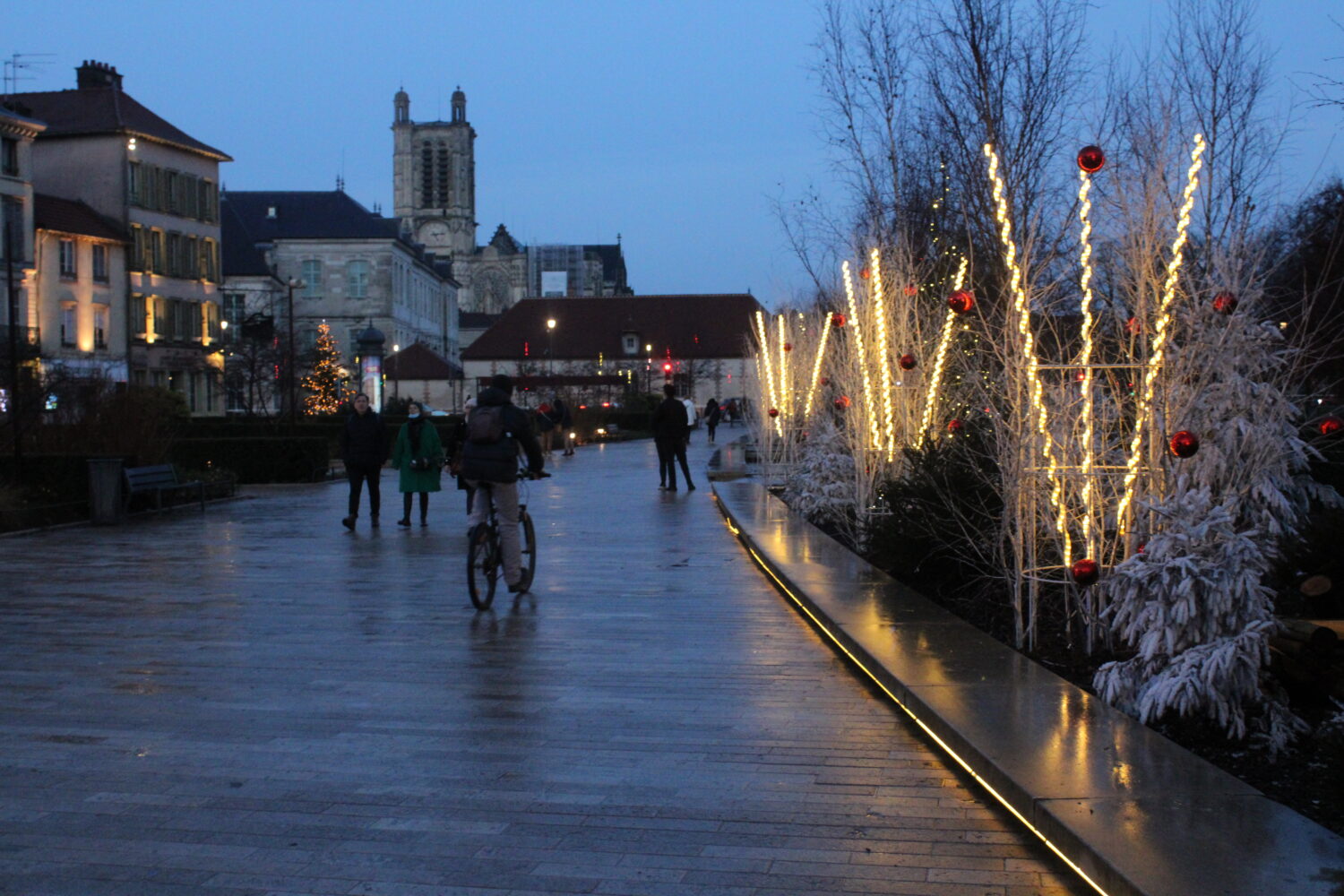 This square in Troyes is usually filled to the brim with stalls.

Although the festive mood is still there somewhat, the lack of rows upon rows of wooden booths, coupled with the ubiquitous signs reminding visitors to put on their facemasks, makes for a much gloomier market than usual. However, the restrictions have not dissuaded Troyes’ citizens. Despite the limited scope of this year’s market, Troyes’ central square quickly filled up with curious visitors. 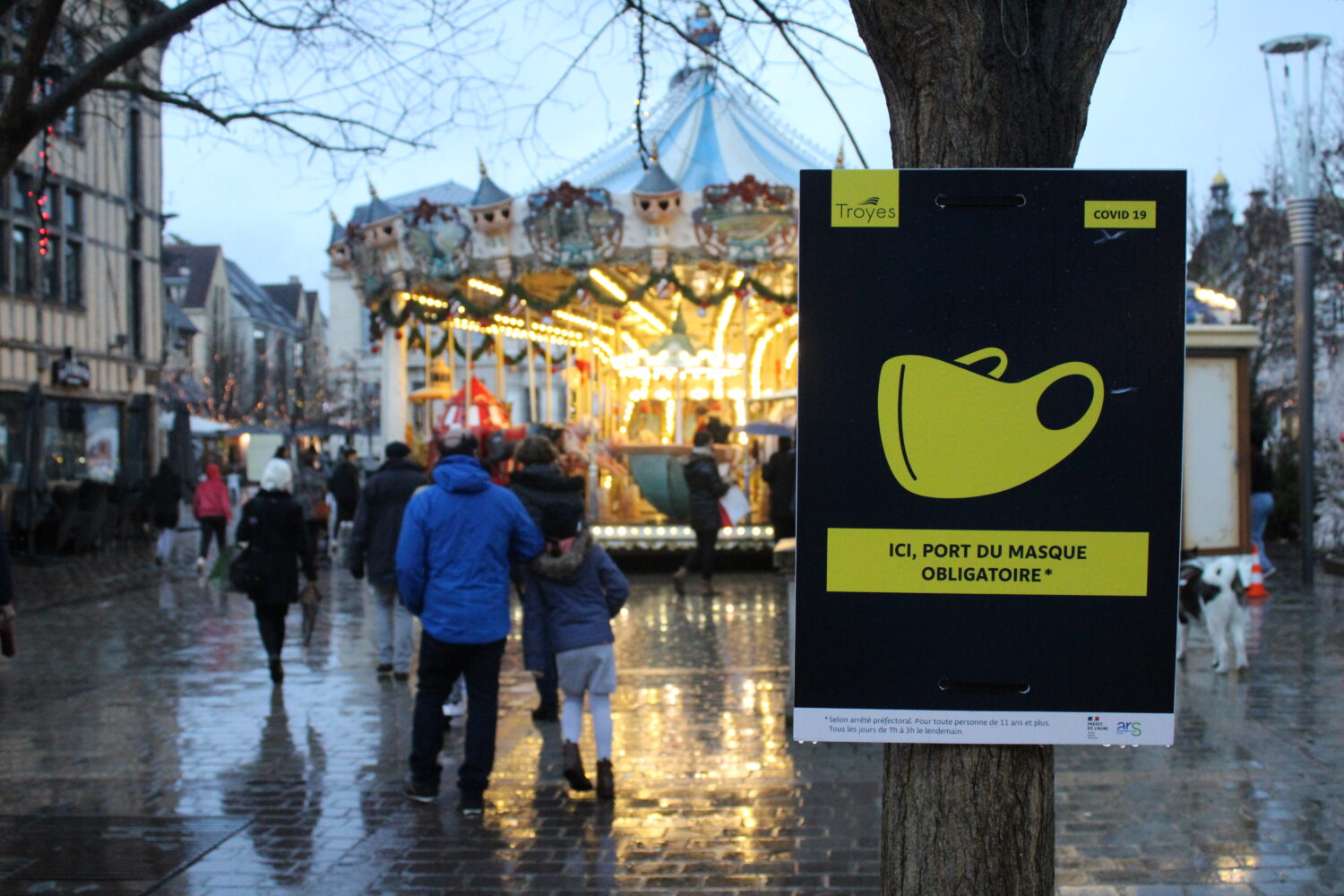 Troyes’ denizens making the best out of a grim holiday season.

Undoubtedly, the crowds would have been bigger should the spectre of Covid not have haunted this year’s celebrations. Besides the obligatory face masks, visitors weren’t allowed to consume anything on the spot. This measure, obviously intended to keep people moving and to prevent big crowds from forming, seemed to be effective, as most visitors passed through the market rather quickly.

All of these measures combined with a lack of stalls contributed to the stern atmosphere that was omnipresent throughout the square. Unlike Brussels’ edition, where smiles and optimism seemed to be the norm, Troyes’ Christmas market felt more like a token gesture to remind people that Christmas still exists. 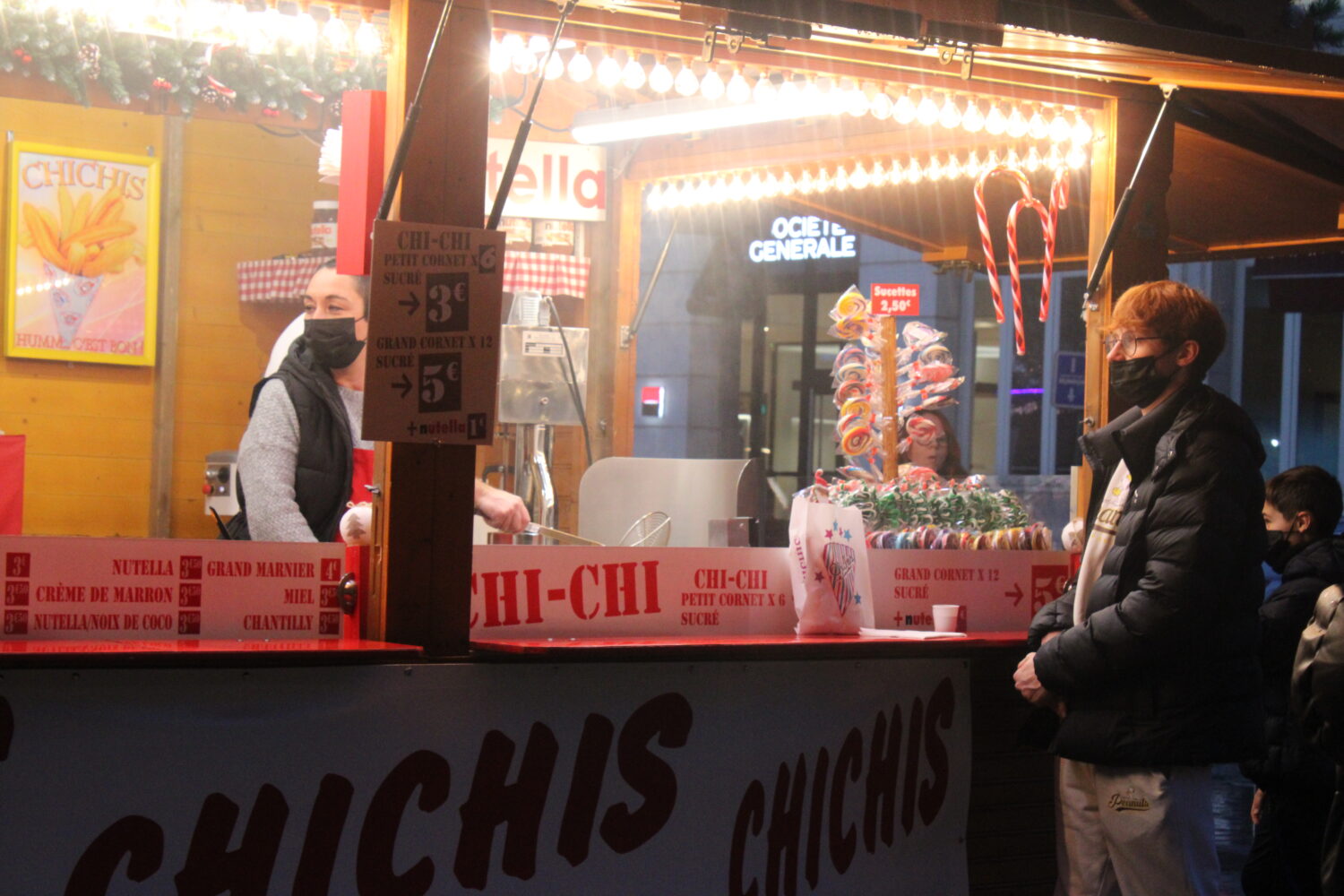 The measures appear to be working as stalls remain unobstructed.

An empty Esslingen
In Germany, almost all activities are limited to having a CST, including public transport and shopping centres. However, not even the vaccinated got to enjoy a Christmas market this year as these were all cancelled with the implementation of new and stricter Covid measures.

A walk through the town of Esslingen showed signs of what was supposed to be a merry Christmas market before the restrictions tightened. From the empty Main Square to the giant Christmas tree without any decorations or lights, it is safe to say it has been the least-festive festive season this town has seen in a while. 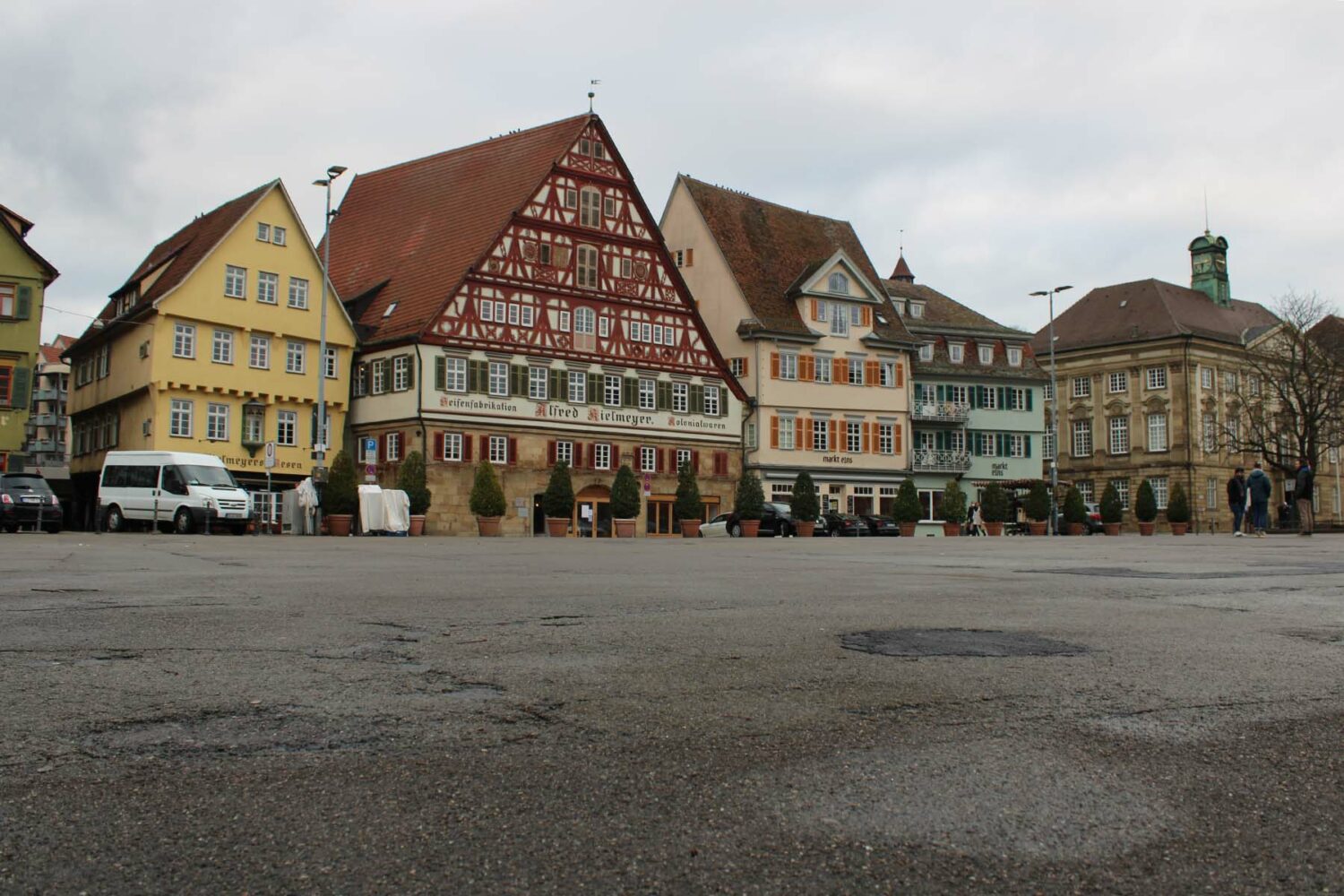 Visitors can barely tell that it’s Christmas season in Esslingen. The only hints are the festival fences hidden under a white canvas and a few unlit Christmas trees. 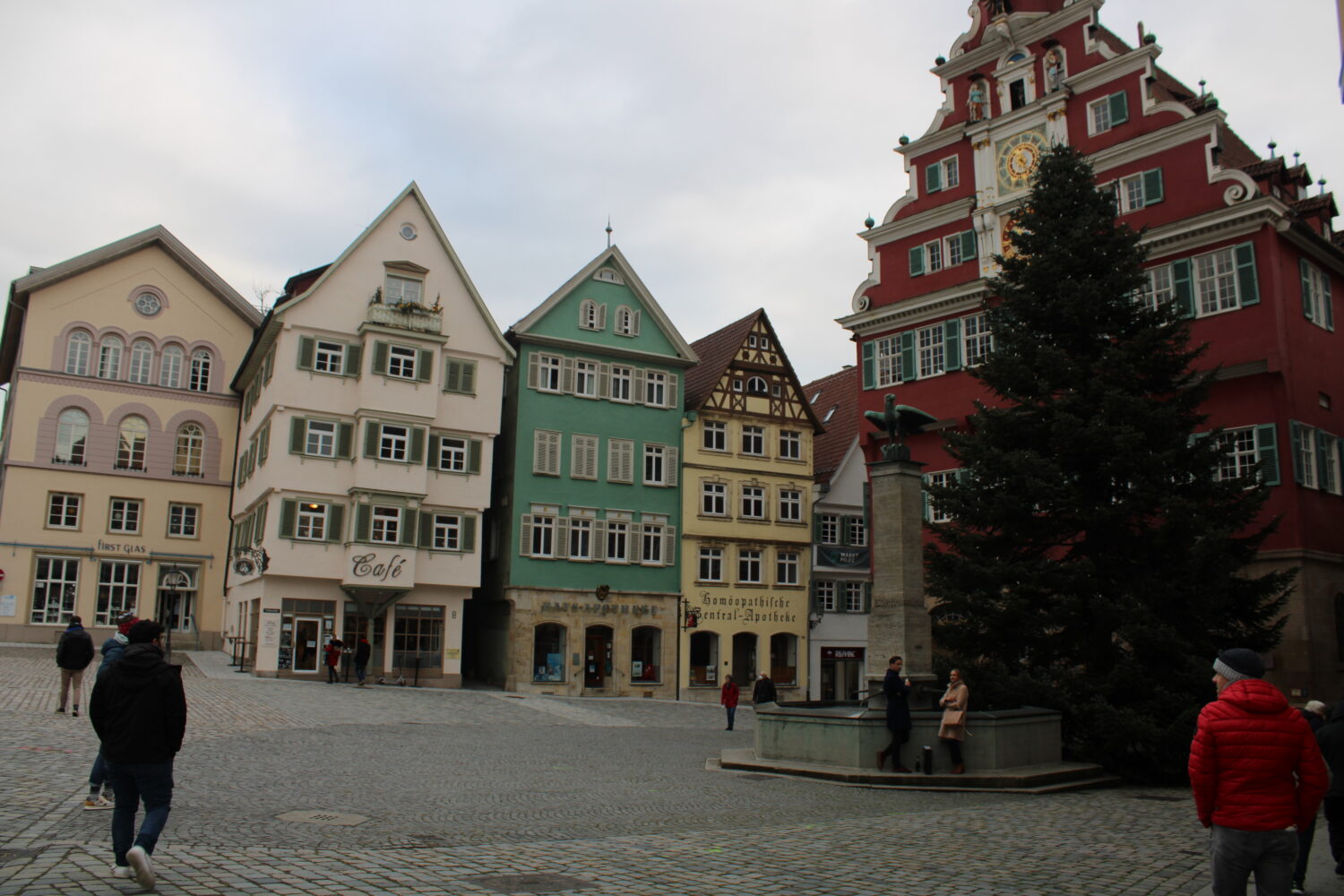 A bare-bones Christmas tree is the only decoration on the main square.

However, five festive stalls remained standing throughout the town. When asked how it came to be that they were allowed to be there, the owner of one stall explained the situation. When Germany cancelled the markets, the marketing team of Esslingen came together to discuss what an alternative would be to still attract people. They then asked the community who would be willing to come and five organisations with Christmas stands came forward. These five stands were set up and spread throughout the city, simultaneously adding to the festive feeling of Christmas and the empty feeling of cancelled Christmas markets. 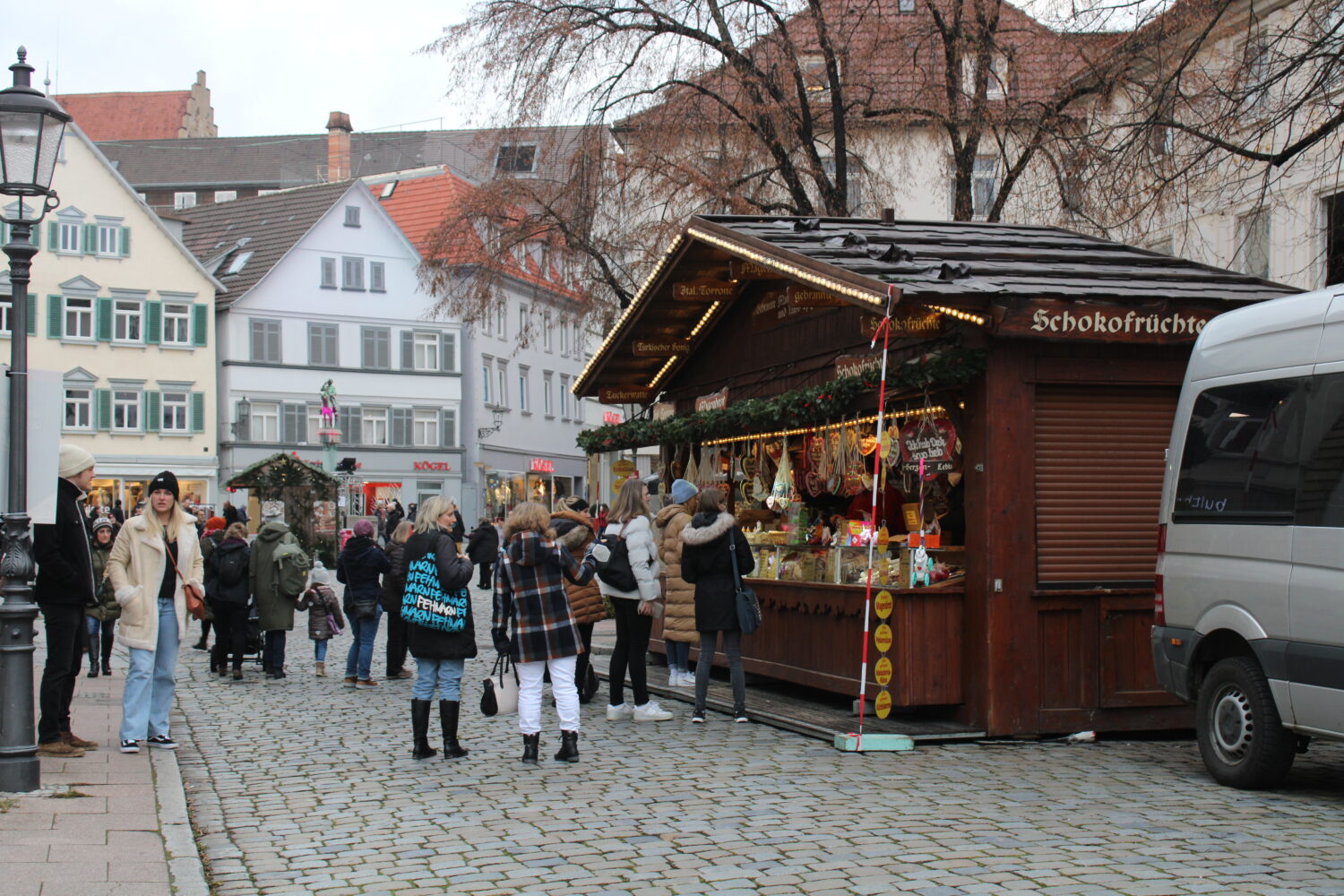 Two of the five stalls throughout the town, with a lot of distance between them yet still gathering a merry crowd of visitors.

Ominous Omicron
Due to the looming threat of the Omicron variant, the measures quickly changed. The Brussels market closed on the 23rd of December, with the exception of the ice rink which remains open. France is on the cusp of introducing new restrictions and Germany is further tightening its restrictions as well. At least some people got to visit Christmas markets this year. Only Omicron knows what next year holds.