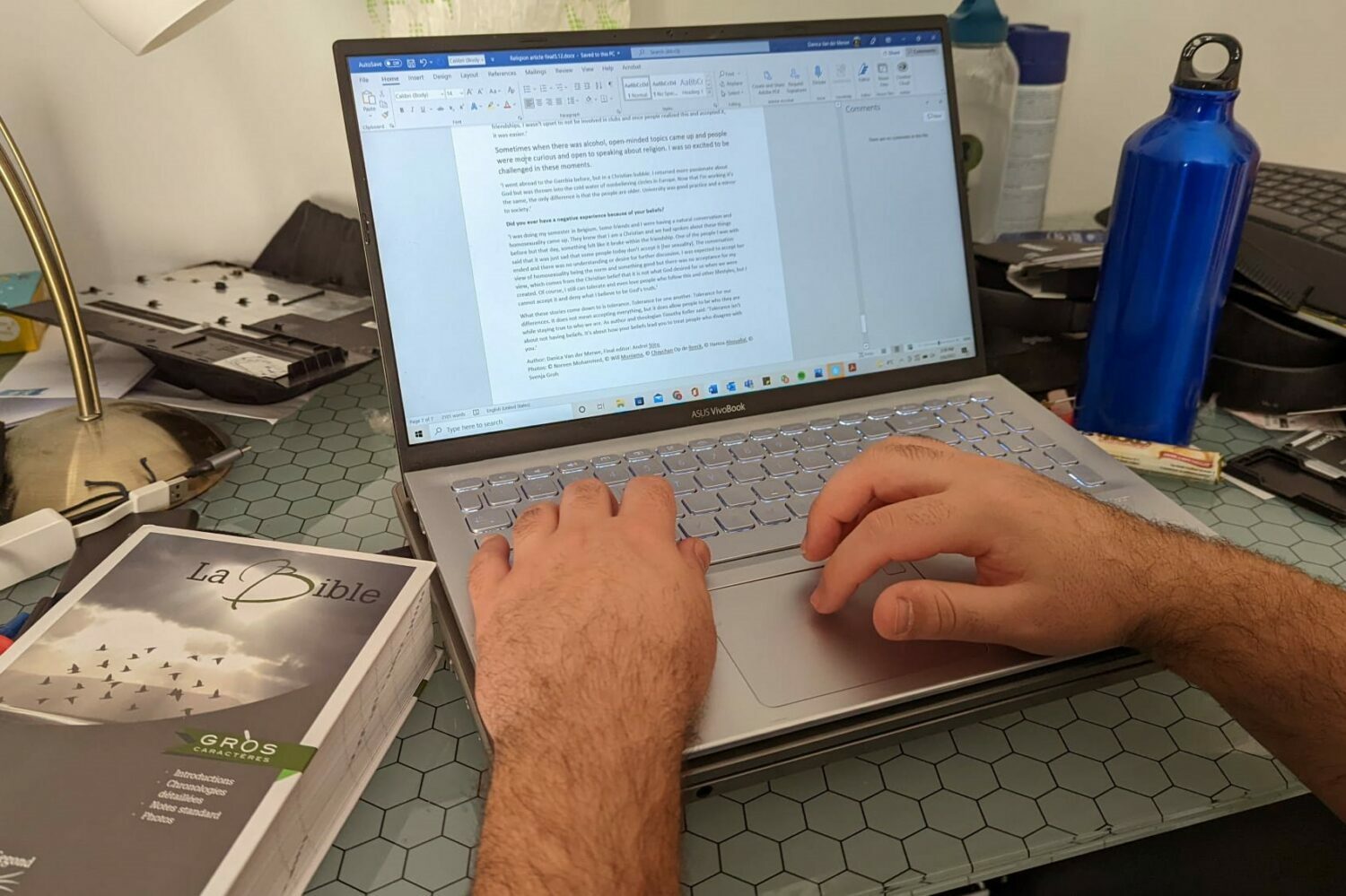 Many different people experience student life, which means it is experienced in countless ways. The following students are or have studied in Belgium and are all religious, so we wanted to know more about how their religion has impacted their lives, if at all. 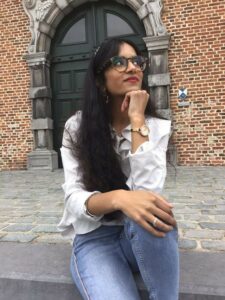 How would you describe yourself with regards to your religion?

‘I am Muslim but in my own way. I was born and brought up here in Belgium. So, I could impossibly be 100% Pakistani or Muslim. I started choosing my path as I got older. I did my research on Islam and I concluded that I do believe in God, and not only because I was raised to do so. But I am an empowered Muslim woman who has her own beliefs. I don’t drink alcohol, I don’t go out partying. But I also don’t wear the hijab or pray five times a day on my praying mat. Instead, I pray under my breath throughout the day and count it with a little clicker I keep with me.’

How has being a Muslim impacted your student life?

‘It’s been difficult but I believe if you stick to your beliefs and you keep on telling yourself that you shouldn’t get pressured by your peers, then you can do it.

For example, I eat halal food. These kinds of things play a huge role in the way you live. Drinking is a big part of the culture here in Belgium, so it can be difficult being religious. I sometimes felt like the outsider of the group who would say ‘No, I don’t want to drink. No, I can’t eat this meat because it’s not halal. No, I don’t want to go out. No, I don’t want to play the alcohol ping pong game or whatever.’ You do feel like an outsider and sometimes a burden to the group.’

Have you ever had a negative social situation because of your beliefs?

‘When I was in my first and second year of Communication, I was in a student hostel in Mechelen. Every Thursday evening, all of the housemates got together and ordered food.

I always ordered the vegetarian alternative of whatever we were eating. One time a housemate of mine asked me why I wasn’t taking the meat as there were a lot of leftovers. Another girl said not to offer it to me because I am not allowed to eat it. Her response was an ‘ugh’ followed by an eye roll.’

What do you do in these situations?

‘I try to start a dialogue with the person.

I’m Muslim. Yes, I believe in God. I believe in the Islamic rules but that does not make me an alien who has come from another planet.

They see my religion as oppressed women with headscarves and no sex before marriage or no drinking alcohol and being terrorists. But, for me, religion is something in my heart because whenever I feel desperate, hopeless or negative. Then I remember God has better plans for me. He is making me go through these trials to make me stronger. Everything happens for a good reason, and this is what keeps me going on in life.’ 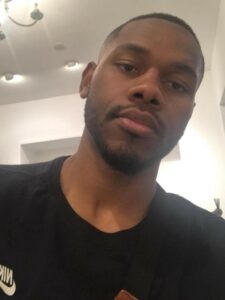 ‘Thank you for this interview, it’s rare for people to ask about this.’

How would you identify yourself with regards to religion?

‘I am a reformed Christian and I actively practise it. I’ve been a Christian since I was born as my great grandfather was a pastor. Then my grandmother was super religious which she passed to my mom.’

How has being religious impacted your life?

‘It had a big impact on my life as it brought me some values. I could tell that it shaped the way I was viewing the world. Not in a bad way, but I felt like it was also closing my mind about people in a way. For example, I felt like dating a non-Christian girl would be super hard or weird because she wouldn’t share my values. This was not true. I can tell my girlfriend has a lot of values even if she doesn’t share my religion. But I would still say my religion has had a bigger positive than negative effect on my life.’

How was your experience as a religious student?

‘In high school, it was hard as I was surrounded by Muslims. We had debate after debate, they kept trying to pull me to be a Muslim. In university, it was a whole other world. I saw the world as it was. There were a lot of temptations but when you walk by faith then all of that stuff can’t touch you. I was trying my best not to fall into it and I think I did well.

I also had a lot of negative experiences though. First of all, as I said before, the Muslims I knew didn’t want to hear about Jesus being God. So there were a lot of debates and some could be rude at times. I also had teachers who were rude about it. Many who didn’t believe and were calling us dumb for being religious. At the end of the day, people will believe what they want. They just don’t need to be rude about it. We forgive them though.’

Did you ever feel like you needed to change who you were in school?

‘As a Christian student, I think it’s hard to stay the same as when you first get to university. You see so many people from so many different backgrounds. You open yourself to the world and you start seeing some things differently. You don’t necessarily put your values aside but you do try to compromise.

I was seeing these different people that I had stereotypes about and I wiped them away, which the Bible speaks about. We shouldn’t judge people. You either see them and judge them because you think differently or you change the way you perceive them. Personally, I changed the way I perceived certain people and I think it did me good.’

I can still touch people with the Word of God while not judging them. 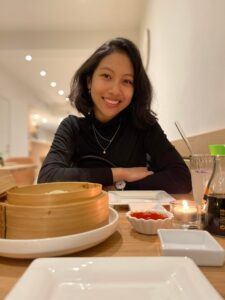 With which religion do you identify?

‘I identify with Buddhism.’

How long have you been religious?

‘I got baptised when I was just a few days old, so I guess since then. And growing up, I learned the traditions from my family and school.’

What impact has it had on your life?

So in “this life” we try to behave as good as possible so we can return as humans in the next.

‘I guess the biggest impact for me is that Buddhists are strong believers in the afterlife and reincarnation. We believe that in our previous life, we must have been good people for us to be born as humans.’

How did you experience life as a student with your religious beliefs and values?

‘I’m not sure whether my religious beliefs and values had an influence on my life as a student. These beliefs and values are personal and have an overall impact on my day to day life and my way of thinking and doing. However, it did not help me study or make me become a good student but it did help me stay true to myself. I haven’t really had any experiences that were negative because of being Buddhist.’ 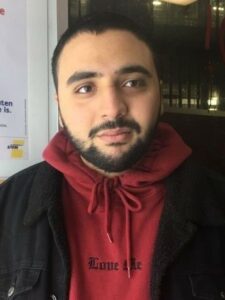 With which religion do you identify?

‘I identify as a Sunnit Muslim.’

What impact has it had on your life?

‘It had a positive and negative impact.

A positive one because I am a proud Muslim. It makes me feel more peaceful. Being a Muslim, you have to respect other cultures, people and nature. That’s why I’m a pacifist and why I’m against violence.

The negative impact that it had is more because of the extremist groups and what the media shows. Sometimes when I go on the street or when I go to school I get a lot of bad reactions for being a Muslim.

I live in a Western society and I would love to be treated normally like everybody else.

Did you ever experience a negative situation regarding your religion while studying?

‘At one school, my nickname was Taliban and bomb and even the teachers laughed at me and said that I’m a time bomb.

There was also a situation with a teacher at Thomas More. I don’t think he meant it wrong but I thought it was weird for him to say. He said, ‘I’m amazed how intelligent you are and how far you got, Hamza.’ And I wondered why was he amazed that I was intelligent. I was just like every other student there. I don’t think he meant it bad but it’s not something you should say.

So yeah, school-wise, it’s not that bad apart from the comments sometimes. But if you have to find a job or internship, then the struggle really starts.’ 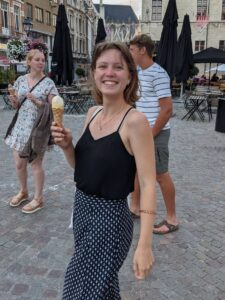 Which religion do you identify with?

‘I am a Christian, more specifically Protestant.’

How has being a Christian had an impact on your life as a student?

‘My university was very liberal, which is good as it helped me to understand different people more but it was difficult at times to go there and support values that I do not completely agree with. But I knew my values before going I didn’t need the university to tell me what values to have.

Then there is the typical student life, which was not something I wanted to be a part of. I wasn’t comfortable in parties and clubs and rather enjoyed house parties where I could build more friendships. I wasn’t upset to not be involved in clubs and once people realized this and accepted it, it was easier.’

Sometimes when there was alcohol, open-minded topics came up and people were more curious and open to speaking about religion. I was so excited to be challenged in these moments.

‘I went abroad to the Gambia before, but in a Christian bubble. I returned more passionate about God but was thrown into the cold water of nonbelieving circles in Europe. Now that I’m working it’s the same, the only difference is that the people are older. University was good practice and a mirror to society.’

Did you ever have a negative experience because of your beliefs?

‘I was doing my semester in Belgium. Some friends and I were having a natural conversation and homosexuality came up. They knew that I am a Christian and we had spoken about these things before but that day, something felt like it broke within the friendship. One of the people I was with said that it was just sad that some people today don’t accept it [her sexuality]. The conversation ended and there was no understanding or desire for further discussion. I was expected to accept her view of homosexuality being the norm and something good but there was no acceptance for my view, which comes from the Christian belief that it is not what God desired for us when we were created. Of course, I still can tolerate and even love people who follow this and other lifestyles, but I cannot accept it and deny what I believe to be God’s truth.’

What these stories come down to is tolerance. Tolerance for one another. Tolerance for our differences. It does not mean accepting everything, but it does allow people to be who they are while staying true to who we are. As author and theologian Timothy Keller said: ‘Tolerance isn’t about not having beliefs. It’s about how your beliefs lead you to treat people who disagree with you.’