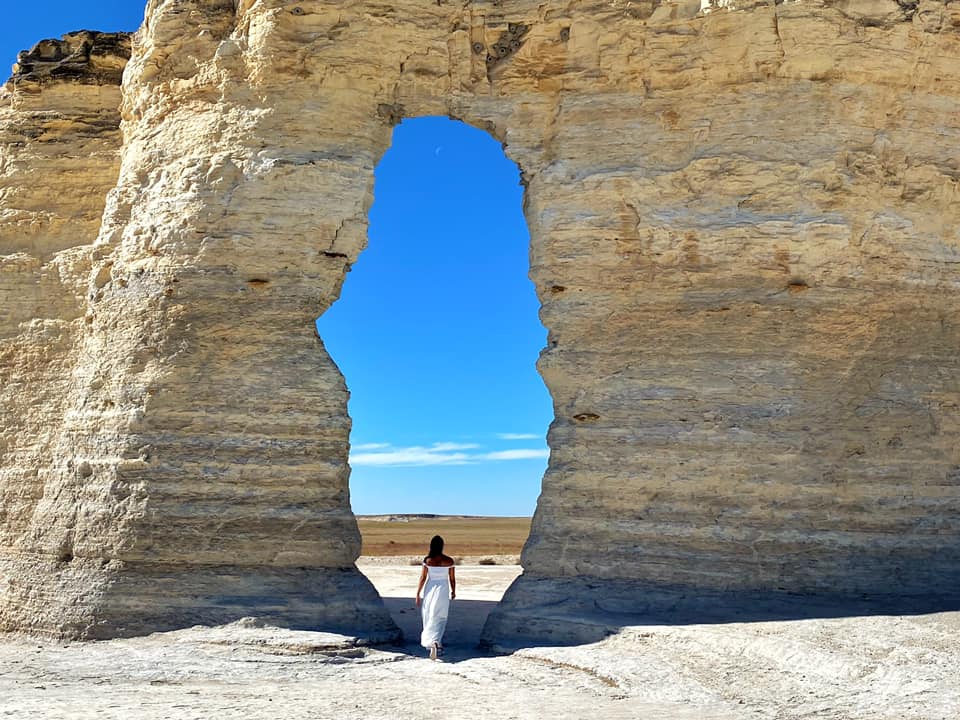 Most travel experiences happen with family, partners or friends, but some daring women go out there all by themselves. Solo travel is beneficial for female empowerment and change, be it to explore a new area or embark on an adventurous journey. Vinuthna Kante and Krishna Shah, both 25, tell us their experience and give a few tips for those who want to take the step as well.

Travelling solo is on the rise worldwide. It’s not limited to the young 20-year-olds as some might think. Women in their 30s, 40s, 50s and 60s travel the world all by themselves as well. While travellers might be navigating in different decades in life, they have one common message. Just pack your bags and go – you won’t regret it!

Vinuthna Kante is an engineer from Maryland. She recently got back from a two-month-long road trip through southwest USA. Krishna Shah will live in Toronto next year with her brother and sister-in-law and plans on being a licensed dentist. Her latest solo travel was to Doha.

How and what was your last solo travel experience?

Vinuthna: ‘I travelled through the southwest of the US all by myself. It was such a crazy experience. My original plan was to leave for a month and two weeks, but that quickly changed to two months when I added Hawaii and Mexico to my trip. The plan you start off with and what actually happens are two different things, but I’m happy I added those two stops along the way. The reason I went was because flight deals had dropped and flying from the West Coast to Hawaii is way cheaper than from Washington DC, where I’m from.’

‘Obviously, I still had to work, but I’m lucky enough to be able to work remotely. I was working the entire trip except for when I was in Hawaii. Then I decided to take a week off and really enjoy my surroundings and take it all in. It wasn’t always easy though because not every place I stayed in had WiFi, but I managed.’

Krishna: ‘It was a random plan. I was supposed to fly from Toronto directly back to India but my tickets got cancelled due to Covid-19. That’s when I decided to fly to Doha since I had a few free days. It truly was a wonderful experience. People were very friendly, helping me whenever I needed it. In some places, I wasn’t able to access WiFi, but locals immediately helped me book Ubers or showed me how to take public transport. I’ve never had an experience where I felt so safe and welcome. I also planned everything on my own, using Google and Instagram to find fun places.’

Was this your first solo trip?

Vinuthna: ‘No, I did a somewhat-solo trip in India, where I’m from. It was only a week though and I only visited two places where I also knew people but I travelled and did the planning on my own which was a challenge. It was the first time I travelled alone without anyone telling me where to get my ticket, where and what to eat, etc. It was really eye-opening.’

Krishna: ‘It was actually my second, my first trip was in Dubai in 2019 when I was 23. That was also a fun experience. I stayed for five days and really experienced everything on my own. I went on desert safaris, went to the top of the Burj Kalifa and did a marine cruise. Dubai is very multicultural. You can find people from India, Pakistan, Italy, all sorts of places and that’s very noticeable when visiting. Doha was very different in that aspect. The country has more cultural values, restrictions and a specific dress code.’

Why did you decide to go solo?

Vinuthna: ‘My first solo trip was because I just had gone through a terrible breakup. I then decided to just go somewhere, because I just didn’t want to be in the city anymore. Then my last one was because the effects of the pandemic were really hitting. I just could not take the staticness of everything anymore. Because of the pandemic, we had to actively make the decision to not do certain things and I felt like my mindset had completely settled into that. Now I feel like I’ve regained that control.’

Krishna: ‘We all know the problem when you make plans with people and you expect to go on a trip with others, but then you end up all by yourself. Plans change and people change their minds, but that’s okay. I’m also single, but not having a companion doesn’t stop me from travelling the world.’

‘You only have a certain amount of time and could miss out on so much in your life because you’re just waiting.’

Have you ever had a bad experience?

Vinuthna: ‘The one let’s say unpleasant experience I had was in Goa back in India. It was after a night of partying, a group of guys were following me back from the club. They were really creepy, but I just ignored them and walked away. I mean, it’s pretty much always like that at party places, a lot of people are on a lot of stuff so you just want to stay safe and get home well.’

‘During my road trip, there was one scary experience though. I was driving full speed, like 80mph, to the Grand Canyon and suddenly got hit by a tire on the highway. It hit the front of my car, made a hole in the front and really messed up the entire outside. Somehow my car was still functional so I was able to finish my trip and went to a mechanic once I got home.’

Krishna: ‘To this day, I’ve never had a bad experience.’

Was there ever a moment when you didn’t feel safe?

Vinuthna: ‘I don’t know if this is me not knowing the people there, but when I was driving through the midwest that’s when I was the most cautious. The reason I was acting that way was because I obviously have preconceived notions about the people there, but I also heard some stories of friends of mine. They were on a vacation in the midwest and stopped their car alongside the road to smoke. Where they were standing happened to be someone’s property and suddenly someone ran towards them with a gun. Needless to say I never stopped along the way there, always at a gas station or a McDonalds.’

‘The big difference between the Southwest and the Midwest are the people. In the South, especially California and even Arizona, there are a lot of Latin Americans, Native Americans and black people. It’s a really diverse scene, whilst in the midwest, people are hanging their ‘Trump 2022’ flags on their houses. That just made me realise I had to get out of there.’

Krishna: ‘There were also a lot of tourists in Doha when I went so I felt very safe as well.’

Are there any travel plans for the near future?

Vinuthna: ‘I have a really long list of where I still want to go. My goal is to be able to say I visited every single country by the time I die, solo or not. Obviously, there are a few countries where I’m hesitant to go to by myself. I’m thinking of countries in the Middle East and China purely for the fact of if something were to happen, would I be able to get home safely.’

‘I absolutely want to go to Antarctica, but that’s a really heavy endeavour though. You have to pay a ton of money to just be able to go, so that’s holding me back a little bit.’

Krishna: ‘Of course, I have a huge bucket list. I definitely want to explore Hawaii, Puerto Rico, New Zealand and every country in Europe.’

How did family and friends react to you going solo?

Vinuthna: ‘My mom tried to convince me not to do it. My dad was also hesitant. My friends were unsure as well, that’s probably because nobody in our friend group has done it yet. Me being the first might push them to do it as well in the future, but overall they were supportive. A few of them came out and met me at different points during the trip, which was really fun. Family besides my mom and dad were very suspicious. They were telling me to not talk to anyone and only stay in AirBnB’s. That’s advice that I actually didn’t follow, I even went out and did some couch surfing while I was gone.’

Krishna: ‘My brother is actually the one that pushed me to go by myself the first time. He’s the one that inspired me to start travelling, as he’s seen quite a few countries. We didn’t tell my parents as they would be very anxious about me going somewhere without any friends or family. I decided to just board the plane and send them a message saying where I was when we landed. After reassuring them I was safe and sound, they were supportive and trusted me.’

Do you have any tickets booked already for your next trip?

Vinuthna: ‘I’m planning to go to Jordan and Turkey at the end of the month. Part of it is for work but I took the liberty to plan a trip to Turkey as well. It’s going to be a solo trip again. It’s also going to be on my birthday weekend so it’ll be exciting to cut some cake on a hot air balloon.’

Do you still have contact with people you met during your trip?

Vinuthna: ‘As I said, I did some couch surfing when I was on my road trip. I was staying at this one man’s place in Denver, Colorado and he ended up being very fun. He showed me the city over the weekend and took me to a gay bar and it was during Halloween so I did their makeup and we all dressed up. He was also an ex-Mormon, so it was really interesting to hear his stories. We still keep in contact and maybe are going to a concert together soon.  Then I also stayed with someone in Kansas, surprisingly. He showed me around the city too and what was really interesting was that his house was actually on the segregation line. That’s information you don’t know unless you really get the chance to talk to people living there.’

Krishna: ‘I met a Pakistani woman in Doha who offered to take a picture of me. She was very nice, we exchanged contact details and still talk to this day. It turns out she’s going through a divorce so I support her during the process and we became good friends.’

Do you have any tips for women that want to travel alone for the first time?

Vinuthna: ‘Stay in hostels, but don’t forget to stay alone sometimes as well. During my trip, I quickly realised I needed some alone time too. It’s nice making friends and learning new things, but sometimes that overtakes what your intentions were coming to that place. Finding that balance is really important. Besides that, the only thing I can tell you is to just go out there. You only have a certain amount of time and could miss out on so much in your life because you’re just waiting.’

Krishna: ‘I haven’t travelled that much so I don’t have enough experience to give you insight information, but I would say just travel as much as you can. Explore the world, meet new people and spread love wherever you go.’