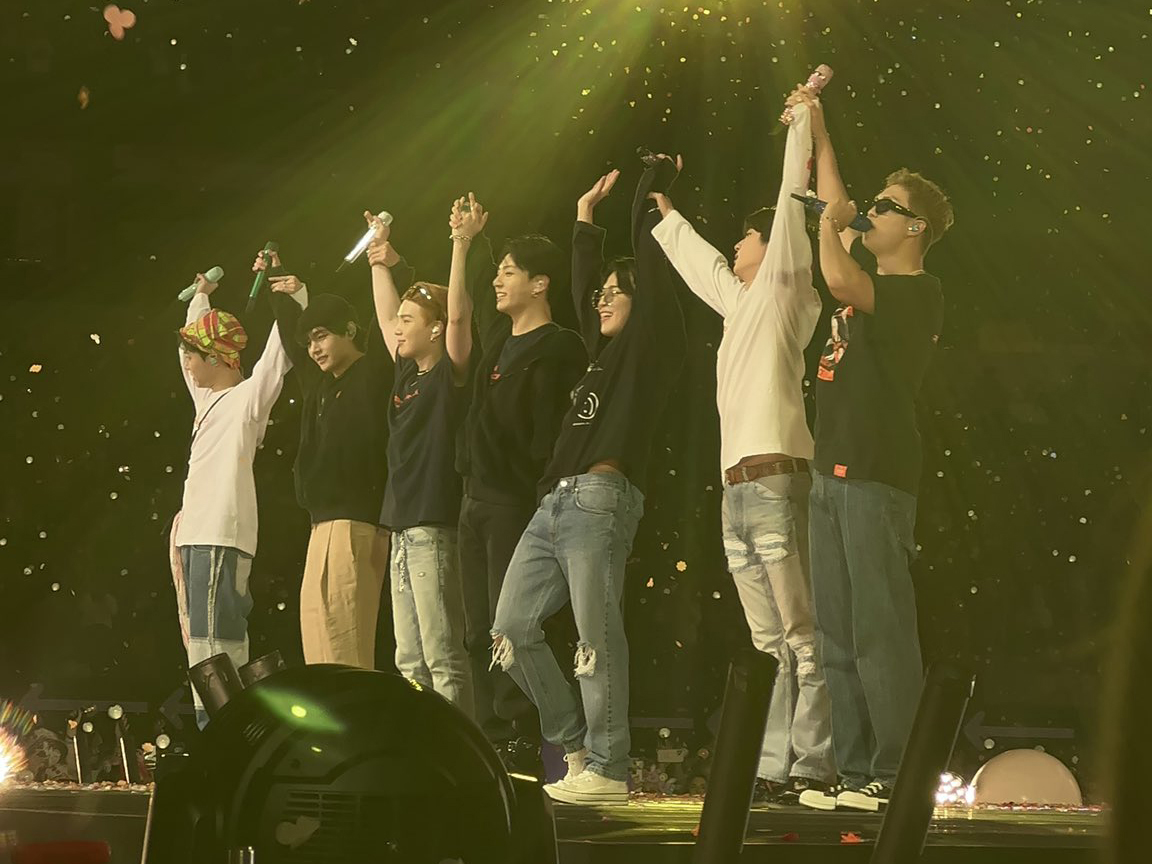 The famous Korean pop group BTS will be performing their next show Permission to Dance On Stage – Seoul in-person and online. The Seoul show on the 12th of March will be streamed in cinemas worldwide. Also, in the Belgian cinema chain Kinepolis. ‘Many experts think the concert will break the previous record BTS set with almost a million online viewers. K-pop fan Amar Ammi is certain: ‘K-pop fans are good at convincing others in joining the K-pop fandom. Permission to dance will break records.’

‘It’s the third BTS concert that we stream in our theatres. We bring the fans together which adds to the experience’, says Anneleen Van Troos, the spokesperson from Kinepolis Belgium. Last summer their online event Muster SOWOOZOO had 1.33 million paid viewers from 195 countries, which broke the World Record for the Most viewed music concert livestream on a bespoke platform. The nine-time Billboard music award-winning band BTS announced their show on the 15th of February and just Kinepolis has already sold 6,500 tickets.

BTS’ shows are very interactive, which makes them more appealing for the viewers. ‘Artists make it more interactive through apps, so they can do quizzes. Other than that the shows in cinemas add exclusive content, such as interviews before or after the shows’, says Anneleen. ‘That makes it different from online streaming on your computer or TV.’ Also, BTS can reach a bigger audience through online concerts. And K-pop songwriter Jan Baars adds that live viewing in cinema makes the online experience even better since the viewer enjoys it with other fans. One thing is for certain, BTS’ online viewing party will be even bigger than their past events. ‘They are in an upwards spiral. Every concert is bigger than the previous one’, Jan says.

The fans make it happen

‘The fans are more serious than what we are used to in western pop music. They want to do all kinds of things for their idols. If that means that they have to watch online concerts during a pandemic, then they will watch the online shows’, tells K-pop songwriter Jan Baars. Western K-pop fans are also more inclined to watch an online show since there are fewer live shows in Europe and North America. ‘We have a smaller chance of seeing our idols in real life, so we want to attend every concert we can. Take what you can get’, says K-pop fan Anne. K-pop fan Amar Ammi seconds that: ‘Any event Red Velvet organizes, I will attend. It’s loyalty at its finest.’

‘We have a smaller chance of seeing our idols in real life, so we want to attend every concert we can’ – Anne, K-pop fan

However, K-pop fans will go above and beyond in all aspects. ‘I recently worked on a song for the K-pop band NMIXX, who just debuted. And even before they released their first song, they already had a strong fan base. Their song got leaked and fans were messaging me if I could help take the leaked song off the internet. So, even a group that hasn’t debuted yet have such dedicated fans.’

The next Take That and Spice Girls

‘The K-pop phenomenon resembles the western eighties groups such as Take That, the Spice Girls and the Backstreet Boys. In that era, the fans also went all the way for their idols. So I think that for many fans that way of making music and making a pop group just works well’, Jan says. Record labels play a big role in the K-pop industry. Just like it was normal in the fifties to be a fan of Motown artists, it is now normal in the K-pop world to be a fan of a label. ‘The labels have a sound, just like the Motown record label. It isn’t only a collection of artists that fits together. The labels have a specific sound that goes with them. That way, fans know beforehand if they will like a group’, Jan adds. Besides, record labels know their target audience very well. ‘A K-pop fan is very loyal towards their idol and will attend many events and record labels play into that’, says Amar.

‘Many of the Korean bands work hard to make their shows as immersive as possible’, Jan says. ‘It’s not just an online concert, they often host it live on their websites and put a lot of effort into interaction with their fans. That way, the fans feel seen and included. As far as I know, no western artist has done that.’ Amar certainly agrees: ‘Western pop artists should do what K-pop artists do. The formula works, so why try to reinvent the wheel?’