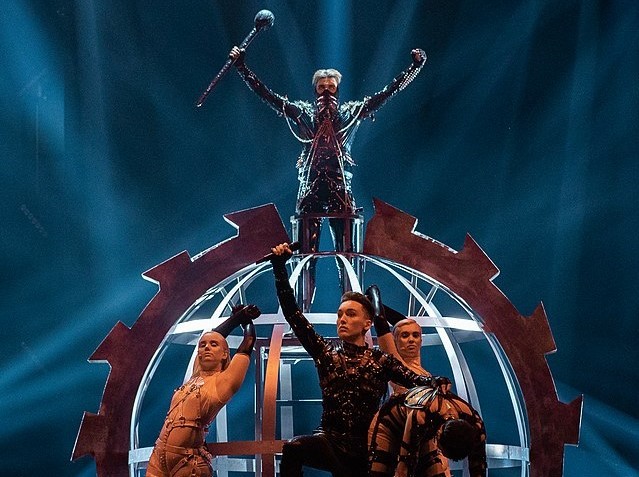 The history of the Eurovision song contest is riddled with examples of the organisation banning countries from broadcasting the show and barring acts from entering the competition. Countries such as Russia and Poland have responded by censoring Eurovision, or parts of the show, right back. We look back at how Eurovision is never far removed from controversy.

The European Broadcasting Union (EBU), which has organised the Eurovision Song Contest for years, has a strong ‘no politics’ rule when it comes to Eurovision submissions. Throughout the years many countries have been banned from participating for breaking this rule. On top of this, the contest has a strong LGBTQIA+ following and has become somewhat of a safe space for LGBTQIA+ participants and fans. In return countries such as Poland, Russia and China, who have historically had issues with LGBTQIA+ rights,  have blurred or cut out parts of the show. This combination has led to a competition riddled with censorship.

Conchita Wurst
Austrian drag queen Conchita Wurst was the revelation of Eurovision 2014, but she almost didn’t make it to the contest. A Russian Parent Meeting group started a petition to have her removed from the contest or for Russia to not broadcast her performance. The petition amassed over 15.000 signatures. The Russian Parent Meeting group claimed that Wurst led a lifestyle inapplicable for Russians and that ‘the popular international competition that our children will be watching has become a hotbed of sodomy.’ Conchita Wurst went on to win the contest with her hit single Rise Like a Phoenix.

Chinese broadcaster gets banned from airing Eurovision
Mango TV, a Chinese broadcaster, censored LGBT elements of a performance by Ireland’s Ryan O’Shaughnessy during the semi-finals of the 2018 edition of the festival. During the performance, Mango TV blacked out two male dancers performing together and pixelated a rainbow flag. In response, the European Broadcasting Union terminated its partnership with Mango claiming that the channel’s decision was “not in line with our values of universality and inclusivity and our proud tradition of celebrating diversity through music.”

Eurovision DVD censors Hatari protest
In 2019 Icelandic band Hatari used their camera time during the televoting part of the show to protest the Israeli occupation of Palestine. They held up Palestinian flags whenever they appeared on screen. During the live show, the camera quickly cut away from Hatari. Twitter user @kaeratari was quick to point out that these protests were no longer visible on the official Eurovision DVD. Instead, an Icelandic flag covered up the band’s live reaction.

Poland won’t show transgender host
NikkieTutorials, also known as Nikkie De Jager, was chosen to host the 2021 Eurovision show in Rotterdam in The Netherlands. NikkieTutorials is a well-known transgender YouTuber with over thirteen million subscribers. Polish national TV channel TVP censored all of De Jager’s segments during the broadcast by switching to commercial breaks. TVP has faced a lot of backlash in the past for its political propaganda and has been called a ‘mouthpiece’ for the far-right Polish government. Polish Eurovision fans were not surprised by this, as many other LGBTQIA+ elements have been censored in the past.

Belarus disqualified
Belarus was disqualified by the EBU back in 2021. According to the European Broadcasting Union, the lyrics in their entry Ya Nauchu Tebya mocked the people protesting against the Belarusian dictator Alexander Lukashenko, which started in August 2020 when Lukashenko won the presidential elections. The EBU ruled that the song’s content went against their strict ‘no politics’ rule.

Instead of meat, I eat veggies and p***y
The song Eat Your Salad by Latvian band Citi Zēni raised many eyebrows when it first came out. On the surface, this 2022 entry is a fun song about the environment, but the opening line is pretty out there. ‘Instead of meat I eat veggies and p***y, I like them both fresh, like them both juicy’, hasn’t been censored yet, but the group has received an official guideline from the EBU stating that they will be disqualified if they sing the full song. Many Eurovision fans have stated they are against this rule and have launched a campaign to shout the censored word during the live show. One fan even said: ‘The thing I’m most excited for this Eurovision is when the entire live crowd shouts out the censored/silenced word in Latvia’s performance (you know the one).’

Moldova’s 2022 submission gets a precautionary makeover
Zdob si Zdub, the band behind Romania’s 2022 Eurovision submission, asked their lyric writer for a more neutral version of their song The train to ensure no EBU rules would be broken. The song was originally about a train route across Moldova’s border into Romania. Moldova and Romania share a long history. A union between the two has been the topic of many fiery debates. Lyrics in the original version which referred to “an old country and new country that were like two in one” were scrapped. Moldovans experienced hard censorship under Soviet rule and immediately accused the ECB of doing the same thing. Turns out founding member of the band Roman Iagupov had asked their lyricist for a couple of versions of the song to respect the ECB’s rule for non-political songs. He assured that there was no outside pressure on the band to change the lyrics.

The Russia-Ukraine issue
Since Russia annexed Crimea back in 2014 their acts at Eurovision have been booed. In 2014 and 2015 the EBC censored the crowd’s reaction and replaced it with applause. Since 2016 the live response from the crowd has been aired again. Russia’s 2017 entry, Yuliya Samoylova, was ruled out of participating because she had travelled from Russia to Crimea in 2015. At the time the Ukrainian government had issued a ban on travelling directly from Russia to Crimea. The EBU offered a compromise in which they would allow Samoylova to perform remotely from an outside venue but Russia refused to accept these conditions and withdrew their candidate.

The 2019 Ukrainian candidate, Maruv, was replaced after she refused to sign a contract stating she would cancel all her upcoming performances in Russia. Maruv retaliated by revealing the contract also prohibited her from communicating with any journalists without the permission of the Ukrainian Eurovision broadcaster. Maruv pulled out as a candidate. Her runners-up also refused to represent Ukraine. The Ukrainian broadcaster withdrew from the contest stating they had systemic problems within their selection procedure.

In 2020 a new rule was added to the Ukrainian selection procedure which banned artists who have performed in Crimea since 2014 from entering the Eurovision preselection. After the 2022 Russian invasion of Ukraine, the Ukrainian broadcasting company asked Russia no longer be allowed to broadcast the contest and be banned from competing in the contest. The EBU banned Russia from the 2022 edition stating: ‘In light of the unprecedented crisis in Ukraine, the inclusion of a Russian entry in this year’s Contest would bring the competition into disrepute.’

What about the future?
With Russia already banned but countries like Poland still being allowed to participate the EBU is walking a fine line between keeping both their many LGBTQIA+ fans and anti-LGBTQIA+ broadcasters happy. Many Eurovision acts have tried to use their platform to make political statements or raise awareness. The question is: how long can the European Broadcasting Union remain apolitical?