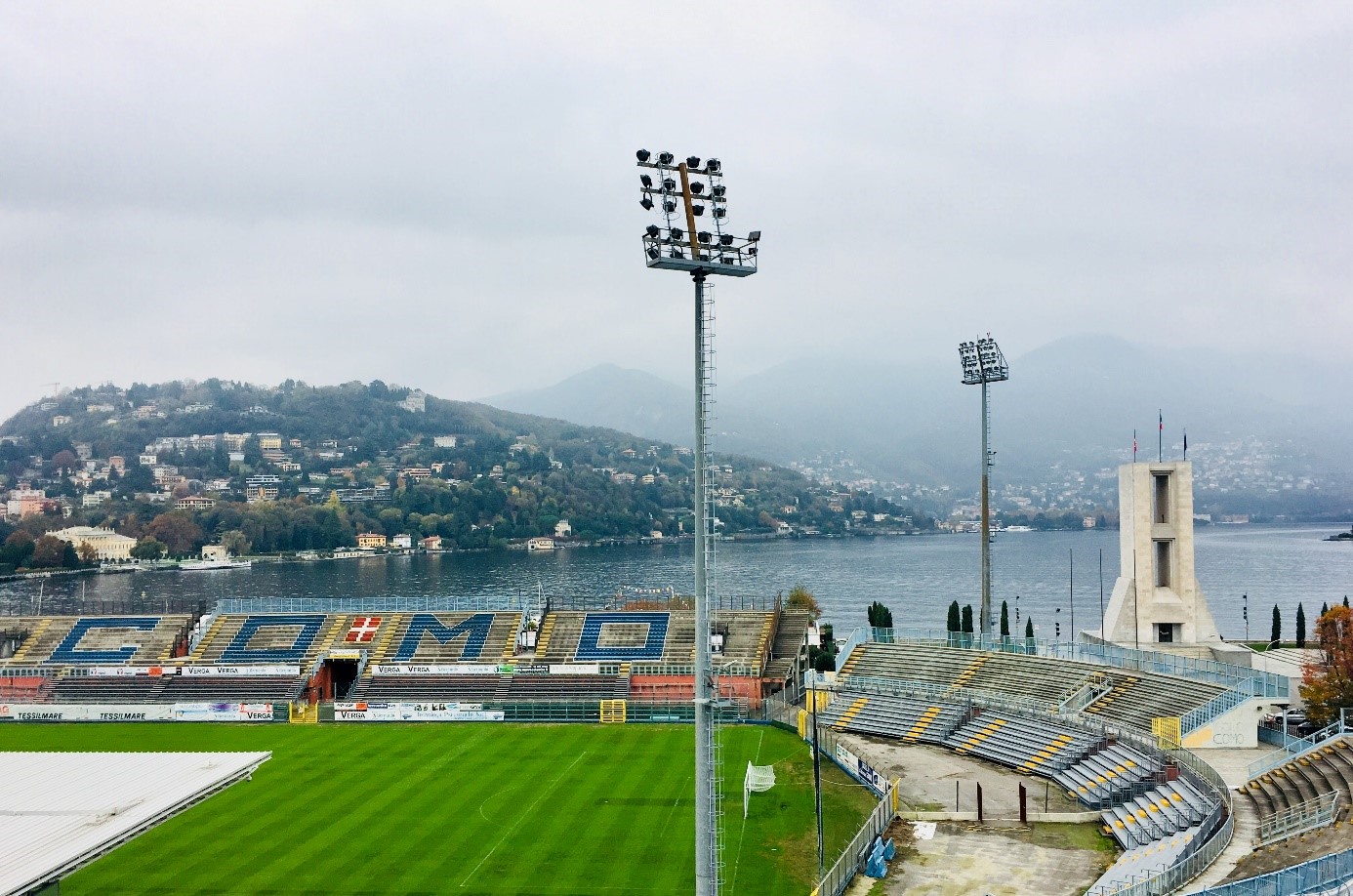 Italian Serie B (second division) football club Como 1907 may be a club that not many have heard of yet, but one that you could be hearing a lot more about in the future. Como 1907 has the richest owners in Italian football. They convinced Spanish footballer Cesc Fàbregas and one of the best players of all time, Thierry Henry, to buy shares in the club. We might be looking at one of the biggest footballing powerhouses of the future and one that will put the community first.

Lake Como needs no introduction. It is a tourist hotspot and a place for the rich and famous. Actor George Clooney might be the most famous resident. Even though we have all heard of the lake, the football club Como 1907 was little-known up until this summer. However, that soon changed after the club acquired Cesc Fàgrebas. After a successful career that saw him play for the likes of Arsenal, FC Barcelona, Chelsea and AS Monaco, the 35-year-old decided to move to the club in the Italy’s second division.

Fàbregas is approaching the end of his career and only made a handful of appearances for AS Monaco last season. It was therefore no surprise to see him move to a smaller club, but his transfer to Como was one that caught the eye of many.

Como 1907 fan Chiara Migliorin could not believe her eyes when the Spanish footballer with 110 caps for his country joined her club. ‘Wow! The Cesc Fàbregas! Really? I couldn’t believe it. We all know Fàbregas. He’s a great footballer and for him to join Como was unimaginable.’

Como’s owners Robert and Michael Hartono have an estimated net worth of €43.5 billion. The 81-year-old and 82-year-old Indonesian brothers acquired most of their fortune from their investment in the Central Bank of Asia. They are also both the owners of Djarum, one of the biggest producers of cigarettes worldwide. In Italy, Juventus have the second richest owner, the Italian Agnelli family, which has an estimated net worth of €15,9 billion. In the highest Italian division, Serie A, nine football clubs are (partly) owned by foreign owners.

Como 1907 was, as the name suggests, founded in 1907. The football club has spent most of its existence playing in the second and third division. Como has played thirteen seasons in Serie A with its highest finish ever being sixth in 1950. The last season they played in the Italian top flight was in the 2002-03 season. In the last 18 years, the club has been declared bankrupt twice. In 2019, when the club was taken over by the Hartono brothers, they still played in the fourth tier of Italian football.

Even though Como’s owners are by far the richest owners in Italian football, it took three years for the football world to turn its eyes to the club. The arrivals of Cesc Fàbregas, as a player and shareholder, and Thierry Henry, as a shareholder, triggered a considerable amount of attention in the club.

Besides Fàbregas, the club made two other statement signings this summer. Midfielder Daniele Baselli, who has made over 234 appearances in the Serie A for Atalanta, Torino and Cagliari moved to Como. The club also brought in the 24-year-old striker Patrick Cutrone, who was a bright talent at AC Milan as a teenager, from Premier League club Wolverhampton Wanderers. Cutrone struggled to make an impact in England and had some difficult times after losing his father to covid in January. He now made a return to the city he was born and raised in. ‘Being able to play and represent the club of my city is a real honour. This is where I grew up, where I first kicked a ball, where my heart is, and where my family and friends are. Being able to return here as a footballer is one of the greatest joys’, said Cutrone on Como’s Instagram.

‘Reaching Serie A next season would be more than problematic’ – Dennis Wise, football director of Como 1907

With three statement signings, you would expect  Como to want to be challenging for promotion, but their first goal is to become a midtable side challenging for play-off spots. However, this season they have struggled and currently sit in 19th place with six points from nine games, a spot that would, if it stays the same, see them relegate to the third division. Interestingly, Como’s football director Dennis Wise also said in an interview with The Mirror that reaching Serie A next season would be more than problematic. ‘I’m scared we might end up getting to Serie A before the new stadium. We have a big problem if that happens. We’re pushing. We’ve set ourselves three years to get to that stage.’

The owners have been prioritising growth in the infrastructure of the club. They bought an academy to develop youth players and recently finished building a new training ground. By 2025, the owners aim to have a new stadium, to play in the Serie A and to become a global brand. But when the owners acquired Como in 2019, this was not the main ambition. The first aim was to allow Indonesian players to develop in Europe. ‘It’s no longer a project to suit Indonesian development but actually a project to grow the football club itself. That has become the sole ambition’, explained Mirwan Sumarso, an official representative of the ownership group, in an interview with I News.

The involvement of Cesc Fàbregas and Thierry Henry has made it a lot easier for Como 1907 to become a globally-recognised brand. And the club is not only reaching out to footballers to gain more attention. The American artist Khalid was seen wearing a Como football shirt in the music video of his song ‘Last Call’, which he released in March 2022. Sumarso explains that they were not just looking at the reputation of Fàbregas, Henry and also their director Wise, but also at their experience when they brought them into the club. ‘If you want to learn something you have to learn from the best. Whatever they have can only benefit us.’

Como 1907 is paying a lot of attention to the local community. During the covid pandemic, the club donated money to a nearby hospital and the club is also helping to fund research into cancer treatments. Thierry Henry decided to invest in the club when he heard about how Como is trying to involve the community, he said in an interview with The Mirror. ‘You’ve heard it all before: ”We’re trying to go back up, we’re going to have a new stadium, a new training facility, we’ll bring the academy back.”’ But then they started speaking to me about the community part of it and it was different to what I usually heard. That made the difference for me.’

They started speaking to me about the community part of it and it was different to what I usually heard. That made the difference for me – Thierry Henry

Como supporter Migliorin feels the closeness of the owners to her club too. ‘They care about our entire community and we feel the interest they have in the club. All the profits of the shirt sales from this season will be given to local causes for example.’

And these are not the only initiatives of the owners. The club also launched Como4Como, a plan to ensure that, by 2025, the club will only use local resources. They also set up a foundation for locals in need and they donated money to a local cinema that was struggling financially and facing closure. The club has also promised not to release a new kit every year in order to save their fans some money. Even though Lake Como has the reputation of being home to the rich and famous, the city of Como is actually a working-class city and the people that work and live there do not reflect the affluent reputation.

On an individual level, the club has also made a big difference in the life of their maintenance man Abi. Before they hired Abi, he was a homeless man who was cleaning a path in Como when Dennis Wise spotted him and offered him the job. ‘He’s now been here just over a year and he helps. He’s always smiling. He’s a very nice guy, very hard-working. We need to help the place and this is what the owners want to do, involve the community’, explains Wise in The Mirror.

This is only the beginning for Como 1907. When a rich owner takes over your club it could be a hit or miss, but in Como they seem to be doing something special. ‘I don’t know what will happen in the future, but I believe we can achieve good things with this squad. There certainly is the possibility for us to obtain excellent results and the owners, footballers and the fans believe that too’, says Migliorin. Como 1907 fan Paolo Fumagalli agrees and says that he is very excited to be part of this project, but his expectations are not going through the roof yet. ‘Nobody is thinking about winning the Serie A or Champions League. For me, it already is a dream come true to one day become a stable Serie A team.’

Como 1907 also released a documentary series on their YouTube channel about the club and their project.