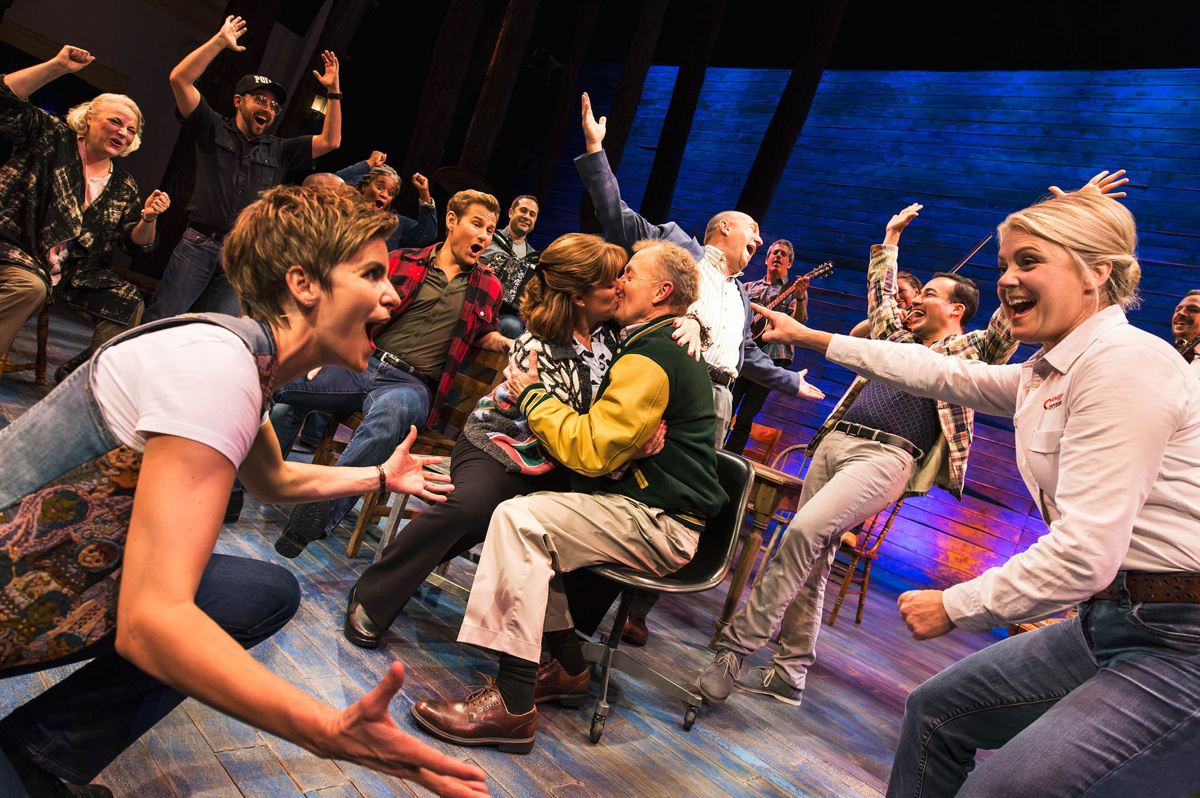 After 25 previews and 1670 regular performances over the course of five years, Broadway’s Come From Away closed on October 2nd. It is a musical that tells the story of how people in a Canadian town came together after the attacks on 9/11 to help around 7,000 stranded passengers. The result? Tight friendships that hold to this day, and a musical that only increased this feeling of community.

September 11, 2001. After two hijacked planes hit the Twin Towers, a third plane crashed into the Pentagon and a fourth hijacked plane was diverted into a field by revolting passengers, the United States Federal Aviation Administration closed the American airspace for all international flights. And so every plane in the air with the US as a destination had to be diverted.

A town that’s suddenly doubled population
At the airport in Gander, in Newfoundland in Canada, 38 of these planes landed. On board: a total of over 6,500 passengers and crew members. The town of Gander itself has around 9,000 citizens, so over the course of a few hours, their population almost doubled in size. Immediately, they set to work: organize transport to community centers, schools and churches for the ‘plane people’ and prepare large amounts of food for the stranded passengers, who had been stuck in a plane for quite some time. The people from Gander opened their homes and their community for five days to help the ‘come from aways’ in any way they could.

On the 10th anniversary of what happened, September 11, 2011, Irene Sankoff and David Hein traveled to Gander. During their time there, they interviewed the people from Gander who so generously came together for the ‘plane people’, they talked to passengers from the planes, and they started to craft the story of what would become Come From Away.

Welcome to the friends who have come from away
Irene Sankoff and David Hein wanted to tell the stories of both the people from Gander and the stranded passengers. The opposite has been done several times before, where it is just one group of people that goes to a new location and comes back changed. David Hein explains their choice in a documentary video on the production of the musical: ‘We’re taking two groups of protagonists. We’re taking the people coming to the strange place, but we’re also taking the people who live in the strange place and we show how they’re both changed and how they both came together. That’s what makes us whole, realizing that it’s not us and them, it’s all of us.’

For many members of the original cast – the majority who had been there since the first staged production at La Jolla Playhouse in San Diego in 2015 – the highlight of their time in Come From Away was the benefit concert they played in Gander, before the musical went to Broadway. Cast member Joel Hatch said in the video above that it was important for them to do the concert there, in the heart of the community their musical is about: ‘It was the highest stakes for us, personally, because we needed to know that they were okay with how we were telling their story.’ After the concert, cast member Astrid Van Wieren, who plays community member Beulah Davis, could only say: ‘Tonight our family just got bigger.’

There’s a solemn, old tradition
During that trip, the cast members also had a chance to meet the real people their characters are based on. For some of them, it changed their life. Jenn Colella, for example, who received a Tony nomination for her role in Come From Away, has formed a deep friendship with Captain Beverley Bass. She was the first female pilot for American Airlines, flying from Paris to Dallas on that fateful day. ‘Captain Bass has been incredibly supportive from the beginning. From the moment we met, we felt a kinship with one another and we became fast friends. She has only supported every decision I’ve ever made while exploring the character of her’, Colella said in an interview with Entertainment Weekly.

During the days after the attacks, the people from Gander tried their best to distract the plane people from the negativity. One of their ideas was ‘Screech-In’, an official ceremony to become an honorary Newfoundlander. The ceremony entails a shot of screech, which is a local rum; a short recitation in which the ‘come from aways’ confirm they want to become a Newfoundlander; and lastly the candidates have to kiss a cod. Several of the original passengers did, and so did the cast members when they were in Gander for the benefit concert.

Go on- kiss the fish! We’re celebrating #InternationalKissingDay the Come From Away way- with a kiss, a cod, and whatever’s in between! 😘🐟 pic.twitter.com/0lXGYbRzrW

Because we come from everywhere
Come From Away has not only been successful in the United States and Canada. It has also been produced in Ireland, the United Kingdom and Australia. There’s the Argentinian version, as well as the Swedish version. And just last year, the non-replica production in the Netherlands won four Musical Awards.

It clearly doesn’t mean that just because the Broadway production has closed, Come From Away’s impact will dissolve. Yes, the production on West End in London is also set to close on January 7th, 2023. Nonetheless, the North American tour, running since 2018, will continue bringing this story to various audiences in Canada and the US. So will the Australian tour. And so will the numerous other international productions that are still to be made. As Emily Short from BroadwayWorld put it, the musical ‘uses art to tell the truth – a frightening truth of terroristic acts and a hopeful truth of human connection.’