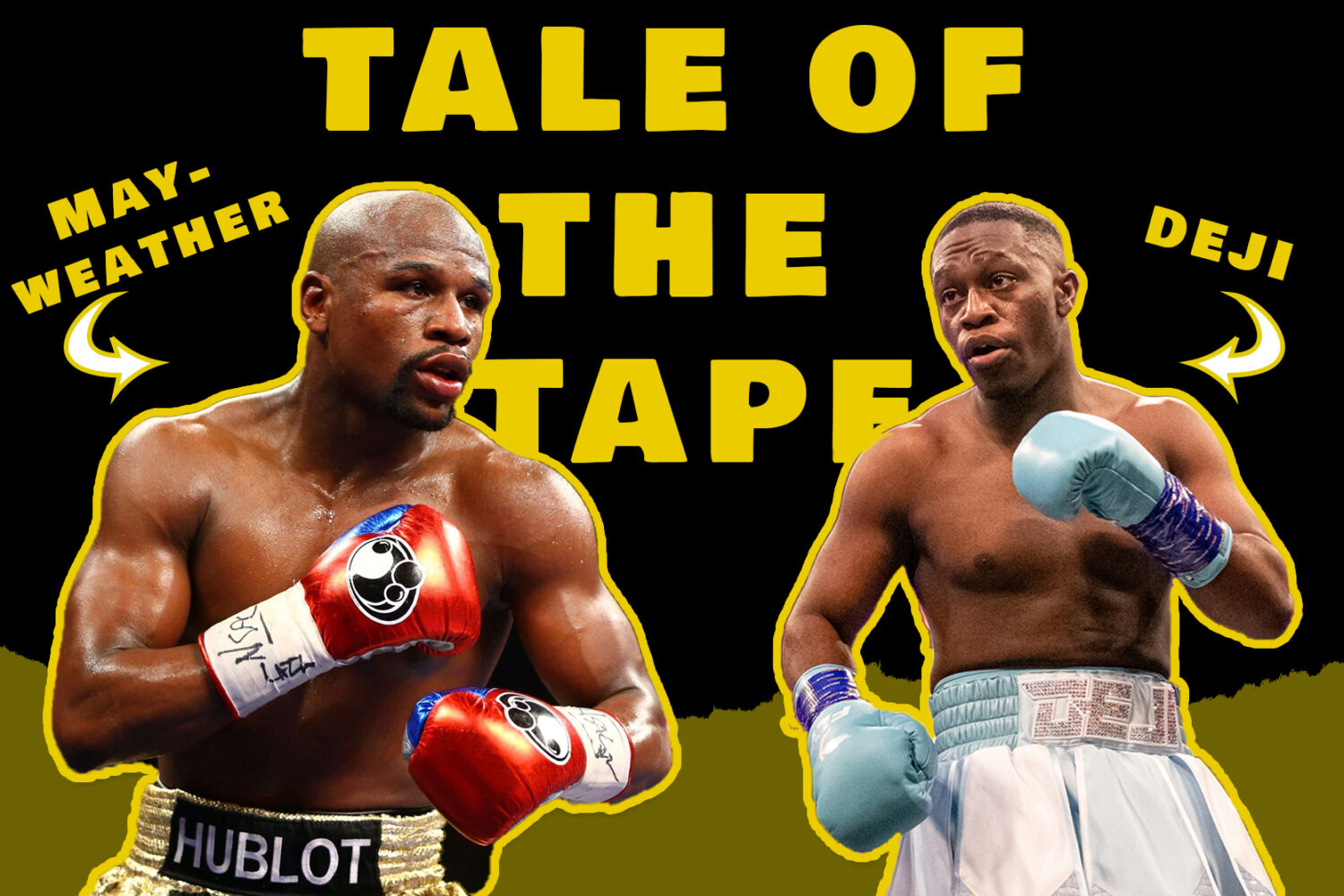 American boxer Floyd Mayweather has beaten the British YouTuber Deji Olatunji, simply known as Deji, in an exhibition boxing match in Dubai on the 13th of November 2022. The fight was stopped in the sixth round with Money Mayweather in control of it right from the start. Deji, who is the younger brother of the British YouTuber KSI, did, however, land a jab that gave Mayweather a black eye.

Deji, who has over 10 million subscribers on YouTube, was shown no respect by one of the all-time greatest boxers. Mayweather was dancing in the ring and keeping his hands completely by his sides as Deji tried to feel his way into the fight. From the third round, Deji started to throw more punches and landed some. In the sixth round, Olatunji again landed some great punches, before Mayweather locked him up in the corner of the ring and the referee blew off the fight.

The crowd in the Coca-Cola Arena in Dubai was cheering for Deji, who felt good after the fight. ‘I know Mayweather is a counterpuncher, so I was strategic with my punches. It was an early stoppage. I wanted to carry on but boxing is boxing, so I understand. This whole experience has been eye-opening. It’s insane to go from where I was to where I am now,’ said Deji in an interview with DAZN right after the fight.

Mayweather was also very happy with the event and commented in the ring on the black eye that Deji gave him. ‘I am glad he landed a good shot. This is part of fighting. These people want to see entertainment and that is what we both gave them tonight.’

He also had some positive words for the 25-year-old Deji, who is just at the start of his boxing journey. ‘You’re a tough competitor, I’m proud of you. Keep up the great work. Your brother KSI, he’s a hell of a fighter also.’

KSI, who has 24 million subscribers on YouTube, is one of the YouTubers who first fought in an influencer boxing match with fellow British YouTuber Joe Weller in 2018. After, KSI went on to fight the American YouTuber Logan Paul twice. In August 2022 he also fought Mexican boxer Rafael Pineda and British rapper Swarmz in one night. The second fight between KSI and Logan Paul ranks in the top five highest-selling boxing fights of all time with two million pay-per-views.

Thomas More student Juan Pablo Alvarez is an avid boxing fan but refuses to pay for influencer boxing matches. ‘I just wait until the next day to watch the highlights. I’m a very analytical person and the way professional boxers move is different, so I sometimes get mad and frustrated when I watch influencers box. But I do like watching the show and spectacle, so the highlights are enough for me.’

Alvarez believes that influencer boxing is good because it brings a new audience to the sport but has his concerns. ‘I hope it evolves as the majority of the boxing influencers lack discipline and skill. I hope new fans don’t think that this is always what boxing is supposed to look like.’

‘I like watching it a lot, it’s full of entertainment’ – Thomas More Student Noel Hapsoro

Thomas More student Noel Hapsoro finds influencer boxing very enjoyable. ‘I like watching it a lot, it’s full of entertainment. They are no professional athletes who dedicated their whole lives to the sport, but it still is very amusing.’

The Problem Child vs Fury

Two other influencer boxers, former Love Island winner Tommy Fury and YouTuber Jake Paul, got into an heated argument at the Mayweather vs Deji fight. Tommy Fury only had eyes for the American YouTuber after his win against the Cameroonian boxer Rolly Lambert. The younger brother of the heavyweight champion in the world, Tyson Fury, was ready to start a brawl right there and then with Jake Paul, who was in the commentary booth.

Jake Paul, the younger brother of Logan Paul, is one of the highest-ranked influencer boxers. He has fought former UFC (Ultimate Fighting Championship) fighters Tyron Woodley and Anderson Silva and defeated them both. The American YouTuber, also known under his boxing nickname the ‘Problem Child’, has been going back and forth with Tommy Fury for more than a year. Two boxing matches were previously scheduled between Tommy Fury and Jake Paul, but they were both called off. However, we might expect to see them in the ring soon.

Tommy Fury and Jake Paul are going AT IT 🤯

Watch #MayweatherDeji live on DAZN PPV in the US, CA, UK, Ire, Aus, NZ and Japan.

The next big influencer boxing event will be taking place in January 2023, as KSI will step into the ring again. KSI confirmed that this event will also see a highly anticipated boxing match between the YouTubers AnesonGib and Slim. On November 19th, there’s also another Misfits & DAZN X-Series influencer card which features boxer Hasim Rahman Jr vs former MMA-fighter Vitor Belfort as the main event.

Noel Hapsoro is tuning in for KSI’s fight in January. ‘He said it will be free to watch, so I’m definitely watching. I feel like this fight will be way better and more entertaining quality-wise. KSI has good technique and he takes boxing very seriously. He’s not like any influencer throwing around punches without skill.’

Deji also called out some potential future opponents in the ring, as we might expect them to feature in January’s boxing event too. ‘Justin Bieber, Liam Payne. Anyone who wants it. I want all the smoke.’