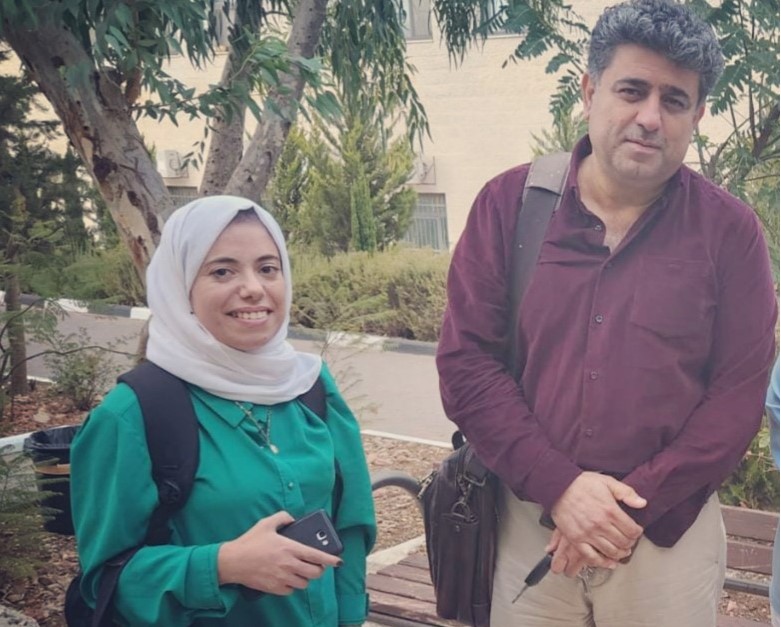 Oil, gas and electricity prices are rising in Europe after the Russo-Ukrainian war started in February, but what about Palestine? The Middle Eastern state depends largely on imported goods by sea, including from Ukraine and Russia. Due to the war, food, oil and gas prices have risen. ‘Students have to combine working and studying because otherwise, they can no longer afford transportation to the university. This adds a lot of pressure on us,’ explains Inés Haj Ali (29, left in the picture), a Palestinian master’s student in Digital Media and Communication at the Al-Quds University of Palestine.

‘Next to this, it is hard to find a job. I have good grades and even won a prize with a digital story I made and still I am not able to find work. Why? Prices are rising, the economic market is failing and on top of this, also corruption plays a huge role. If you don’t know the right people, chances of getting a good job are low. All this adds up to the vicious cycle we live in,’ Inés explains.

Inés lives in Nablus, a city in the West Bank. She commutes to the Al-Quds University in Ramallah, about 80 km South of Nablus, by bus or taxi. Palestine includes the Gaza Strip, the West Bank, and East Jerusalem, areas which are currently occupied by Israel.

Oil and gas prices are increasing in Palestine, affecting students’ daily life, according to Inés. ‘Transportation prices have gone up from 35 to 50 Shekels (from 10 to 14 euros) since the war. Students have to combine studying and working, which puts extra pressure on our daily lives. Living in Palestine is already a huge mess, and daily life is hectic. For example, we need to pass by many checkpoints before arriving at our destination.’

The two most important countries we import from are at war – Inés haj Ali, Palestinian student

Imported goods
Food prices are rising as well. ‘Since many products are imported via sea, they are already more expensive due to import taxes. Right now, the two most important countries we import from are at war, which makes the prices rise even more,’ says Inés. Palestine imports sunflower oil, corn, and wheat from Ukraine, and rice and raw sugar come from Russia.

A third of all imported wheat comes from Ukraine. ‘The most important food products used in the Palestinian kitchen come from either Ukraine or Russia, and now that prices are rising, families are struggling,’ Inés adds.

‘The rise in food and transportation costs affects mostly poor families and big families with more than one student at university since Palestinians are very concerned about their children’s higher education,’ concludes Inés.

We feel the consequences of the war, but in the face of everything, it is manageable – Naser Abdelkarim, professor in economics

Resilience
Naser Abdelkarim, a university professor in financial economics at the Arab-American University of Palestine, acknowledges that rising prices and inflation hit Palestinians, but also makes a side note.

‘We already pay a high price for the Israeli occupation, and therefore, we know how to work with every situation we get. In the end, Palestinians will find a way to manage family budgets. This evidently doesn’t mean there aren’t any problems: the current inflation will mostly hit Palestinians who are already struggling and are in need of aid. But overall, we have a very dynamic economy that exists for a big part of family businesses that are used to dealing with different crises and are therefore able to manage the economy. So yes, we feel the consequences of the war, but in the face of everything, it is manageable,’ Naser concludes.