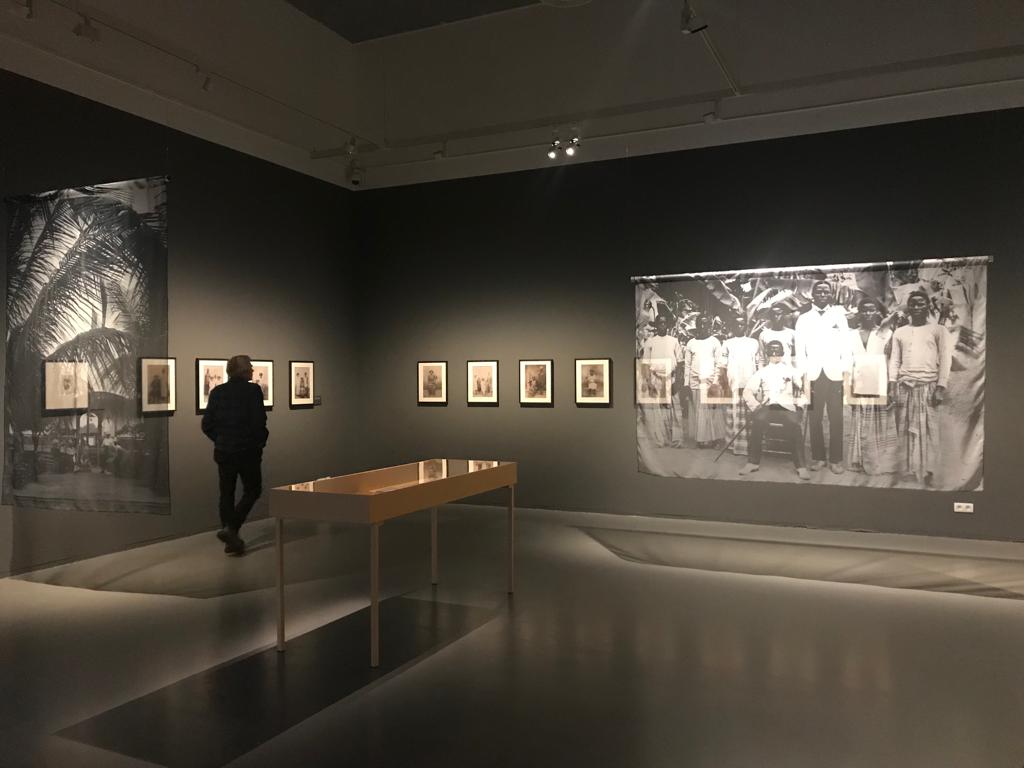 Have you ever seen a picture of Congolese bodybuilders? The exhibition Recaptioning Congo offers you that opportunity whilst providing a fresh way of looking at a major historical event that up until this day affected many. The exhibition slowly enters your brain like a snail on a rainy day that afterward doesn’t seem to find the exit.

Recaptioning Congo is an exhibition at the Photo Museum of Antwerp (FOMU) that was designed by the independent curator Sandrine Colard. Based on ten years of research, she put together an exhibition in order to provide a more layered inside into the history of photography during the colonial times of Congo (1882-1960). She explores how photography was used to capture the atrocities during red rubber when the infamous and notorious King of Belgium Leopold II was in power. How it was used as propaganda to convince Belgians that Congo was actually the same as the country they lived in, just more tropical. And how it was also used to capture some rare and authentic experiences of Congolese people.

Five minutes into the visit, a sign pops up with the warning ‘this room contains shocking images’ written on it

Five minutes into the visit, a sign pops up with the warning ‘this room contains shocking images’ written on it. You know you have messed up as a human race when an exhibition needs to put up a sign like that. The pictures inside are taken whilst Leopold II was in power, in order to show the world what unmistakable horror was happening. They are a big fat slap in the face of humankind and are not to be seen before or after any food intake. Gruesome? Yes. Utterly necessary to be shown? Also yes.

The exhibition radiates simplicity, and that is meant in the most positive way. There is no grandeur. Just the right amount of pictures in a black frame on a gray wall and some additional background information. This offers, just like a bag of salt and pepper-flavored crisps, the perfect balance. In this case between interesting visual content and time for the brain to reflect on the information the eyeballs just send up.

The epitome of this propaganda? A picture of children waving at Saint Nicholas

From happy Belgians playing football to even happier Belgians swimming around. The exhibition grabs you very subtly by the neck and guides you step by step through a time when propaganda was daily business and became the highest good. The epitome of this type of propaganda? A picture of children waving at Saint Nicholas when even he found the time to pass by Congo on the 6th of December. His horse didn’t. The air was probably too humid.

The counterbalance is offered with pictures from Congolese photographers who were mainly marginalised at that time. Family portraits, Congolese bodybuilders, and pictures of behind-the-scenes in Congo’s nightlife are all on display. There is nothing too extravagant, no lines of coke on the table or drunken twerking twenty-year-olds on the floor. These are pictures of people just having fun, riding their motorcycles or posing next to a car: being as they are, in their clothes, with their hairstyle, natural and ‘free’.

Don’t know what to watch on Netflix? Go and see the exhibition. Not interested in visiting the newly reopened Royal Museum of Fine Arts in Antwerp? Go see the exhibition instead. Because its sheer importance cannot be overstated.

Recaptioning Congo – to visit at FOMU until the 15th of January 2023.