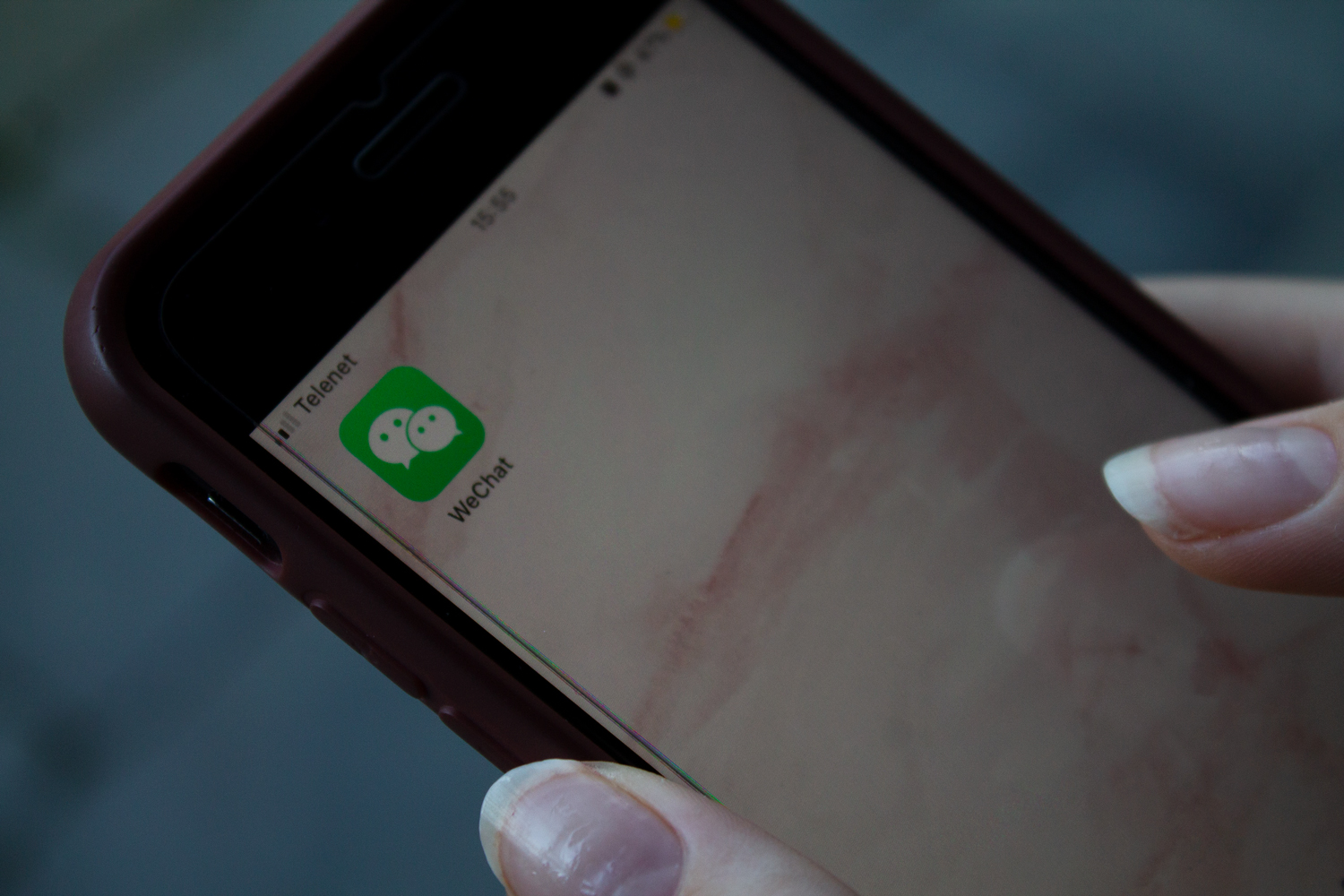 WeChat is China’s most used messaging app with a monthly user base of more than 1 billion people. It was launched in January 2011 by the Chinese tech giant Tencent. The app was originally made to be a messaging service, basically being a replica of WhatsApp. Now it has turned into a super app where you can do everything, from payments to making a reservation in a restaurant, or even booking a doctor’s appointment. ‘WeChat makes the communication between people here more direct. Everybody’s constantly talking to each other’, says Michel (21), a Belgian student who’s currently studying in China.

The primary use of WeChat is messaging. There’s a list of conversations that you’re in and the possibility to add people. Most often, people add each other by scanning the other person’s phone. Each WeChat user has a QR code that you can scan, but everybody also has a phone number or ID to add people.

Michel Vertongen (21) is a Belgian photography student, currently on exchange in Guangzhou, China. He tells us more about his experiences with WeChat so far: ‘It took me a while to understand the app in the beginning. It just looked like a messaging app like WhatsApp, the only difference to me was that you could pay via WeChat. But you can do a lot more with it.’

WeChat is the main way of communicating in China. Even when doing business, people prefer WeChat. Which can sound weird to us, since we use e-mail for business purposes. Michel says: ‘Communicating with teachers even happens via WeChat. Different group chats are constantly made and even the people who work for an international desk and help us find our way in China, talk to us via WeChat. Nothing happens via e-mail.’

‘We went to a restaurant and there were no waiters. Everything happened via WeChat: reservating, ordering and even paying.’

No waiters
‘WeChat is used to pay for almost everything’, Michel explains, ‘As long as you have a Chinese bank account, you can link it to WeChat Pay. Literally everything is paid for by WeChat: supermarkets, pubs, even people on the street who sell fruit, everybody has a QR code to pay via WeChat.’

But it’s not only paying things via the app which makes the app so great, you can also reserve restaurants, book flights or doctor’s appointments. ‘My friends and I went to a restaurant. On the table was a QR code you could scan via WeChat. When you scan the code, WeChat automatically goes to the restaurant’s website. You can select what you want to eat and pay for it afterwards. There were no waiters, we did everything via the app.’

‘This makes it really hard to save up your money’, Michel laughs, ‘It’s so quick and easy to pay, you just scan the code and it’s done. Your money is gone.’


You never know who’s listening
If you’ve read our previous two articles about China, you might know that China is really strict on what you can and can’t talk about online. The Chinese government monitors the internet really strictly and with WeChat, it isn’t any different. WeChat collects a lot of personal data. The government can access all of that data to keep track of their citizens.

‘You can talk about politics. You just have to be careful where you discuss it and with who. A friend of mine doesn’t want to drop names like Xi Jinping’s in a pub. You never know who’s listening.’

‘Yes, the government can see what you buy, what you say online, where you are. If you go on a rant about Hong Kong or start comparing Xi Jinping to Winnie the Pooh, you could get in trouble’, Michel states, ‘This is a personal opinion, but I don’t really see the problem. I don’t feel like I can’t say or do anything on the internet. I get that it’s kind of a violation of our privacy, but even then, I don’t mind it that much. You have to understand that China is such a big country with a population of over 1.3 billion. China really wants to have control over all those people. They do this because they want to break ground as a country. In the past, they’ve had a lot of crime and economic problems. I kind of get where they’re coming from by monitoring everything so strictly.’

Using your microphone
‘What’s scary though’, Michel says, ‘I sometimes receive a notification that Tencent, the founder of WeChat, is using my microphone, while I didn’t give the app permission to use it. But then again, it’s not like I’m constantly discussing stuff I shouldn’t be discussing. I heard that microphones can be activated when they hear certain words, but I try not to focus on that. I’m mostly preoccupied with school projects, myself and my friends.’

Just like Michel, most Chinese civilians don’t really pay attention to these things anymore. Some people try to discuss politics or try to gain more privacy, but most of the Chinese population is mostly focussed on their standard of life and the economy. ‘In Europe, we’re used to speaking our mind when the government makes a mistake, but that isn’t how things roll here’, Michel adds.