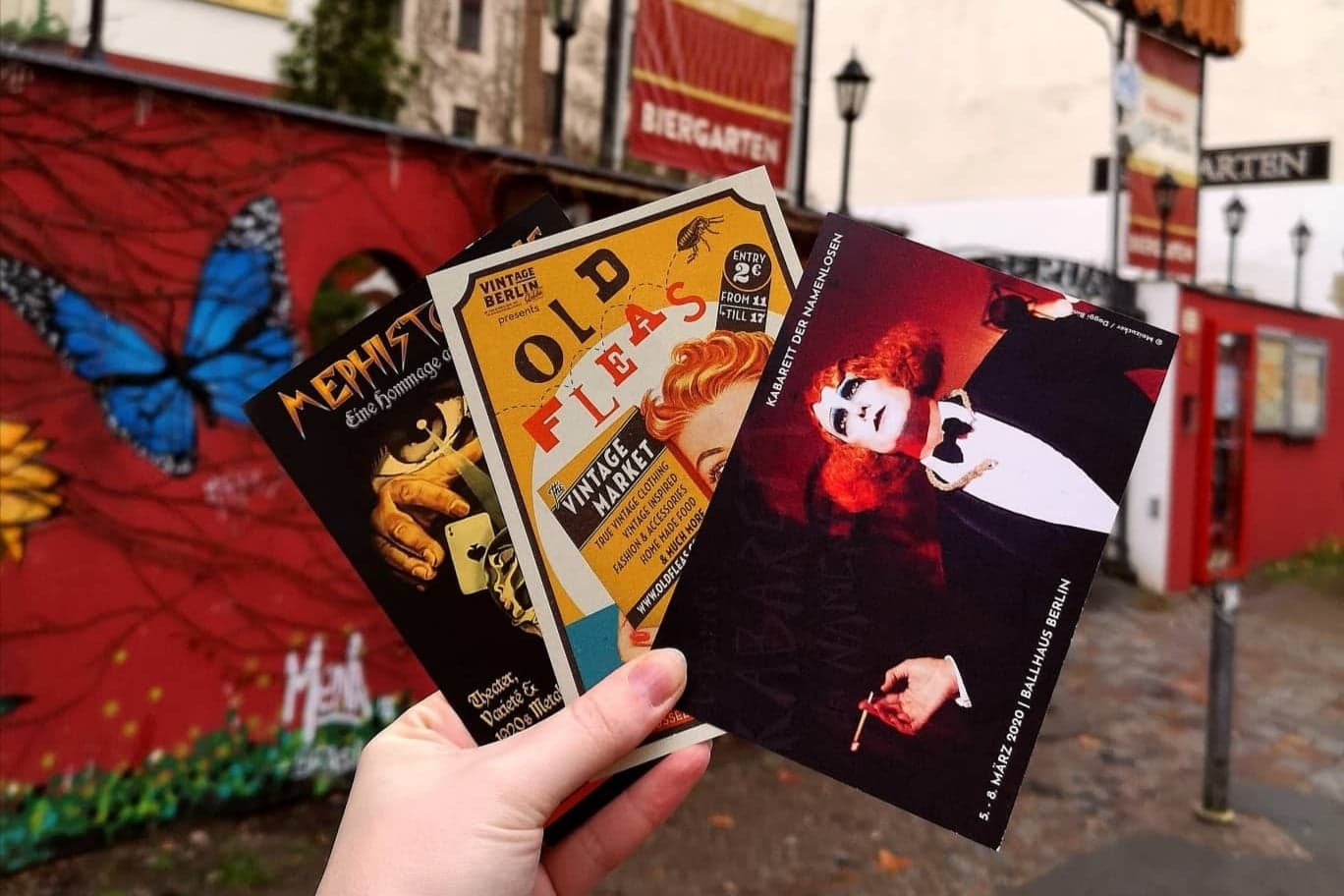 Mitte – Once an inn with a coffee garden, now a ballroom in roaring twenties style. Ballhaus Berlin has undergone quite a transformation over the past decades.

The Ballhaus Berlin finds its origin in the Chausseestraße, or how the locals called it ‘Feuerland’ (the burning land). The Ballhaus website describes the former scene in 1900 as ‘factories surrounded by burning chimneys, electric sparks, thundering hammers, shady houses of the poor, cemeteries and damp housing estates.’ After this period the Ballhaus took place here. In 1905 the building was used as an inn with a coffee garden called “Zum Alten Baden”. It survived the chaotic times of war and revolution and entered into the Berlin world of amusement temples and “Pläsierkasernen” (amusement barracks) as they called it. This took place in the roaring twenties of the last century. A popular German TV-format called “Babylon Berlin” turned the ballhaus into their set to capture images from this era as accurately as possible. The Chausseestraße had been transformed from a poor factory district to the northern centre of the city. Where it became a lively business district during the day and an entertainment centre at night. Then, of course, the war arrived. Which changed the whole neighborhood.

From post-war Berlin to the present

The ballroom survived the war. Afterwards there was room for entertainment again and the “Behrens Casino” opened in 1949. They used the ballroom and hosted grand parties here. These parties became very popular around the whole neighborhood of Mitte. After this glorious period, the building became state property. It was renovated in 1975 and was renamed the “Ballhaus Berlin”. Once again the whole building came to life and a golden age came for the Ballhaus. Everyone danced in beautiful costumes under a disco ball, there was flirting and communicating through telephone cables connected to various tables. Unfortunately, it didn’t last long. Incomes dropped and the Ballhaus remained stagnant for a few years. Then came the current team that was enchanted by the charm of the Ballhaus. They wanted to transport people back towards the charm of the older days. The people who came in could relive the feeling of the roaring twenties. They kept as much as possible preserved and intact. The sense of the past is even more revived by the great plays that are being performed there now. You can also visit flea markets and experience concerts. The building is the ultimate location for young people to enjoy art and culture from the past and the present.

To fully grasp what the Ballhaus is about, you can listen to our story here:

The history of the Museum für Naturkunde starts a little while after the founding of the Friedrich-Wilhelms-Universität (the university of Berlin) in 1810. The university needed a building where they could store their collections as they had been growing rapidly. Architect August Tiede was given the honour to design the building. The official opening of the museum took place on December 2nd in 1889 in Invalidenstraße. It was Kaiser Wilhelm II who opened the building.

As German colonies, such as present-day Rwanda, Burundi and Namibia to name a few,  were explored by researchers, the Museum für Naturkunde soon became too small to house all the collections. Between 1913 and 1917 a new wing was added to the north-facing side of the museum. The North Wing now looks different though, since it was renovated between 1918 and 1925.

In 1942, the museum staff started moving items from the collections to the building’s basement. A considerable dinosaur skeleton for example was moved to the basement. The skeleton stemmed from an expedition in southeastern Tanzania. This continued in 1943. Several items were also moved to different locations or even secured in a rented bank safe. In November that year, part of the collection was ruined by raids. The East Wing of the building was struck by a 500 kilogram bomb on February 3rd in 1945. This happened during a raid by US bombers at daytime.

The first thing one sees when walking into the exhibition space is a massive dinosaur skeleton. The museum has more to offer than skeletons alone though. It also has an enormous mineral and wet collection. A single ticket for an adult is eight euro and comes with a free audioguide. Due to the coronavirus your visit will have to wait until at least after April 20th. You can check the website of the museum for more information.

Did the ballhaus and museum spark your interest in Mitte? Than you will enjoy this map with a few extra hotspots in Mitte that are worth a visit.